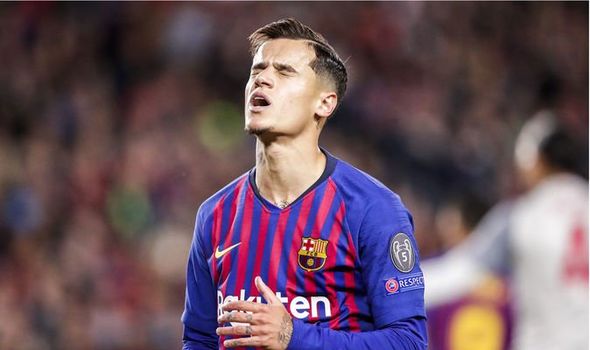 Philippe Coutinho is poised to make a return to the Premier League before Thursday’s deadline after Barcelona agreed that he can leave on loan.

Tottenham have made an approach as a possible replacement for Christian Eriksen – wanted by Manchester United – and initial talks have begun following Coutinho’s difficult spell in La Liga.

Former club Liverpool, Arsenal and Manchester United have all also registered an interest in the mercurial Brazilian who has struggled to recapture his form since moving from Anfield for £142million in January 2018.

The 27-year-old had been determined to make the move a success but has battled to win over supporters.

He wanted to stay and fight for his place but with Barcelona looking to accommodate new signing Antoine Griezmann, Coutinho and his representatives have started to explore alternatives. Coutinho is currently in Miami with the Barcelona squad as they prepare for the new season.

The Spanish champions will allow him to leave on an initial loan with view to making a deal permanent.

They have been looking for a loan fee of around £12million while the player earns £210,000 a week but Tottenham would be looking for those figures to be subsidised.

Barcelona hope a return to England can provide him with the platform to restore his reputation and crucially increase his value.

The Brazil international has no shortage of suitors but has spoken previously of his bond with former club Liverpool where he has strong emotional ties and good friends.

Tottenham manager Mauricio Pochettino worked with Coutinho previously at Espanyol while the midfielder was on loan from Inter Milan in 2012 and could prove the perfect catalyst to kickstart the 27-year-old’s career.

Jurgen Klopp has expressed reservations about accommodating Coutinho into a system that has worked effectively since the midfielder’s departure but he recognises fresh impetus could be utilised with his squad stretched by the demands of last season’s finish and a tough pre-season.

Arsenal would seem an ideal fit for Coutinho while Manchester United and Tottenham have been looking for that extra creativity. Conjecture over Christian Eriksen’s future with the Dane in the last months of his contract will have a bearing on their pitch.