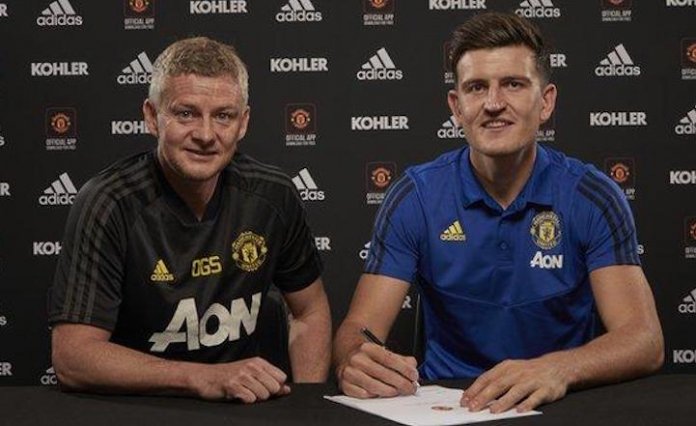 The 26-year-old has agreed a six-year contract at Old Trafford, with the option of a further year.

The fee for Maguire eclipses the £75m Liverpool paid Southampton for Virgil van Dijk in January 2018.

“When Manchester United come knocking on your door, it is an incredible opportunity,” said Maguire.

Maguire added: “From my conversations with the manager, I am excited about the vision and plans he has for the team.

“It’s clear to see that Ole is building a team to win trophies. I am now looking forward to meeting my new team-mates and getting the season started.”

Solskjaer said: “Harry is one of the best centre-backs in the game today.

“He is a great reader of the game and has a strong presence on the pitch, with the ability to remain calm under pressure.

“He will fit well into this group both on and off the pitch.”

Premier League clubs have now spent more than £1bn this summer with three days remaining until the transfer window closes.

United had a long-standing interest in Maguire but backed away from a deal 12 months ago because they felt the £70m asking price at the time was too high.

Maguire, who signed a five-year contract at Leicester last September, made 69 Premier League appearances for the club he joined from Hull City in 2017.

He began his career at Sheffield United, making 139 league appearances for the Blades before moving to Hull in 2014.

He was part of the side that earned promotion to the Premier League via the play-offs in 2016, but left for Leicester in a £17m deal following the Tigers’ relegation 12 months later.

Maguire made his England debut in August 2017 and helped his country reach the semi-finals of the 2018 World Cup in Russia, scoring in the 2-0 quarter-final win over Sweden.