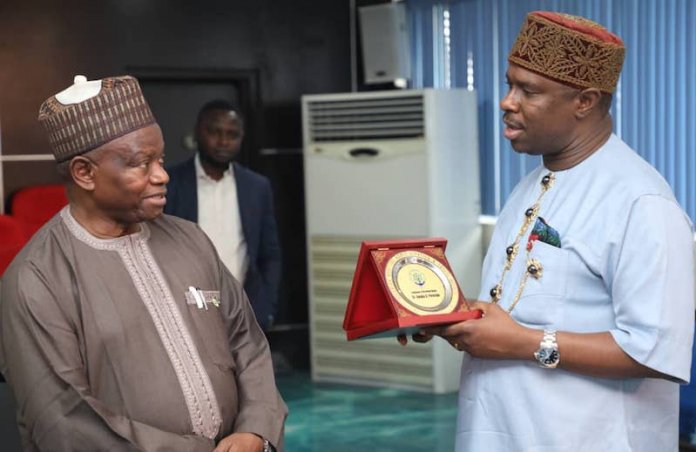 The Director-General of the Nigerian Maritime Administration and Safety Agency (NIMASA), Dr. Dakuku Peterside, has said that sports has a big place in the country’s development equation, as the spirit of fairness and unity, which sporting events evoke, is a vital ingredient of nation-building, just as excellence in sports can project a notion more.

Dakuku said the support of all and sundry, especially corporate Nigeria was needed to tap the huge benefits that abound in sports for the country’s greatness.

He stated these at the weekend in Lagos while receiving members of the Nigeria Olympic Committee (NOC) on a courtesy visit, adding that countries like Brazil, Argentina, Germany, England, the United States and even Kenya are using part of the greatness through sports for other benefits, including boosting their economy.

The NOC members, led by the President, Habu Ahmed Gumel, commended the NIMASA management for its strategic steps in support of the Next Level agenda of the President Muhammadu Buhari government.

The Olympic body commended the changes that have been engineered in the maritime sector, and sought the Agency’s support in bringing about the same spirit towards the country’s participation at the 2020 Summer Olympics in Tokyo. Gumel hinted of Team Nigeria’s aim for more gold medals at the Olympiad in the Far East.

Gumel along with Dakuku, enumerated many benefits Nigeria could reap from sports, to include amongst others, huge job creation opportunities in millions that can absorb our teaming youth, as it is in Europe and the Americas.

The DG, who received the NOC delegation alongside other members of the NIMASA management team, praised the efforts of the committee to ensure Nigeria got gold medals at the upcoming Olympic Games, in Tokyo Japan, 2020.

He told the NOC team, “We thank you for visiting the Agency and for your kind words in recognition of our modest accomplishments as we endeavour to contribute our own quota to the success of our President, Muhammadu Buhari’s Next Level agenda.

“In NIMASA, we work as a team, and that is why we have been able to accomplish the things we have done so far. With different persons playing different roles and making sure we keep our eyes on the ball, and in the spirit of sportsmanship, a huge atmosphere of success is created. This atmosphere is a crucial ingredient of nation-building”.

The NOC leader commended the Dakuku-led management team for its landmark achievements, including the provision of sea time for many Nigerian cadets under the Nigerian Seafarers Development Programme (NSDP).

He listed the functions of the committee to include ensuring the representation of Nigeria by the best available athletes at the Olympic Games, Commonwealth Games, and other international and continental tournaments.