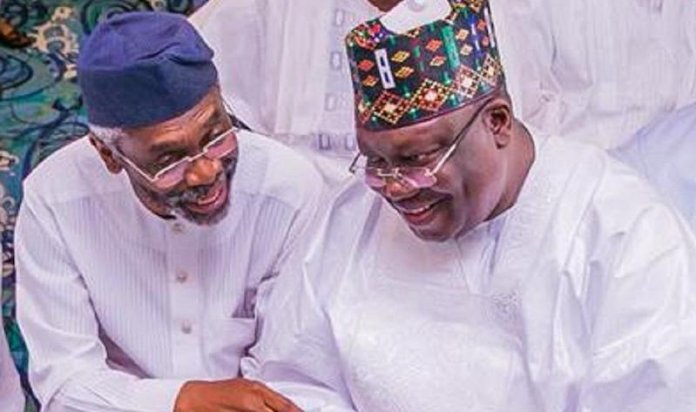 The ninth National Assembly is now ready for proper legislative work with the standing committees of both the Senate and House of Representatives in place, report Deji Elumoye and Shola Oyeyipo

Since the inauguration of the ninth National Assembly as well as the emergence of presiding and principal officers of the on June 11, the two chambers of the legislature had not been able to do much in terms of real legislative duties.

So, it was a welcome development in the last two weeks, when the leadership of both the Senate and the House released the list of Chairmen and Vice Chairmen of all their standing committees shortly before the lawmakers proceeded on a two-month annual recess.

The implication of this move is that the two chambers will now be able to consider bills that can be worked on by the legislators before referring them to relevant committees for necessary action.

Once the committees are inaugurated soon after the Assembly returns from its recess before the end of September, they will be expected to swing into action with their oversight functions in readiness for the Executive to present the 2020 Appropriation Bill by the end of September or early October.

This much was alluded to by the Senate President, Dr. Ahmad Lawan, during the confirmation screening of 43 ministerial nominees last week, when he expressed the readiness of the National Assembly to receive the budget proposal from the Executive, latest by first week in October.

This, he stated, would avail the federal legislators the chance to scrutinise the budget proposals and get the bill passed before going on Christmas break.

Thus, last Tuesday, the Senate President released the list of Chairmen and Vice Chairmen of the 69 Senate standing committees shortly before adjourning plenary till September 24, and after delaying its annual vacation by a week to consider the ministerial list submitted for confirmation by President Muhammadu Buhari.

The list of committee chairmen came less than two months after the inauguration of the ninth Senate on Tuesday, June 11. A breakdown of the committee chairmanship slots shows that Senators of the ruling All Progressives Congress (APC) got 49 slots while those of the opposition Peoples Democratic Party (PDP) had 20 slots.

Further breakdown of the chairmanship slots on zonal basis revealed that North West had 16, North East 11, North Central 10, South West 13, Southeast 9 and South-south 10 slots. Some of the Chairmen of the committees are core loyalists of the Senate President, who did their best possible towards ensuring that Lawan emerged President of the Senate in June.

Chairmanship of 16 out of the 23 of the standing committees considered to be ‘juicy’ were given to APC Senators while their PDP counterparts got the remaining seven.

The Committees are Appropriation chaired by Jibrin Barau (APC Kano North), a core Lawan loyalist, who instituted a suit in court for the adoption of open ballot system in the election of the ninth Senate presiding officers, although he later withdrew the case from court; Agriculture, Abdullahi Adamu (APC Nasarawa West), who headed the same committee in the eighth Senate; Interior, Kashim Shetima (APC Borno Central), immediate past governor of Borno State and one of the few Senators to associate with the Lawan project notwithstanding the fact that Lawan’s main opponent, Ali Ndume hails from his state.

The release of the committee chairmanship list brought a lot of disquiet among some Senators, who felt dissatisfied with the committee they were given. Although the concerned Senators were not bold enough to come out openly to protest the committee list, they however circulated an open letter to the Senate President, where they complained of being short-changed by the Senate leadership, despite the fact that they worked tirelessly towards the emergence of Lawan as Senate President.

According to him, by the rules of the Senate and by the constitution of the Federal Republic of Nigeria, the Senate President has been conferred with the powers and authority to appoint people into various committees of the Senate.

“The Senate President has exercised that power on Tuesday to the best of his knowledge and perhaps in consideration of the different background of the senators”.

On whether a committee is ‘juicy’ or not, he said, “I don’t know anything about juicy and non-juicy committees, what I know is that there are 69 standing committees of the Senate that have been constituted.

“In any case, juicy or non-juicy, I believe that it is a call to duty for Senators to serve their fatherland and to serve the nation meritoriously. So, in whatever capacity anybody has been placed, he has been called upon to merely render service.”

While some Senators were still complaining about their committees, Vice Chairman of the Senate committee on Petroleum (Upstream), Senator Ifeanyi Ubah, has expressed his willingness to serve in that capacity to develop the upstream oil sector of the nation’s economy.

In an acceptance letter titled, ‘The journey to technological growth and innovations in the petroleum upstream sector begins’, Ubah, who is the only Young Peoples Party (YPP) Senator in the upper chamber described the Upstream Petroleum Sector as a value chain, which comprises of oil exploration, drilling, production and development.

“As a first time and the only YPP Senator, it is deeply humbling to be accorded the privilege of being the Vice Chairman of the Senate Committee that is saddled with the task of overseeing the upstream sector of the Oil industry, which is the mainstay of Nigeria’s economy. I am indeed, most thankful and full of praises to Almighty God for granting me this rare opportunity to contribute to the growth of our Nation’s economy,” he said, thanking everyone and pledging to do his best.

The House had a fortnight ago constituted its 109 standing committees with a significant number of the ranking members of the House from the South-east extraction being particularly dissatisfied with the spread of the committee chairmanship as announced by Speaker Femi Gbajabiamila.

The Speaker, while naming the 109 committee chairmen implored those, who did not make the list to take it in good faith.

Although the name of the chairman of Gbajabiamila/Wase Campaign Organisation, Hon. Abdulmumin Jibrin, was also not on the list, sources close to the lawmaker, hinted that there were plans to adequately compensate him by the party leadership outside the House.

Reacting to the announcement, Hon. Ayika Valentine Ogbonna, said by leaving some qualified members out of the committee leadership, the lawmakers will continue to query why they were left out.

“Today is a defining moment for members of the House of Representatives. It is important in history. There has been suspense in the air on whether the news of members of committee will be announced. I told the leaders in a meeting we had that they already know. My opinion is that let it be fair.

“It is 360 members and we can say how do we balance, but there is a way to balance. I am from Anambra State, I have been in the state House of Assembly, two members of the All Progressives Grand Alliance (APGA) from my state, who haven’t held any political office, were given deputy chairmanship but I was not given anything.

“I expected that there will be repercussion but I never knew it can be this bad. But I can’t be gagged. This will be a catalyst for me to talk to this country about some of the nonsense that goes on.”

Talking about the possibility that the manner of selection of leadership of the committee may have impacts, he said it would have impacts but “The only thing one may not know is the scope of the disunity that may follow. A house divided against itself certainly will fall.

“Where members feel neglected – not carried along, people will start ganging up on how to protect their interests, because people elected you here and where you are unable to carry them along, then you have failed.Those who are favoured will try to defend the action but those who are displeased want to know why. Then we still want to know what committees one is assigned to.”

On his part, Hon Abonta said people should not be aggrieved by the distribution of the committee positions. He said since there were more people than the available slots, the Speaker couldn’t have satisfied everybody.

“It is not possible for Mr. Speaker to satisfy everybody. People should not express shock. We are 360; he has just selected about 100 people. Even God didn’t satisfy everybody. He made some people short, some tall, some fat and some slim. A lot of fourth term members were either left out of in places that weren’t their choice, but that does not mean that they will not be in the House and the new ones who got, they will learn.

The leadership of both the Senate and the House of Representatives will inaugurate the standing committees as soon as they return from their two-month annual vacation in September.