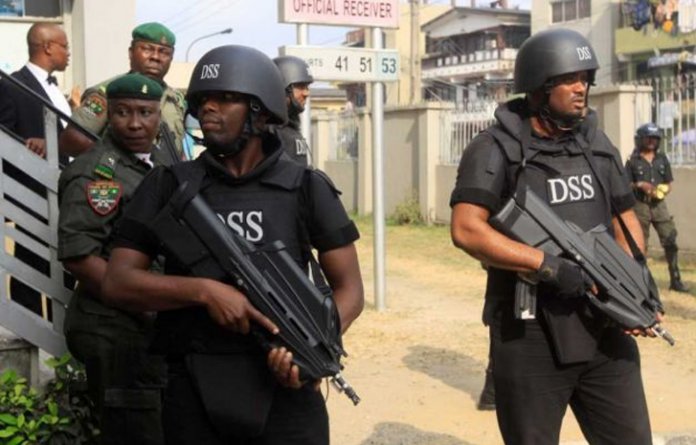 The Department of State Services (DSS) Sunday said that it would not allow any forceful take over of government in Nigeria.

DSS stated this in its first official reaction to a series of planned protests on the state of the nation tagged #RevolutionNow, scheduled for August 5, 2019.

Mr. Omoyele Sowore, presidential candidate of the African Action Congress (AAC) in the 2019 elections and convener of #RevolutionNow protests, was arrested by the secret police in the early hours of Saturday.

At a press conference on Sunday, DSS confirmed that Sowore, was in its custody.

The agency said Sowore, who is also the publisher of an online media outfit, SaharaReporters,  crossed the line and threatened public safety in his plan to organise a ‘revolution’ march.

The DSS aligned itself with  the position of the Nigerian Police that the planned ‘revolution’ march amounted to treasonable felony and act of terrorism.

The Police High Command had at the weekend  said the planned ‘revolution’ by the group, Global Coalition for Security and Democracy in Nigeria amounted to treasonable felony and act of terrorism.

The arrest attracted condemnations from Nigerians including former Vice President Atiku Abubakar, who described the arrest as kidnapping in disguise.

Addressing a press conference in Abuja, Spokesman of the agency, Peter Afunanya, confirmed that  the former AAC presidential candidate was detained at the Aso Drive Headquarters of the agency.

DSS said it would not watch such a march for revolution  take place without taking adequate steps to contain it.

“The DSS will not just sit by and watch someone or his group and cohorts threaten the peace and unity and constitutionalism of our beloved country. Whether  Sowore is with us  or not, the answer is in the affirmative. He is with us.

“Sowore has crossed the line. He has threatened public safety. Sowore has as a matter of fact threatened the peaceful co-existence of our beloved nation and the social harmony of Nigeria. What we are reemphasising is that  we will act within the law”, he said.

The agency’s spokesman said: “We will act within democratic processes to ensure that whatever threat he has given with any group will be contained. We are aware that he is also working with some persons outside Nigeria to cause disaffection, chaos and anarchy in the country and we will not stand by and watch that happen.

“We want to use this opportunity to reassure law abiding Nigerians, friends of Nigeria, citizens of the world that come tomorrow 5th of August 2019, there will be absolute peace in Nigeria, nothing will happen. There won’t be any revolution, the government that has been elected democratically will be in place. There won’t be any forceful take over of government.”