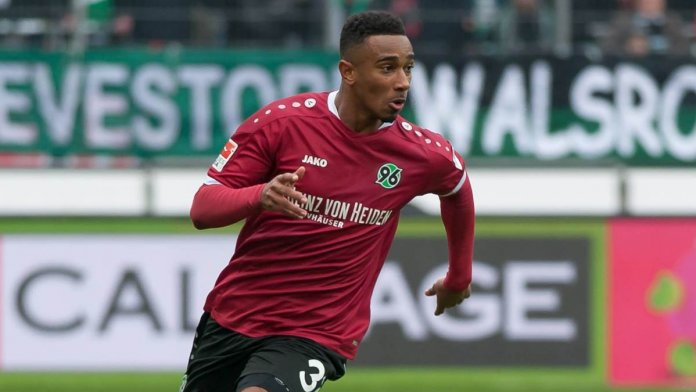 After he was convinced by Super Eagles German-born Manager, Gernot Rohr to dump the country of his birth- Germany and don the green, white and green colours of Nigeria, Noah Bazee was invited in 2017 for the Eagles’ friendly matches against Senegal and Burkina Faso. Injury, however, denied him the opportunity to play and since then, his direction had not been looked at but said he’s in regular contact with Rohr

FC Augsburg new signing, Noah Sarenren Bazee still harbors the ambition of playing international football for Nigeria and has revealed that he was in contact with manager Gernot Rohr ahead of the 2021 Africa Cup of Nations qualifiers.

The exciting winger was in contention to be named on the Super Eagles roster for the 2018 World Cup but struggled with knee problems for a significant period which prevented Rohr from including him in the provisional squad list for the tournament in Russia.

Despite the uncertainty surrounding his fitness, he honoured the invitation of the Nigeria Football Federation to train with the Super Eagles in London ahead of a friendly against Senegal in March 2017.

The 22-year-old has been following the progress of the Super Eagles and praised their performance in the recently concluded Africa Cup of Nations in Egypt.

Speaking to transfermarkt.de, Bazee said: ‘’I am still in contact with Gernot Rohr. The Africa Cup of Nations showed the great potential there is in the team. If I stay healthy and play consistent games, I’m sure I’ll get a new invitation.”

The German-born winger has 15 Bundesliga appearances under his belt since his debut on April 2016.

In 2017, Rohr met with the then 20- year-old forward in Germany ahead Super Eagles’ international friendlies against the Teranga Lions and Stallions in London.

Last month, Bazee made the switch from Hannover 96 to Augsburg for an undisclosed amount.

The 22-year-old, who has both German and Nigerian citizenship signed a contract till June 2024.

“We’re really excited about Noah’s move to Augsburg. He is an ambitious young player who we are convinced will help us in attack ,” said Stefan Reuter, FCA’s sporting director

“I want to take the next step in my development in Augsburg and I’m happy that the FCA board have put their trust in me. I’m looking forward to playing my first games in an Augsburg shirt,” said Bazee.

Bazee grew up in Walle near Celle, where he played for several clubs. In 2011, he moved to the Hanover region for TSV Havel and in 2013, he moved to Hannover 96.

He played in the U-19 Bundesliga and the Regionalliga Nord before making his debut on April 8, 2016, against Herha Berlin both in the squad, and together with Waldemar Anton also in the starting lineup.

On 18 June 2019, FC Augsburg announced that they had signed Bazee for the upcoming season. He penned a five-year contract.

He’s eligible to represent Nigeria through his father and Germany through his mother. He has so far been approached by coach of the Nigerian team to switch his allegiance to Nigeria. He was named to the Nigeria squad for the March 2017 friendlies against Senegal and Burkina Faso.