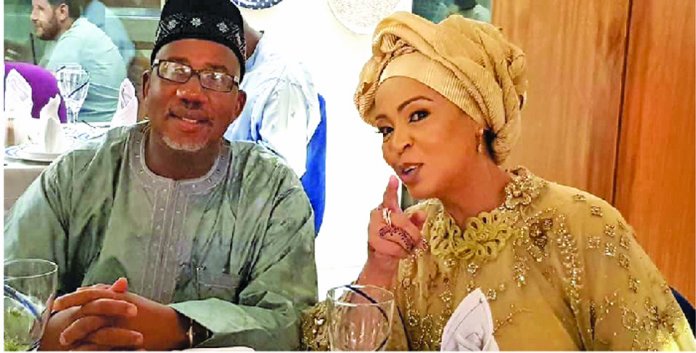 Governor Bala Mohammed of Bauchi State has found a new love. This time around, she is from Lebanon. Bala recently tied the knots with beautiful Lebanese, Natasha Mariana, at a modest ceremony in Lagos, writes Ferdinand Ekechukwu

Nigerian politicians and high ranking public office holders have seeming knack for new wives as complement to their staff of office. For instance since the institution of the present republic, quite a number of them have been registered. For Bala Mohammed, the amiable Governor of Bauchi State and a former member of the Senate, it would seem a special kind of relief measure after the rigours of winning an election.

The Bauchi Governor on July 26 tied the knots with Natasha Mariana, a Lebanese-Nigerian in Lagos, after about two months in office as the state’s chief executive. Colourful pictures of the Islamic ceremony show the couple in stunning look seated together and their guests. Mariana is the daughter of a long time Lebanese businessman and trader resident in Nigeria.

The modest ceremony took place at the Syrian Mosque in Ikoyi, Lagos followed by a dinner attended by relations and close family members and friends of the governor, including political figures and bigwigs within and across the confines of the country’s upper echelon of power. Though not much of her family background is domiciled in public domain, a Lagos socialite, Mariana becomes the second wife of the governor. Bala has four children from his first wife. Sparkling Mariana is looking good to give him more.

Bala was the Federal Capital Territory Minister during the Jonathan administration. Many in Abuja will always remember Mohammed for tackling the problems of waste and lack of potable water in the FCT during his tenure.

Born 5 October 1958, 60 year-old Mohammed studied English at the University of Maiduguri between 1979 and 1982, where he gained a BA. He then joined The Democrat as a reporter in 1983. He later worked in the public service as an administrative officer from 1984-2000.

He worked in the Ministries of Internal Affairs, Solid Minerals, Power and Steel and Transportation and Aviation. He retired as Director of Administration in the Nigerian Meteorological Agency. He then served as a senior special assistant to Isa Yuguda, who was governor of Bauchi State from 2000 to 2005. Bala was Director of Administration at the Nigerian Railway Corporation from 2005 to 2007. He was elected Senator for Bauchi South in April 2007 for the All Nigeria People’s Party.

Bala later fell out with Yaguda and decamped to the People’s Democratic Party (PDP). In March 2010, he accused Yuguda of being behind a move by people in his constituency to recall him from the Senate. He was among the first to call for declaring President Umaru Yar’Adua incapacitated and making Vice-President Goodluck Jonathan the acting President.