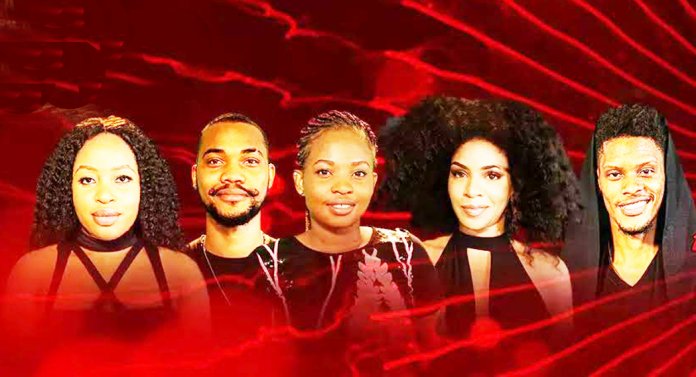 There is little tension in the Big Brother Naija House this week, even as four strong contenders  –  Jeff, Omashola, Mike and Tacha – are up for possible eviction on Sunday.  The introduction of five new housemates seem to have taken from the usual eviction jitters and thus reenergised the Pepper Dem Gang as the latest entrants livened the house. Ferdinand Ekechukwu reports

Was it another Shade of Pepper? Once, twice, thrice and the housemates keep getting hit by Biggie’s shocking twists with the addition of five new housemates. Cindy was the fifth new housemate to be introduced into the Pepper Dem house this week. With her arrival, came a mix of reactions from the other housemates in the game. It came after DStv channel 198 and GOtv channel 29 viewers and even the housemates thought the #BBNaijaTwist were over.

The #BBNaijaTwist obviosly meant to shake the house up with the latest entrants. Cindy came into the house when the older housemates were out in the arena. Before their Thursday Night Presentation, some of the housemates had told Biggie in their Diary Room session that they wish Big Brother would stop bringing in more housemates. If only they knew what Biggie had waiting for them in the house. Recall that vivacious actress and video vixen Venita, comedian Elozonam, creative director Joe, and tailor, Enkay were the first sets of  new housemates unveiled.

Oh, the look on their faces when they walked into the house to meet another product of Biggie’s BB Naija Twist. Amidst the warm welcome and shocked looks, one could tell that the housemates didn’t see it coming. The housemates weren’t the only ones that got twisted by Biggie’s surprise. The internet went nuts over the new additions to the Pepper Dem Gang.  Quite a lot of fans are ecstatic about the new arrivals.

Following the Nomination announcement, the Pepper Dem gang started the week with eviction jitters. However, the addition of new Housemates to the game lifted their spirits as it’s been evident from the truth or dare games and the gist aka bonding sessions they’ve had through the week. The Pepper Dem game just got tighter and we can’t wait to see the drama unfold.

For those who really missed it, ‘Tacharacteristics’ or ‘CharacteristicsTacha’ appears the latest appellation from the Big Brother Naija House after the Sunday Live Eviction Show drama that played out between the host Ebuka and controversial Pepper Dem gang member, Tacha. As usual, Ebuka had asked housemates questions just before the eviction proper. It got to Tacha’s turn and Ebuka asked her to give three characteristics a BBNaija winner should possess to which she answered “Tacha, Tacha, Tacha.” A rather confusing response as seen by the audience which sort of got social media buzzing as fans of the show expressed their likes or dislikes for the housemate even after Ebuka had moved on, thus, the birth of “Tacharacheristics” or “CharacteristicsTacha” which the female Pepper Dem Gang member now goes with.

Sisters’ Talk with Eyes on the Prize

Amidst the twist, Mercy and Khafi had a conversation about relationships during Jacuzzi session. Khafi’s sexual relationship with Gedoni has been a major topic on social media and also stirred up interest of celebrities. Mercy in a bid to be helpful told Khafi that even though she loves Gedoni, she should always remember the N60 million at stake in the game.

She stated that they are in the house for few months to get the N60 million and it comes first. Mercy admitted that love is sweet but told Khafi not to allow it to get into her head and make her lose focus after going through the rigorous audition for the reality show. To her, the money stays uppermost in her mind and Khafi should also adopt that mindset. Mercy also told Khafi that Gedoni wants her to blend more with other housemates and not be too clingy to him. Though Mercy revealed that she has fallen head over heels in love with Ike, she however insisted that she will pick N60 million before love. The words have been spoken, is up to Khafi to heed or not.

Journey to The 50s

The housemates have taken a journey to the 50s with their attires and stage play as their task for the week. The end of the journey will determine how far the housemates went and maybe will win or lose their wager at the end.