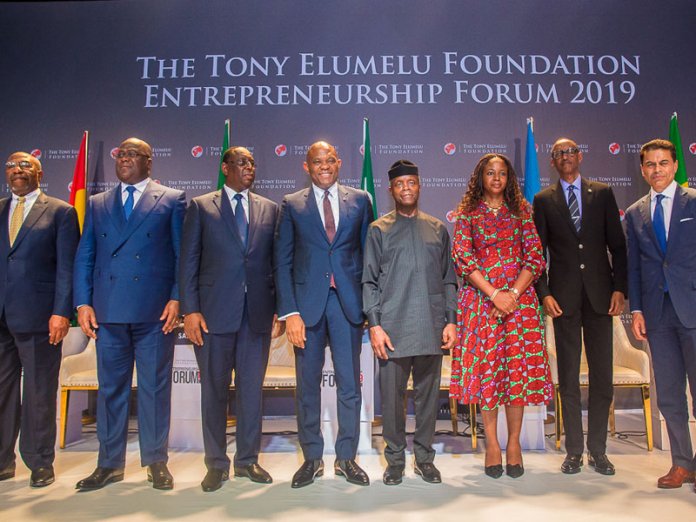 President Muhammadu Buhari, Saturday, said the federal government was challenged to create an enabling environment for young entrepreneurs to thrive. Buhari stated that the government had been inspired by the number of small businesses that benefited from the intervention efforts of the Tony Elumelu Foundation (TEF).

The President spoke in Abuja at the Founder’s Presidential Dialogue session during the two-day 2019 Tony Elumelu Foundation Entrepreneurship Forum. This year’s, the fifth edition of the forum, had the theme, “Empowering African Entrepreneurs.”

That was as President of the African Development Bank (AfDB), Dr. Akinwumi Adesina, challenged stakeholders, particularly, commercial banks, to take steps to make lending to young entrepreneurs less risky. And founder of TEF, Mr. Tony Elumelu, encouraged the youth to think self-reliance, saying seed capital is available for them at the foundation.

Buhari, who was represented by Vice President Yemi Osinbajo, said young African entrepreneurs had the potential to change the narrative about the continent, adding, “We must find young entrepreneurs and provide opportunities for capacity building.”

He stressed that in the age of the African Continental Free Trade Area (AfCFTA) agreement, which was recently signed by Nigeria, there was no better opportunity to explore the capabilities of small businesses in order to reap the full benefits of the agreement. He commended the foundation for its achievements in the lives of young entrepreneurs across the continent.

The President said, “By birthing this particular intervention, Tony Elumelu Entrepreneurship Programme (TEEP), Tony Elumelu has compelled us to focus on what really matters, our youth and their dreams.

“The message to Africa’s emerging business giants is a clear one, how and what can you contribute, like Tony Elumelu, to empowering the next generation, helping them to realise their own dreams?

“And you gathered here in this room, helping you write, rewrite and revise the next chapter of your continent-changing stories. Permit me a word to you, young entrepreneurs, I want to say to you that you live in the best of times. Always be suspicious of those who remind us of the ‘good old days’, they are probably suffering from a bit of memory loss.”

He noted that with opportunities provided by telecommunications, particularly the mobile phone and the internet, young entrepreneurs had the ability to change the world for the better.

According to Buhari, “Today is the most advanced moment in human history and your generation is the smartest that has ever lived. We are holding our breath for the incredible achievements you will make.

“There are the hundreds who are also here and these stories are just a few of the thousands told and experienced by entrepreneurs, whose lives have been touched and transformed by the Tony Elumelu Entrepreneurship Programme (TEEP). And even all of those thousands of inspirational TEEP stories are themselves just a representation, a fraction, of what is out there across the continent.

“A landscape emboldened by multitudes of young people, who are refusing to wallow in self-pity or frustration; who have realised that conquering the challenges of their environments are the milestones for outstanding success.”

As a way to encourage entrepreneurship in the country, the president said, “The promises that we have made of establishing Entrepreneurship Banks must be kept.

“Our school curriculums must emphasise, not just science, technology, engineering and mathematics, which we are doing now, but critical thinking and entrepreneurship.”

Buhari’s words of assurance came as Adesina challenged the banks to adopt measures that would make lending to young entrepreneurs less likely to involve financial loss. He noted that it was time to establish a Youth Entrepreneurship and Investment Bank to cater to the needs of young entrepreneurs.

The former Minister of Agriculture also said both government and the banks must fund young people with innovative minds to create enterprises. He said Gross Domestic Product (GDP) growth in recent times had not translated to job creation, with minimal impact on standards of living.

The AfDB president stressed that though GDP growth was important, “Nobody eats GDP. We need to look at the young people of our continent. We can’t keep postponing their future into the future. They are an asset and not a liability.”

Adesina said the challenges presently confronting the SMEs could be traced to market failure as well as government’s inability to play its role properly – a gap TEF has stepped up to bridge. He said it was high time African leaders embraced investment in youths rather than youth empowerment.

Speaking also, during a panel session moderated by CNN Host, Fareed Zakaria, Elumelu said self-reliance was crucial for the young African entrepreneurs, adding that the foundation has created the platform as well as provided them with seed capital to start up.
“The stage is now yours. We want to see you succeed,” he told beneficiaries of his support scheme.

But he pointed out that more partnerships were needed to scale up the programme to be able to accommodate greater number of beneficiaries.

“The way to support is to support for everyone to be self-reliant. We need to attract global investment to Africa using existing partnerships,” he explained.

The event was attended by heads of government from various African countries, including Presidents Paul Kagame of Rwanda, Macky Sali of Senegal, Felix Tshisekedi of the Democratic Republic of Congo, and the Prime Minister of Uganda, Ruhakana Rugunda.

About 3,000 young men and women were selected out of 216,000 applications from over 54 African countries for this year’s Young African Entrepreneur support.