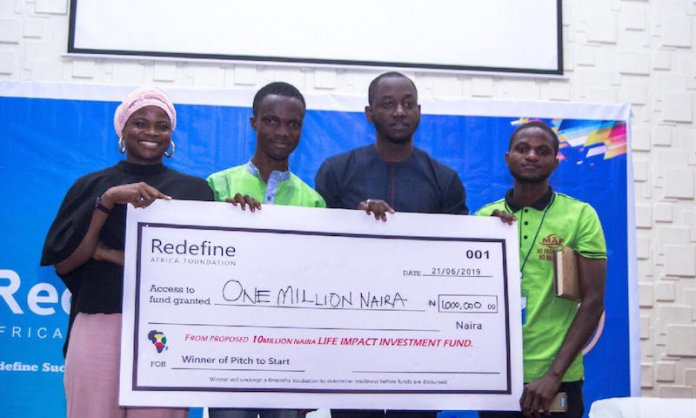 Social consequences of unemployment can be significant. Studies have proven that a high unemployment rate is directly related to increases in property-related crime. Unemployment can also affect the health of individuals and families. Also,some well meaning Nigerians has argued that the outrageous statistics of unemployment rate in Nigeria has resulted in several societal ills of internet fraud, drug abuse, prostitution, political thugery, and all sought of immoralities in the society. More so, triggers depression.

Prior to the these societal illnesses, the prestigious Redefine Success Summit is about personal business development to enable a different set of individuals who will not have to depend on employment for survival or rely on factors beyond their personal control for their ultimate success. Rather, with a clear definition of success and practical tool create more jobs and impact communities in the process.

Addressing the participants at the fourth edition of the just concluded Redefine Success Summit tagged ‘The Edge’, held in Lagos, the convener of the Redefine Africa Foundation (RAF), Mr. Sheun Onanusi reemphasised the summit has been annually organised since it inception as a platform to breed young entrepreneurs.

Onanusi concurred that unemployment has birth societal immoralities, which the summit has been mission to create job opportunities through entrepreneurs and providing financial backups to young Nigerians with business ideas.

He said: “We have been organizing this summit now for four years. What we want to achieve is that we wanted to create a platform where young Nigerians can listen to other Nigerians who are doing successfully well in their field. More importantly, we want an opportunity where we also create a platform for young Nigerians to express themselves, share ideas and whatever they want to achieve as an individual so that we can help them achieve those things.

Since we have started this summit, we have had success stories. We have one of the attendees who three months after the summit was able to scale and maximise profit in his business. We have other success stories of connection in terms of business deals between attendees.

“The name is redefined success summit and social ills at the moment everywhere in the society. One of the reasons why those social problems get escalated and more people had attached to it is because at the end of the day, we have a wrong definition of success. Most of the success we see is by logo benz or driving a big car. We need this summit to create an opportunity for us start redefining mindset of people. I’m not saying we shouldn’t drive a car, offcourse we need to. Successful speakers attending the summit drive cars but what we are saying is they shouldn’t go the shortcut or the calculated ways.

“It’s not about doing this for ten years before you get to that point. We have heard success stories that with three to five years they are achieving and making millions. We have redefine how we get those things which very important.

“We are getting unemployed Nigerians who have an idea, we are funding them to start the idea. By so doing, we are creating a job for that person but even more, one of the things we have been doing is if we are going to fund you, then you have to look for an apprentice for a certain period of time so we close the skills gap as well”.

Onanusi boastfully disclosed the summit growth over the years have been awesome, projected in the next five years the platform would have created about 20,000 job and employed thousands of Nigerian youths.

“The next five years at the very least created about an hundred entrepreneurs and we will be glad to fund them to the next level. Then, they would have gone to second and third injections into their businesses. We will see that these people would have created about 10,000 to 20,000 jobs within the next five years from our funding. Again, the summit itself will be bigger and we will have a bigger platform.

“The drive for us here is to see that we are all going to build this country together. It’s a collective. We are complaining about the government but we need to start from us and hopefully we will get the right set of people in leadership. What we are doing is impact base and social base entrepreneurship. We also look at community projects and we do it together as part of the process because it’s important we all collectively do it” he said.

A Motivational Speaker and a Leadership Expert, Fela Durotoye, a guest speaker at the summit applauded the convener of the Redefined Success summit.

Durotoye commented that honcho success summits in a country like Nigeria will change the mindset of Nigerian youths towards success, breed them as one of the successful entrepreneurs in the country and reduce drastically societal issues calling for urgent attention.

“The redefine summit is something that should be celebrated. Sheun is someone that should be encourage for the passion he has for this country in helping young people and helping us to redefine success from the way ways we have known traditionally. Redefining what success is what I think Nigerians need at this time.

“One of the thing that happen is that in the quest for success especially material success in Nigeria, many people are doing whatever they need to do to attain success. Redefining success and the pathway to success is also about using successful people for them to tell their stories. I think the young people that attended this summit have learned how to be successful from the talents and gifts. More importantly, add values to the society. And in doing that, they will start businesses that will grow and by so doing iut will resolve issues of internet fraud” he said.

He further said the blame of the rise of internet fraud in the society shouldn’t be shifted on the government alone but the social groups in the society who are also meant to impact morals to young Nigerians.

Lending his voice to the issue of suicide in the country, Durotoye said, success summits is one of the antidote to reduce suicidal incidences when depression from idleness and employment are conquered.

“I think the rise of internet fraud is the failure of the society. One of the pillars of putting the right values in the society is government. But there are other peers like; the family, educational system, religious institutions and other organizations. So we look at it and think of any other pillars that should infuse values that failed and not only the government but we know we need to get the right values into the next generation which is very important.

Absolutely this summit in one way or the other reduces incidences of depression and suicide. The way success was redefined at the summit is making people understand that success is not only by achievement or accolade but through fulfillment of purpose. Anybody that is fulfilling purpose will most likely find true joy which eradicate the great scourge of depression and suicide, seeing people addicted to drugs and all. These things will definitely going to stop if we can have more of this summit” he said.