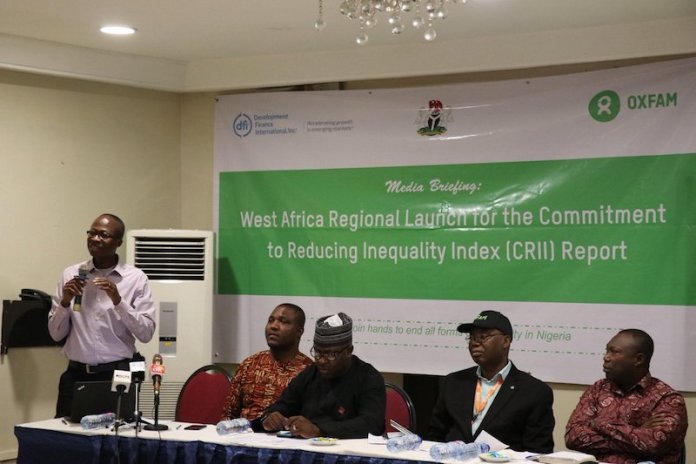 Oxfam in Nigeria has called on the federal government to fast-track action on the approved new National Tax Policy in order to tackle corporate crimes.

Oxfam Country Director, Constant Tchona, made the call in Abuja at the public unveiling of the ‘Fair Tax Index report and the Commitment to Reducing Inequality Index (CRII)’ report, with the theme ‘West Africa Inequality Crisis: The Fight Against Inequality through Progressive Taxation’ in Abuja.

He said Oxfam had developed policy recommendations and strategies, saying it would be used to advocate for a fairer tax system that helps to redistribute prosperity from the richest in the society to the very poorest.

Tchona, explained that a 2015 Oxfam’s report highlighted the inefficiency of Nigeria’s tax incentives where it submitted that the country loses N580 billion annually through tax incentives to multinational corporations.

To put this in perspective, he noted that the health budget was only one third of this amount in 2015.

The country director added that Nigeria needs to rework its strategies and sets its economic priorities right by investing in agriculture, manufacturing and infrastructure rather than waste its hard-earned resources on unproductive and redundant tax incentives.

According to him, “The records show that about 30 per cent of companies in Nigeria are involved in tax evasion and also 25 per cent of registered companies in the country are not paying tax.

“Taxpayers often opt to negotiate with corruption tax administration staff in return for gratifications and reduced sums to the coffers of the government.”

Tchona said the fiscal incentives granted with the hope of stimulating investments into the country’s economy were eroded with poor governance and lack of transparency, especially when the central bank had confirmed that there was no cost benefit analysis to justify the exemptions and when there was no check in discretionary powers residing with the Executive in granting exemptions.

He stressed that the Voluntary Assets and Income Declaration Scheme (VAIDS) was designed to increase tax revenue by encouraging voluntary disclosure of any previously undisclosed income liable for tax and to bring as many people as possible into the tax net. This, he said resulted in $5 million extra revenue which was about N1.8 billion, but this was only 10 per cent of the expected amount.

Tchona, however, called on the federal government to opt for aggressive taxation of the informal sector in order to meet the revenue target.

“There is need for the Nigerian government to fast-forward action on the New National Tax Policy approved and clamp down on corporate crimes.

“New legislation and rules to cope with current realities should be enacted along with introduction of cutting edge technology.

“The National Assembly should enact a law to punish enablers of tax evasion such as lawyers, accountants and bankers and should be made to face fines of up to 100 per cent of tax evaded

“The National Assembly should enact law that will criminalise totally the actions of middlemen- banks, auditors and lawyers that facilitate illicit financial flows. When such professionals act contrary to existing regulations, they should be held accountable in Nigeria.

“This can be enforced through strengthened professional association bodies.”

While presenting his paper on, ‘Understanding the Impact of Inequality in Nigeria and Policy Recommendations,’ the Country Director of Plan International Nigeria, Dr. Husseini Abdul, said tax was not only about income for government, but one of the best way to tackle inequality

According to him, “We can’t have conversation about the development of this country without talking about inequality. The trajectory of development is a problem and economic policies are needed to deal with them.”

Nigeria Employers Consultative Association (NECA) has called on the government to make the country more productive.

The association also stressed the need for political will and constitutional reforms that would eliminate states and local governments’ dependence on the monthly revenue allocation in Abuja.

It further stressed the need for state governments to think outside the box in order to be economically viable and sustainable in the long- term, eliminate high cost of governance and frivolous expenditure under the guise of security votes.

Speaking at the 62nd Annual General Meeting (AGM) of the association, the second Vice President of NECA, Mr. Mauricio Alarcon, expressed concern that the Presidential Business Environment Council (PEBEC), established to remove bureaucratic constraints to doing business in the country, seems not to be achieving its mandate.

According to him, “In business friendly climes, regulators are meant to facilitate business growth with consequential positive effects on employment generation, security, poverty alleviation and higher GDP growth rate.

“However, the experience in Nigeria happens to be different. Regulators have turned themselves to income generating entities, not necessarily always for government’s coffers, with penchant for sanctions without recourse to due process.

“Perhaps, some government agencies derive pleasure when business shutdown or is it that the successes of the chief executives depend on how many businesses are sanctioned or closed down?”

This trend, he noted would only increase the rate of unemployment, escalate insecurity, reduce inflow of foreign direct investment and further push the country into the abyss of underdevelopment.

Alarcon, however called on the government to call to order, regulatory agencies that he said had constituted themselves as clogs in the wheel of the ease of doing business, saying such agencies should not be measured by how much income they generate or how many organisations they are able to sanction, but how many businesses they facilitated and helped to succeed.

While commending the various initiatives and social intervention programmes of government aimed at poverty alleviation, the vice president regretted that these by the poverty index was insufficient.

“As much as social interventions have their place in poverty alleviation, we charge government to deepen its intervention by creating an enabling environment for large, medium and small enterprises to thrive as the long term solution to poverty include job creation, improved standard and quality of education, health and general wellbeing of our people, increased access to finance and policies that encourage investment. These remedies, in addition to current efforts, would significantly lift Nigerians above poverty level,” Alarcon stressed.

The Vice President, Professor Yemi Osinbajo, who was represented by a former Special Adviser to the President on Economic Matter, Dr. Yemi Dipeolu, said the private sector has a big role to play in ensuring the growth and development of the economy, adding that the federal government was committed to improving major sectors through creation of jobs, improving infrastructures, among others.

Other stakeholders at the programme said there was need to engage government on policy that would continue to sustain economic growth and development, adding that with increasing role of the private sector, Nigeria should be seen as a business partner by other countries rather than a development partner.

The programme witnessed the induction of new organisations into the association and certificate of membership were given to them.