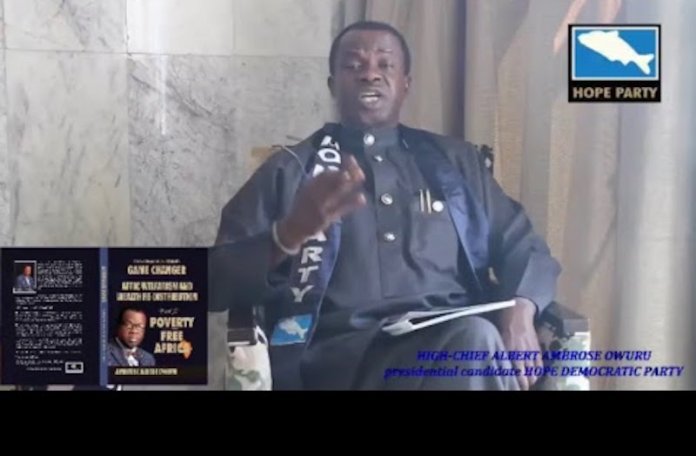 A witness called by the Hope Democratic Party (HDP), Yusuf Ibrahim, yesterday, told the Presidential Election Petition Tribunal in Abuja, to declare candidate of the HDP, Chief Albert Ambrose Owuru, the winner of the 2019 presidential election.

The witness, who appeared before tribunal to give evidence, predicated his call for declaration of Owuru as president on a referendum conducted in the country on February 16, the day the presidential election was initially slated.

Ibrahim who was led in evidence by HDP’s lawyer, Eze Nnayelugo, told the tribunal that a referendum conducted on February 16 placed Owuru winner by over 50 million Nigerians.

The witness condemned the shift of the presidential election from February 16 to February 23 by the Independent National Electoral Commission (INEC) and described the election of February 23 as illegal, unconstitutional and a nullity because the conditions for shifting election were not met by INEC.

Ibrahim further informed the tribunal that ‘Citizens Observers Referendum Election Rights Protection of Nigeria conducted the referendum across the country and that Owuru of the HDP won and emerged as Nigeria’s president.

The witness insisted that the referendum was held physically and not in the spiritual realms as claimed by President Muhammadu Buhari, All Progressives Congress (APC) and INEC.

Ibrahim tendered some documents, among which are, Citizens Observers Referendum Election Rights Protection of Nigeria, final list of the presidential candidates and copies of major newspapers to buttress his claim on the referendum.

Besides, the witness also alleged unlawful exclusion of the HDP in the February 23 poll by INEC refusal to put its original logo on the ballot papers as done to other parties by INEC.

Under cross examination by INEC’s lawyer, Yunus Usman (SAN), the witness admitted that INEC has sole responsibility of conducting election for the country but however said that the electoral body lacked powers to shift the election the way it did on February 16, which he said prompted Nigerians to opt for a referendum.

However, when asked to produce the results of the referendum before the tribunal, Ibrahim said it was not with him in the tribunal, and that he has submitted it to his lawyer.

Also when cross examined by APC’s lawyer, Akin Olujimi (SAN), the witness said that the referendum of February 16 was not celestial exercise or through the internet, adding that it was a physical exercise.

Attempt by the HDP to call another witness, who was subpoenaed was unsuccessful because the witness has no deposition on oath.

Meanwhile, the party has closed its case while the tribunal has fixed August 5 for parties to adopt their final address. This followed the decision of INEC, Buhari and APC not to call any witness to debunk claims of the HDP but to rely on the party’s sole witness for their defence in the petition.

Owuru and the HDP had in their petition filed on March 7, 2019 canvassed nullification of the election of President Buhari on three grounds that they were unlawfully excluded in the poll, and that the February 23 poll was illegal, unconstitutional and a nullity because INEC has no power to shift the poll and that a referendum conducted on February 16 produced him as winner.