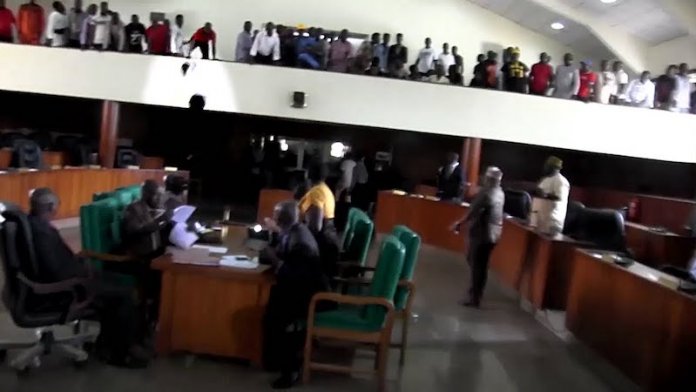 The resolution of the House of Representatives on Wednesday, July 17th 2019, directing the Inspector-General of Police and Director-General of the Department of State Services, to shut down the Edo State House of Assembly, is one legislative episode that is worth pondering over. It defies every legal explanation known to our constitutional jurisprudence in Nigeria.

The resolution was a by-product of a motion moved by Prof. Julius Ihonvbere, the member representing Owan Federal Constituency in the House of Representatives. The underlying prayer of the motion was for the House of Representatives to take over the legislative activities of the Edo State House of Assembly on account of the grievances of some members-elect loyal to the National Chairman of the All Progressives Congress (APC), Comrade Adams Oshiomhole. Unable to immediately grant the prayer contained in the motion paper, the Speaker set-up a fact-finding Ad-hoc Committee, with a mandate of completing their assignment within one week from the date the motion was moved. It is on the basis of the recommendations of the fact-finding Committee, the House of Representatives made its resolution, which also directed the Governor of Edo State to issue a “fresh proclamation within one week.”

Arising from the foregoing, it is instructive to note that on the 3rd of July, 2019 (several days before the motion of Prof. Julius Ihonvbere was moved), the Federal High Court, Benin, had issued an Order restraining the Inspector-General of Police and other affected persons from meddling in the activities of the Edo State House of Assembly, pending the determination of the motion on notice. It is sad to note that the Oshiomhole-backed-lawmakers-elect who went to Abuja to lobby members of the House of Representatives to take over the Edo State House of Assembly had previously filed a matter at the Edo State High Court. This matter which is before Justice Erhabor of High Court No. 5, Benin City, is awaiting hearing.

The matter filed on the 25th June 2019, (as Suit NO. B/81OS/2019), came up on the 8th of July, 2019 for hearing of the ex parte application brought by the lawmakers-elect. The application was adjourned to the 18th of July, 2019 for Ruling. In view of the inability of the lawmakers-elect and their sponsors to secure an ex-parte order on the 8th of July, 2019 they took their grievances, which was subjuice, to the House of Representatives via the motion of Julius Ihonvbere moved on the 9th of July, 2019. In moving his motion, Julius Ihonvbere refused, failed and neglected to inform his fellow House of Representatives members of the failed attempt of the Edo lawmakers-elect to secure an interim injunction on the same subject matter of the motion he was sponsoring. It is noteworthy that on the return date, the application for an ex-parte order by the Adams Oshiomhole- backed Abuja lawmakers-elect was refused by the Edo State High Court.

Moving forward, it is pertinent to note that during the visit of the House of Representatives fact-finding committee to the Speaker and members of the Edo State House of Assembly few days ago, the Federal High Court’s restraining order was brought to their attention. It is, therefore, distasteful, dishonourable and despicable for the committee to have recommended that the Inspector-General of Police, among others, should shut down the Edo State House of Assembly, contrary to the subsisting order of the Federal High Court. The question that readily comes to mind is simple. Is the House of Representatives now an appellate court, conferred with the jurisdiction to review or upturn an order of a court of competent jurisdiction? The simple answer lies in Section 4(8) of the 1999 Constitution of the Federal Republic of Nigeria, as amended, which provides as follows:

“Save as otherwise provided by this Constitution, the exercise of legislative powers by the National Assembly or by a House of Assembly shall be subject to the jurisdiction of courts of law and of judicial tribunals established by law, and accordingly the National Assembly or a House of Assembly shall not enact any law that ousts or purports to oust the jurisdiction of a Court of law or of a judicial tribunal established by law”.

From the above provision of the Nigerian grund norm, it is crystal clear that the exercise of legislative powers by the National Assembly, which has the House of Representatives as its lower chambers, “shall be subject to the jurisdiction of courts of law…” and anything short of this, is ultra vires, unconstitutional, null and void. It is even sad to further observe that the House of Representatives in its resolution, under review, stated that: “All actions taken by the 7th Assembly members should be declared null and void pending proper inauguration”. This statement is nothing but a legislative exercise of judicial powers and must be condemned by all lovers of the rule of law, separation of powers and independence of the judiciary. It is pertinent to note that while the House of Representatives was making its resolution for the police to take over the Edo State House of Assembly, members of the Senate Ad-Hoc Committee on the same subject matter was in Benin City to carry out their fact-finding assignment.

It is worth emphasising that the motion moved by Julius Ihonvbere was brought under Section 11 of the 1999 Nigerian Constitution. However, by virtue of the clear provision of Section 11(4) of the 1999 Nigerian Constitution, as amended, the legislative powers contained therein is not unilateral, but bilateral. Precisely, it is supposed to be the joint responsibility of the National Assembly to publish the said resolution and not just the House of Representatives, which acted unicamerally.

In concluding this piece, I must commend the immortal words of Atanda Fatayi-Williams C.J.N who in his memoirs said; “in a situation where the rule of law is jettisoned, anarchy will be the sole beneficiary”. The authorities of the Federal Government of Nigeria, including the Nigerian Senate must as a matter of urgent necessity ensure that Edo State is not thrown into an avoidable political turmoil, which the resolution of the House of Representatives has unwittingly jumpstarted, in theory. It was a similar interference by the post-independence Federal parliamentary Government in the activities of the defunct House of Assembly of Western Nigeria that led to the crisis in the Western region, which eventually created a fertile ground for the collapse of the first Republic. The Nigerian judiciary, which is constitutionally saddled with the duties and powers of adjudication and legal interpretation should be allowed to function without legislative meddlesomeness or interference. A stitch in time saves nine!
–––Adaze Andrew Emwanta is a constitutional lawyer and law lecturer in the Faculty of Law, University of Calabar, Calabar Nigeria.