The anti-insurgency military operations in the North-east have suffered a setback with the attacks on troops in Borno and Yobe States in which a total of two officers and 26 soldiers were killed.

An army commander, of the rank of Colonel and 20 soldiers were reportedly killed in an ambush by Boko Haram, in Yobe State while another Colonel and six others, including a Captain, died in Borno State.

The attacks came amidst heightened worries over the security situation in the country, which has triggered a national conversation on the urgent need for the federal government to stem the tide.

As part of concerted efforts to find solution to the insecurity in the country, the Ooni of Ife, Oba Adeyeye Ogunwusi, visited President Muhammadu Buhari and urged him to beef up security in the South-west, where he claimed strangers have taken over the forests in the region to unleash violence on the people.

Also yesterday, the Senate, again, was worried about the security situation in the country, saying it is creating a humanitarian crisis in Northern Nigeria.

The death toll in the latest attacks in Borno and Yobe states, brings to 52, the number of soldiers killed within two months by the combined forces of the Islamic State for West Africa Province (ISWAP) and Boko Haram in the North-east.

In the Yobe attack, the troops were ambushed on Wednesday while on their way to the headquarters of 29 Task Force Brigade of the Nigerian Army located in Benisheik, as they returned from Borogozo in the state.

Military sources in the theatre of war, said the brigade commander, a colonel and 20 soldiers, were killed when they ran into an ambush.
Sector 2 Command of Operation Lafiya Dole has sent reinforcement to the area while bodies of the soldiers were moved to the 7 Division Headquarters in Maiduguri.

Army spokesman, Col Sagir Musa, said on phone that the army would issue a statement on the attack but had not done so as at the time of filling this report.

In the Borno attack, the Army Colonel, a captain and his four escorts, as well as driver, were killed by rampaging Boko Haram insurgents between Mainok and Jakana on the Damaturu/Maiduguri highway.

Sources said the Colonel and his convoy ran into some fleeing insurgents after a heavy gunfire exchange with soldiers at Jakana in an attack that lasted for hours.

A military source, who spoke to THISDAY on condition of anonymity, denied insinuations that it was an ambush.
He said: “The Colonel with his escort was just unlucky to run into the insurgents on his way from Maiduguri to Damaturu without the knowledge of the ongoing attack on the highway.”

The source confirmed that the Colonel was from 29 Task Force Brigade of Sector II of Operation Lafiya Dole.

Meanwhile travellers have continued to experience hardship on the Maiduguri-Damaturu highway as soldiers mostly closed the use of the highway at any time they want.

Reacting to the attack, spokesman of the Nigeria Army Sector II, Lt. Njoka Irabor, said: “The information available to me is still sketchy. I honestly don’t have any details now but I will get back to you as soon as possible.”

In recent attacks on troops engaged in the war against Boko Haram in the North-east, 28 soldiers, including a commander, were killed in two separate attacks in June in Gajiram Ngazai Local Government Area of Borno State while 18 soldiers and six others were wounded when insurgents sacked a military base in Kareto, North-eastern part of the state.

Four different brands of armoured personnel carriers and other military hardware were reportedly carted away by the insurgents who overran the military bases.

The Ooni of Ife also expressed concern yesterday about the security situation in the country, saying drums of war are sounding loud in all parts of the country.

He called on the president to beef up security in the South-west, where he claimed strangers have taken over the forests, which serve as their base for criminal activities.

The monarch, while answering questions from State House correspondents after holding a closed-door meeting with the president, said baseless killings, banditry, kidnapping, armed robbery and insurgency in different parts of the country were sounds of war which must be quashed now before degenerating into full-scale war.

He said he came to see the president on behalf of other traditional rulers in the zone over the situation because the Yoruba do not want war but prefer to work with the government to fish out the criminals.

He said the president shared the same view with them as he admonished politicians to tread softly to avoid calamity, adding that Buhari has directed all heads of security agencies to visit all traditional institutions in the South-west.

“I came to speak on behalf of other traditional rulers. The issue at hand in the South-west is real – issue of insecurity. We that live in the remote and rural areas of the South-western part of the country, most of the bushes are occupied by strange people. We decided to work with the government to fish them out.

“Everybody is beating the drum of war. We don’t want war. Who can stand war? We want something better for our youths. We should better use them for something good other than shouting war and anarchy. We don’t want that.

“We told the president that he is on the same page with us. Politicians should be careful not to throw things out of proportion. We should make sure things are right and the president has given good directives to security chiefs, including the Inspector General of Police, to visit all traditional institutions in the South-west.” he said.

He called on the people to support the security agencies in fishing out the bad eggs among them.
The Ooni also warned against watching the situation to deteriorate into a state of anarchy.

He expressed concern that given the gravity of insecurity ravaging the South-west, the youths, in view of their exuberance, could be tempted to take laws into their hands.

He also said Buhari told him that in due time he would tell his own story of Ruga, a controversial cattle colony agenda that was recently suspended, saying the president lamented that the issue was misconstrued and hence, the necessity to tell his own side of the story.

Ooni also clarified his earlier statement that the Yoruba should defend themselves, saying he meant that the South-west region needed the federal government’s presence to help guarantee the people’s protection.

According to him, his visit to the president is in pursuit of that call for self-defence.

He restated the preparedness of the Yoruba to collaborate with the federal government to combat the menace of insecurity.

The Senate yesterday also frowned on the mounting insecurity in the country and its effects, especially in Northern Nigeria.
It said the growing insecurity was creating a humanitarian crisis in the northern part of the country.

The upper legislative chamber said the ongoing attacks by the Islamic State in West Africa (ISWA) in the North-east, farmers-herders clashes in North-central and North-west, as well as rampant cases of banditry, were fueling crises in the country.

To address the issues, the Senate has mandated the Federal Ministry of Finance to release funds to the National Emergency Management Agency (NEMA) and Refugees Commission to enable them to address the humanitarian crisis.

The Senate also urged the executive arm to pay more attention to the humanitarian crisis caused by insecurity.

As part of a wider arrangement to address the crisis, the Senate said it would organise a conference on North-east humanitarian issue. The date and the composition of the committee are yet to be announced.

These resolutions were made yesterday during plenary, following a motion sponsored by Senator Ali Ndume entitled “The dire state of humanitarian crisis in Nigeria, especially Borno, Adamawa and Yobe (BAY) States.”

Presenting the motion, Ndume painted a gloomy picture of the realities on ground and put the current number of people in need of humanitarian assistance in the North-east at over 7.1 million.

He added that the number of people in need of food stands at 2.7 million, while malnourished children are about 1.1 million.
According to him, not less than $1.2 billion (N420 billion) is required to address the humanitarian crisis.

He said: “The humanitarian crisis caused by Boko Haram and ISWA in the North-east, North-west, farmers-herders clashes in the North-central region and rampant cases of banditry are of concerns.

“Already, more than 7.1 million people need humanitarian assistance in the North-east. The violence continues to disrupt livelihoods and deepening the impact of chronic vulnerabilities such as food insecurity, malnutrition and epidemics in affected communities.”

Lawan said: “The issue of the displaced persons and IDPs mentioned, are a subject of debate. It is a serious issue. We have to come up with very coordinated approach to handle the situation in the IDP camp.

“We get from within and from foreign donors, but there is lack of focus and prudence in the use of those resources. What we need to do is to engage the National Planning Commission because the donor agencies should really declare exactly what is being brought and what the IDPs would have.

“In a situation where the donor agencies use the monies for rent and other things is wrong. I think is not acceptable. The bulk of the funds must be expended on the IDP. The committee on special duties will handle it.” 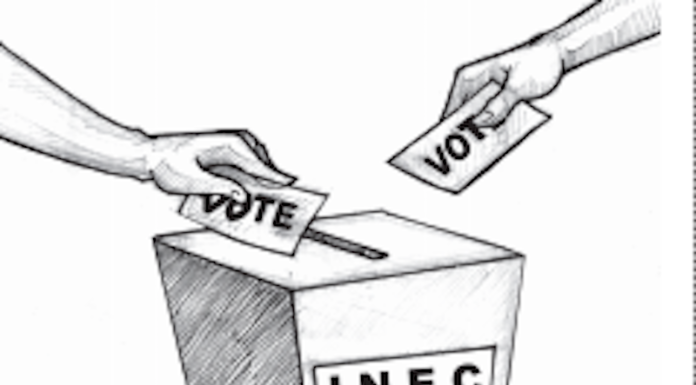