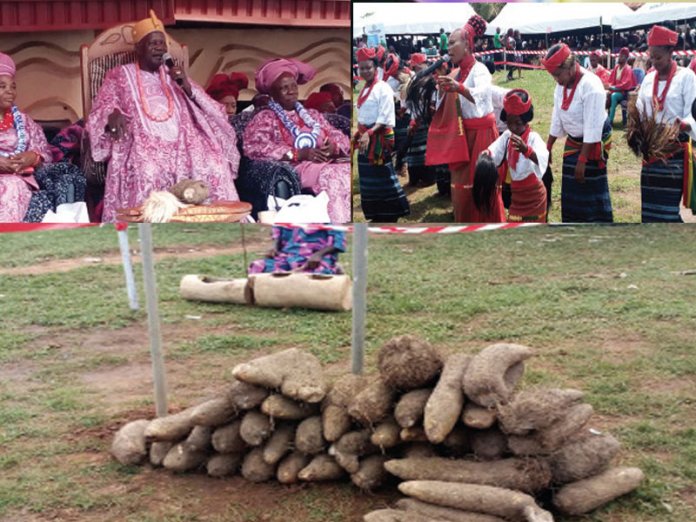 For the Ogidi, Ijumu Local Government Council of Kogi State, June 15, 2019 ushered in the celebration of their Ogidi Day Yam festival. But it wasn’t always like this. Ogidi Day was first celebrated in June 2007, and it has improved over the years, so much as recording astronomical successes and now renowned as one of Nigeria’s biggest event every June.

The event attracted tourists from all walks of lives, including foreigners from the Kingdom of Netherlands. Essentially, this annual festival has attracted infrastructural developments and foreign tourists to the community. These achievements have been attributed to the determination and unity of purpose inherent in the organisers as well as the indigenes of Ogidi land.

In what seems to be a sign of divine approval, the celebration went on smoothly despite the threats of rain which did not fall at all. The conducive weather made the celebrants to feel the frills and thrills of this epoch making occasion.

Indeed, the atmosphere of the venue was charged with the rhythms and melodious musical sounds emanating from the beating of ‘ agidigbo’ drums as the traditional chiefs in their different traditional attires were coming into the hall in procession, and social clubs, cultural troops, hunters paying obeisance and loyalty to the Ologidi of Ogidi, HRH Oba Rabiu Oladimeji Sule who was conducted round, welcoming his guests and being accompanied by traditional dancers.

While this was ongoing, different cultural troops entertained the audience. The Owo cultural dance stood out among the troops that participated in the event. They stole the show with about three sub- groups of dancers who in measured matching steps, moved to the beating of drums and gongs to the extent that all eyes were temporarily glued on them.

Meanwhile, a day to the commencement of the festival, the beauty pageant was held where a new Sisi Asa (Queen of Culture) emerged after series of serious competitions and was publicly crowned and she became Ogidi Cultural Ambassador for year 2019.

In his speech, the National President of Ogidi Development Union (ODU), Mr Kayode Eniolorunda, appreciated God for sustaining the festival over the years, noting that despite challenges that confronted the organisers of the event, they surmounted them. He further pointed out that Ogidi Day has become an institution to reckon with and a symbol of unity for the people.

While appreciating his predecessor, Tunde Ipinmisho over his efforts on the sustenance of the event and the successes recorded yearly, he urged all and sundry to continue to support the event. Eniolorunda reiterated that the Ogidi Day celebration and all it stands for would not be compromised or sacrificed on the altar of clannish or religious interest.

Subsequently, the New Yam festival, which was the kernel of the gathering, was presented publicly to the Ologidi of Ogidi, Oba Rabiu Sule by the Yeye Oba of Ogidi land, Chief (Dr) Nike Okundaye. The presentation thus permitted all the indigenes to eat the new Yam. The reasons for the yearly celebration of this event is to appreciate God for bountiful harvest and thank Him for making slices of yam in form of seedlings become whole tubers.

Also speaking, the immediate past National President of ODU, Tunde Ipinmisho, told the gathering that only God should be praised for the successes recorded so far on the annual event.

He recounted the infrastructural developments sited in the community being parts of aftermaths of Ogidi Day celebration, adding that previous years’ celebrations have been described as great and greater but the 2019 one was the greatest as it played host to three first class Kogi State Kings who are the Obaro of Kabba, HRM Oba Solomon Owoniyi; the Ohimege Koto, HRM Dr Abdulrasaq Isah Koto and the Olujumu of Ijumu, HRM Oba Williams Olusegun Ayeni.

The Ambassador of Netherlands to Nigeria, Ambassador Marion Kappeyne in her goodwill message said it was an honour to be in Ogidi community.

“I want to thank Nike for giving me the honour to be here. Ogidi community certainly has a lot of things to be proud of, in view of what I have seen today in the community. What I am seeing here today is very special. Ogidi people have a very rich culture and they were expressing it and teaching it. Chief Nike has been doing a wonderful job in keeping the culture and giving the culture to younger people to keep it safe.

“The function of culture is the preservation of pride which the Ogidi sons and daughters have really displaced annually. I will take back to my country in Netherlands how things are going here so that many of them can come here to watch your rich and super culture. I hope that many Netherlands national will be able to come and experience this super rich and colourful culture.

“In my country we are learning to use natural resources because we have little of sun, but we have the wind in abundance. So, I am presenting a device to the Chief of Ogidi for wind mill that can be used to move water from a well.”

A journalist who was one of the awardees, and presently Director General Ekiti State Art and Culture, Ambassador Wale Ojo Lanre said this was his third time of attending the festival. According to him, Ogidi in terms of adherence to culture is the most formidable community in the entire state.

He said, “I came here all the way from Ibadan in Oyo State to cerebrate this festival. That shows that the festival meant a lot to me. The way the day is cerebrated is unique and stylish and it was branded the way it can attract a lot of people out of the state.

“Every year, the community talk about how the government can develop the town for them. The Ogidi day is about development, networking and a very simple way to promote brotherhood. The government should encourage this type of festival by rehabilitating the road because the road from Kabba to this community is very bad. This town has showcased itself as one that promotes culture and tourism, encouraging their people and empowering them.

“As a tourism journalist, I used to come here all the way from Ibadan to attend the festival and if they deem it fit to honour me, I will accept it with all gratitude,” he said.

In a goodwill message on behalf of the first class traditional rulers who graced the occasion, HRM, the Ohimege of Koton-karfe, Alh Abdulrasaq Isah-koto noted that the celebration and cultural display are in line with international standards, just as he urged other communities to emulate them. The revered monarch also averred that Ogidi community has all it takes to be a tourist centre.

In his own speech the royal father of the Day, the Ologidi of Ogidi, HRH, Oba Rabiu Sule, whose status has just been elevated to that of a second class chieftaincy holder, expressed his gratitude to the state governor, Governor Yahaya Bello for granting the community’s request in upgrading his stool.

The royal father noted that the festival was not a ritual as some people erroneously believe, but an opportunity to appreciate God’s mercy in making seedlings turn whole yam in a year.

Interestingly, it is heartwarming to put on record that one of the tourists who graced this occasion on the invitation of his friend, Mr. Folabi Ayodele Emmanuel, who is the son of the soil, has convinced this foreign investor friend to invest in wood processing industry in the community.

According to him, he convinced the investor to try the rural setting like Ogidi for investment which he agreed to, noting that the impacts of the investment were already being felt in the community.

He disclosed further that about 120 youths from within and outside Ogidi Land are being gainfully employed in the industrial sawmill. He described the wood industry established by the foreign investor in Ogidi land as the largest in Kogi State, saying no other one can rival it so far.

Asked the worth of the industry in monetary terms, he responded that he could not be certain but it is a multimillion naira project. He urged the youths to be hard working so as to move Ogidi community and the country forward.

He said he was on the same page with the National President of ODU who described the celebration of Ogidi Day as an institution and a symbol of unity, adding that though there are challenges emanating from clannish interests, they were being surmounted.

Another award beneficiary, Prince Oluwole Balogun, described the 2019 celebration as a success and returned all glory to God. He pledged loyalty to the Ologidi, saying that the award conferred on him would translate to better things for the community.

The Ologidi’s remark while conferring the chieftaincy title described Babalola as an” illustrious son and ambassador “of Ogidi community, adding that the entire community was proud of him.

There is no gainsaying the fact that this festival has contributed tremendously to the socio-economic transformation of this community. That is why there is need to continue to improve on it and make it an international tourist centre.