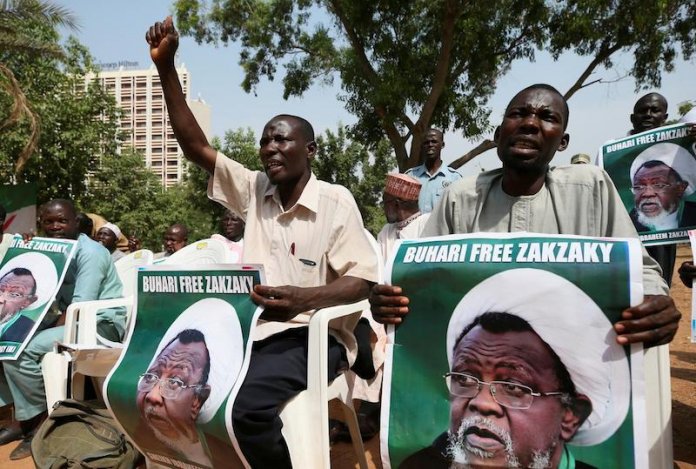 Protesters under the umbrella of Concerned Women and Africa Arise for Change Network, yesterday stormed the National Assembly to protest against the Islamic Movement in Nigeria (IMN) over its failed attempt to take over the legislative arm of government last week.

The Convener of the group, Princess Ajibola, while addressing journalists in Abuja, said that while every Nigerian has the right to protest at the National Assembly, the intention of the IMN was very obvious, saying they were there to sack the parliament as demonstrated by their attack on the policemen on duty.

“Concerned Nigerians Women and the Africa Arise for Change Network are staging this rally today in order to put on the record that we are not in any way part of the conspiracy of silence in the glaring threat now posed to the country by the Islamic Movement in Nigeria (IMN).

“It is laughable that the IMN resorted to playing the victim after their attempt to overthrow the National Assembly failed. While every Nigerian has the right to protest to the National Assembly, the intention of the IMN was very obvious; because they were there to sack the parliament as demonstrated by their attack on the policemen on duty.”

“Our rally today offers a demonstration to such people on how non-violent marches are held. Peaceful protests do not involve protesters menacing other citizens, chanting anti-government slogans and definitely does not involve attempting to forcefully take over government building, neither does it involve killing policemen that are on legitimate duty for the country.

“We, therefore, question the conspiracy of silence by those who think Nigeria deserves to have another terror group when the vestiges of Boko Haram are still being eradicated from their remaining strongholds. We condemn those that have obstinately refused to see nothing wrong with recent attempts by IMN to take over the National Assembly.”

The group called on the National Assembly to pass a resolution, compelling the Office of the Attorney General of the Federation to file a suit for the court to declare the sect a terrorist organisation so that law enforcement agencies can better respond to the threat it poses to the country.

According to her, “we shall keep up this demand until the IMN is designated a terrorist group. We will not stay silent while neo-terrorists destroy our democracy.”