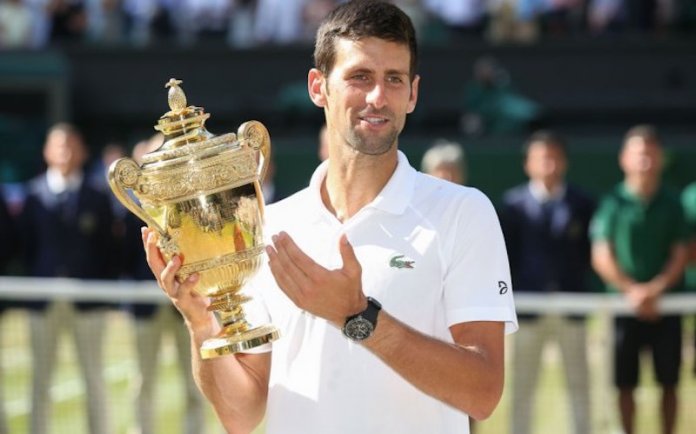 Tennis legend, Boris Becker, has warned tennis fans to “wake up to the greatness” of Novak Djokovic after he won his 16th Grand Slam at Wimbledon at the weekend.

Victory in the longest ever Wimbledon singles final moved him closer to Federer’s men’s record of 20 major triumphs. Rafael Nadal, with 18, separates the pair.

Djokovic struggled to win over a pro-Federer crowd, who clapped some of his misses and jeered him at one point during a tense final set.

“It triggered him to fight in the fifth set,” observed Becker, who coached Djokovic between 2013 and 2016.

“There comes a point when you get frustrated, but I thought he handled himself well and was mentally well prepared.”

Swiss second seed Federer, 37, was aiming for a record-extending ninth men’s singles title at the All England Club, which would have matched Martina Navratilova’s all-time leading tally.

Federer is the darling of the Centre Court crowd and was backed by the majority of the 15,000 fans in what became an increasingly partisan atmosphere.

That was most apparent when Djokovic was booed when he went over to chair umpire Damian Steiner to discuss what he felt was a late Hawk-Eye challenge from Federer.

“Federer is the greatest of all-time here and has the right to get that love, but on the other side you have to respect a four-time champion a little bit more,” said Becker, a three-time winner at SW19.

“I hope next year, if they played again, it would be more even.

“He came into the party that was the Roger and Rafa party and he became the party pooper.

“Now, after 16 majors, people have got to wake up to the greatness of Novak Djokovic.”

Djokovic retained his Wimbledon title by fighting off two championship points before beating Federer with a record four hours 57 minutes on the clock.

And Becker believes the world number one will not rest until he has surpassed Federer and Nadal.

“He should be more than proud to have achieved 16 majors. If you told him that 15 years ago he would have said ‘I don’t believe you’ and he would have taken one or two.”

Djokovic’s triumph means he has now won four of the past five Grand Slam titles and, being almost six years younger than Federer, could add plenty more barring a loss of form or fitness.

His pursuit of Federer and Nadal is made more remarkable by the fact he won his first major in 2008 – when Federer had claimed 13 and Nadal five – and only added a second three years later.

“Honestly I think he can overtake them, but I wouldn’t like to say that for sure,” said Becker. “The race is on.

“This endless talk of who will be the most successful will continue as long as all three of them are playing.

“I don’t see the end of the road for any of the three. I believe all of them will win more Grand Slams.

“Novak’s work ethic is 24/7 and he actually admitted at the end that Federer – still reaching Grand Slam finals at the age of 37 – inspired him.”

“This victory will motivate him to keep putting in the hard work and winning more titles. Federer and Nadal are very much in his sights,” he added.

“He’s a year younger than Nadal and five younger than Federer – we all know he fancies overtaking those two.”

Djokovic’s fifth Wimbledon win, in addition to triumphs in 2011, 2014, 2015 and 2018, saw him move alongside Swedish great Bjorn Borg in terms of Open era victories.

Only Federer (eight) and Pete Sampras (seven) have won more since the sport became open to professional players in 1968.

“I think because of Federer winning eight, it is sometimes lost that Djokovic is one of the greatest grass-court players in history,” Henman said.

“He’s up to five and you wouldn’t put it past him winning more titles in future.”