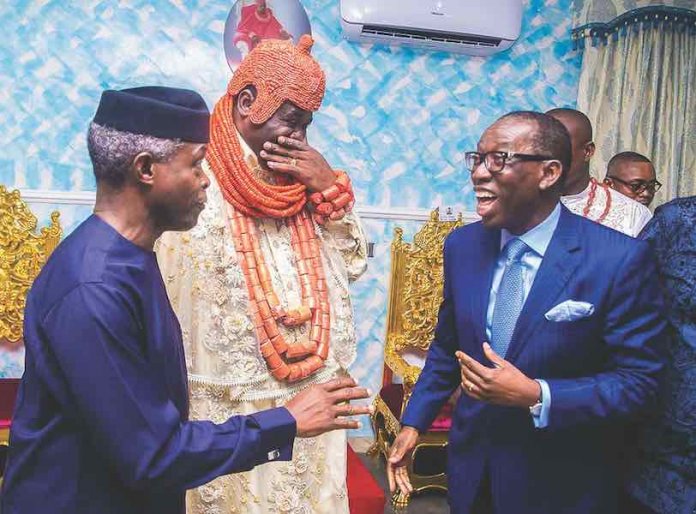 Professor Osinbajo, who was on a one-day working visit to Delta State, was particularly impressed by the invitation extended to him to commission road projects in Okerenkoko and Ogulagha, both riverine communities in the state.
Speaking at the inauguration of the 20.29km Obotobo I,Obotobo II, Sokebulou, Yokiri roads in Ogulagha, Burutu Local Government Area, Osinbajo said, “I want to commend Governor Okowa for his major achievements in a neighbourhood and area that has been neglected, that have not had this type of road.
“We commend him also, on several other initiatives in this Ogulagha Kingdom in particular, because this has been a very peaceful community and it is a host to several of our oil and gas assets.
“So, it really is a special pleasure to commission these roads and also thank His Royal Highness,(Elder, Capt) Joseph Timighan who has maintained the peace in this neighborhood and who has shown true leadership by the way he has conducted the affairs of this area,” he said.
Governor Okowa had expressesed his appreciation to the Vice President for commissioning the roads noting that the invitation extended to him was to show gratitude for his role in ensuring peace in the Niger Delta.
“We are truely happy that we invited you; you are a man of peace and when we tried to consolidate on the peace in this region, you were on hand to help talk to our people. We felt there was no better person to invite at this moment to commission these projects in Okerenkoko than your office,” he said.
Okowa said he was encouraged to embark on the Ogulagha road projects when he was informed by the traditional ruler of the communities that all his people wanted were roads.
He said, “I never knew that there was such a road until the king told me. When I called the king and asked him ‘what can we do for such a peaceful Community,’ he said road. Thank God we have been able to achieve this. We give God the glory.”