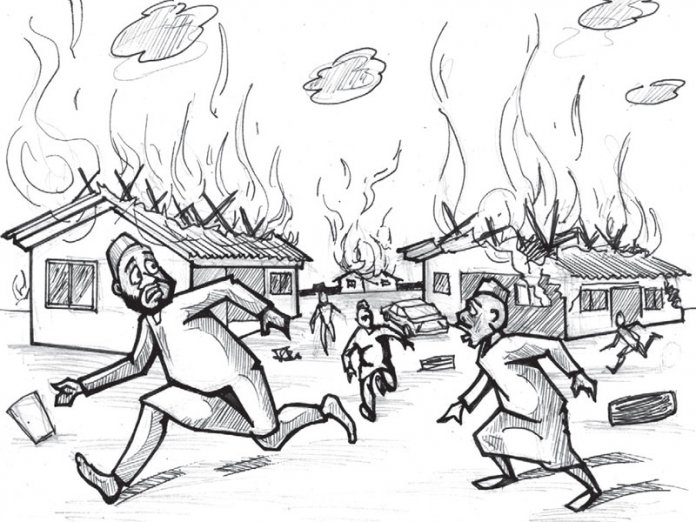 It’s in the nation’s interest to address communal conflicts

Across the country, communal conflicts are becoming more frequent and deadly. Bloody battles for supremacy and for the control of land are becoming alarming. Only recently, some communities on the Mambilla Plateau in Taraba State erupted in an unprecedented violence that claimed the lives of many inhabitants. Last month, about 20 people were killed over land disputes between a community in Cross River State and a neighbouring Ebonyi State community. Governor Samuel Ortom of Benue State revealed not long ago that about 1900 lives were lost to the lingering clashes between farmers and the herdsmen in the state.

Presidential spokesman, Garba Shehu, had hinted last month that President Muhammadu Buhari has begun consultations for an inclusive stakeholders’ committee that will interrogate issues that fuel communal conflicts across the country. The committee, according to him, would be saddled with the responsibility of proffering lasting solutions to age-long disagreements that had claimed lives and property with particular focus on the Tiv/Jukun relations in Benue and Taraba States. Sadly, as is common with this administration, there is nothing to suggest that the committee will be established anytime soon and yet time seems to be running out with different parts of the country engulfed in one communal crisis or another.

This presidential intervention, which appears late in coming since the Tiv/Jukun communal clashes and others broke out again early this year, is however a welcome development that should be supported by all and sundry. At the last count, the clashes had claimed hundreds of lives on both sides. In the recent past, there were interventions by the Eighth National Assembly which last April set up committees at both the Senate and House of Representatives that visited the crisis areas and met with the governors of Taraba and Benue States. Despite the visit and assurances of the two governors to curb the clashes, they persist three months after.

In the wake of the crisis, Governor Darius Ishaku of Taraba State in April gave a marching order to the police to clampdown on the perpetrators especially the sponsors of the clashes. Since then, the police which appeared overwhelmed have not been able to end the crisis. So, in setting up the presidential committee on the communal crisis, we believe all critical stakeholders especially on the recurring Tiv/Jukun crisis must be represented and given a marching order and a time frame to put an end to the clashes that are portraying the country in bad light.

The losses to the economy as a result of the activities of these crises cannot be easily quantified. Aside the thousands of people that have been killed and property that had been razed, several families are today dislocated with countless people physically and psychologically maimed for life. The future ambitions of many Nigerians, particularly children, have been cut short or disrupted while the local economy suffers grievous harm. This is not to talk of foreign investors who are scared by the many violent conflicts in the polity.

More worrying is that many communal conflicts across the nation also highlight the prevalence of weapons in the hands of non-state actors in the country. Nigeria is awash with illegal Small Arms and Light Weapons (SALWs). The ease of access to these weapons has made individuals and communities more fortified and hence less amenable to entreaties to make peace. Many communities are self-arming to protect themselves, to go on the offensive or for reprisal attacks.

The frequency of these incidents demonstrates that we are teetering towards a lawless society, with all the frightening implications for peace and security in our nation. The authorities, at all levels, therefore need to sit up to address these concerns before our nation descends into anarchy.