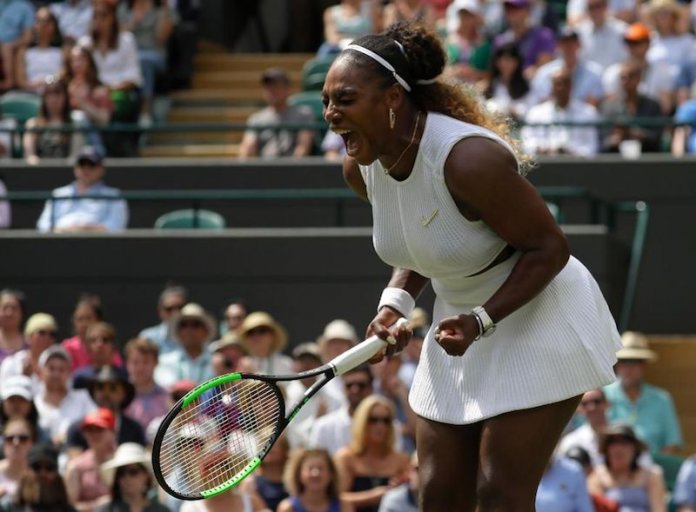 Serena Williams battled past American compatriot Alison Riske despite a sluggish performance to reach the semi-finals at Wimbledon on Tuesday afternoon.

Williams is chasing her eighth Wimbledon title and her first Grand Slam title since January 2017.

“It was really satisfying,” the 37-year-old told the BBC.

“I wouldn’t have won that match a couple of weeks ago.

“I’m glad I was able to come through. She was honestly playing amazing, she beat so many great players.

“I was really pumped, it was for a place in the semis at Wimbledon and that doesn’t happen every day. It’s a long, arduous road.”

World number 10 Williams was broken early in the opening set, and looked despondent with Riske – who beat world number one Ashleigh Barty in the fourth round – not allowing her to settle.

The seven-time Wimbledon champion – who was fined $10,000 (£7,988) on Monday for damaging one of the Wimbledon courts with her racquet – broke back to level the scores at 3-3, but that was only just the beginning.

Riske immediately broke Williams again, only to lose her own serve once more, before Williams went on to break her decisively on her second set point to take the opener 6-4.

The second set, however, proved the polar opposite, staying on serve until Riske broke her opponent to go 5-4 up before serving out to love to seal a set in which Williams made 10 unforced errors.

But, having been broken immediately in the deciding set, Williams responded in perfect fashion, winning three consecutive games, only to lose her serve once again.

Helped by Riske’s five double faults, Williams went a break up at 5-3, before serving out the match in two hours three minutes.