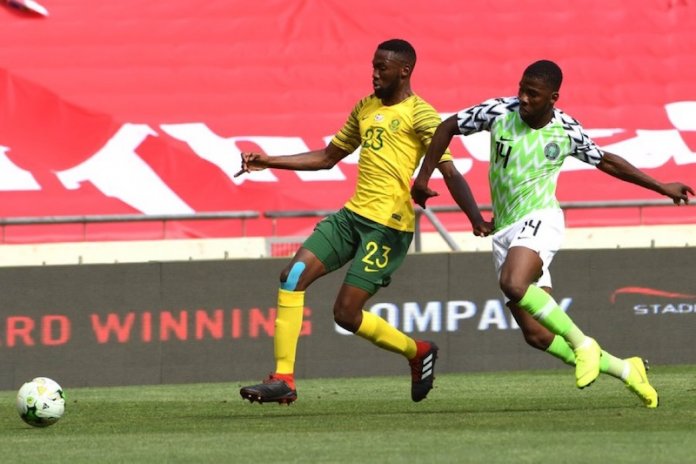 A semi-final spot at the ongoing 2019 Africa Cup of Nations is up for grabs when the Super Eagles of Nigeria take on the Bafana Bafana of South Africa in one of the tournament’s quarter-final games today.

The match between two past winners of the African Cup of Nations, billed for Cairo International Stadium, will be broadcast live at 8pm on SuperSport 7 and 10 on all DStv packages, and SuperSport Select 2 and 4 on GOtv Max and Plus packages.

Both teams have met 13 times, with six Nigerian victories against South Africa’s two, the most recent being the 2 – 0 away victory over the Super Eagles in a 2019 AFCON Group E qualifier played in June 2017. The return leg last November in Johannesburg ended 1 – 1.

Coach Gernot Rohr will once again look to Odion Ighalo for inspiration, with the China-based striker seeming to have rediscovered his scoring touch. The Super Eagles coach will also hope that his side’s defence, which has proved a source of worry, will enjoy better protection by hard-working midfielders, Wilfred Ndidi and Oghenekaro Etebo. The Super Eagles can also count on midfielders Alex Iwobi and defender Ola Aina to provide attacking spark.

The Bafana Bafana look very capable of ending the Super Eagles’ dream of adding to their three AFCON victories. The 1996 winners will take inspiration from the staggering counter-attacking performance against Egypt and their main offensive weapons, Percy Tau and Thembinkosi Lorch, the 2018/2019 ABSA Premiership Best Player. Both players showed how much menace they are capable of against the Pharaohs of Egypt.

Coach Stuart Baxter can also depend on Lebo Mothiba, who has been a source of irritation to defenders since the tournament began, the creativity of Bongani Zungu and the reliability of Dean Furman in midfield.