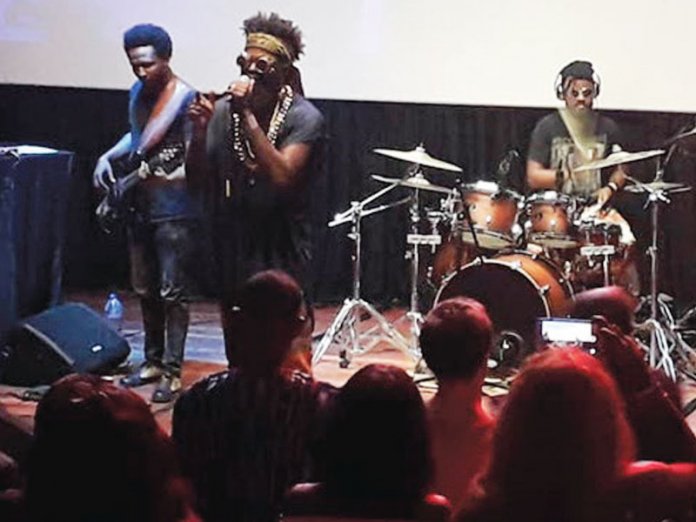 Welcome to the future. It is the year 3019 and Skata Vibration, an afrofuturist psychedelic rock band is performing to a motley audience at the new Alliance Française Cultural Centre in Ikoyi. The hall is full, brimming with lovers of new alternative sounds that is rooted in African culture. Some sat on chairs, others on the red carpeted floor. Some stood in the doorway, others on the carpeted steps of the cinema hall. The hall is vibrating with electric guitar and percussion sounds  and the audience is intoxicated by the musical ecstasy curated by the band. It is hard to keep still. They tapped their feet, clapped their hands, nod their heads, whistled and screamed for more, even if they had little understanding of the lyrics sung in Hausa.

That is the scenario the band’s vocalist Stiques created when he joined other members, Jad, Adey and Laughter on the dimly lit stage. Only that the year is 2019, not 3019. It is the World Music Day and Skata Vibration was one of the artistes performing in the celebration to mark the significant day organised by the French Embassy.

As their name suggests, the band is really a seductive enigma. Blending the legendary Afrobeat sounds with funky rock, the band in  their over an hour set, took the audience on an adventurous musical journey, only pausing to introduce the next song with commentaries on everyday issues in the country, and of course bring them back to the present day.

Before the energetic Stiques came on stage to lit it up, Jad, the guitarist entertained with melodic sounds from his electric guitar backed by Adeh the percussionist,  and Laughter, the drummer who also played the guitar as well.

Stiques whose tenor is rich in texture was the light of the party. He portrayed the future of an afro-rock singer who is not dressed in the conventional leather jacket or ripped jeans peculiar to rock artistes. Rather, he chose a black tunic and trousers, accentuated by the beads of necklaces on his neck, his funky eyeglasses, dangling earrings on his ears, bracelets on his wrists and a long print scarf wrapped around his afro spiky hair. His full bearded face gave him a youthful appeal.

But that is not all to the vocalist. His bravura on stage is impressive, although that is the trademark of the underground band that has been performing for over seven years. They released their first  album ‘Wuta’ last year that featured collaborations from friends that have contributed to their growth.

For the night, songs like ‘Jindadi’, ‘The Light Song’, and ‘Wuta’ from the album were performed, both songs were commentaries on the political corruption that has ravaged the country, especially the average Nigerian youth. For instance, during his performance of ‘The Light Song’,  Stiques pleaded the indulgence of the audience to put their mobile phone flashlights on as the song is about light. Wuta means fire or light in Hausa. The song touched on the negative imagery of Africa as the dark planet such as corruption, natural disasters and crime prevalent in most African countries.

But in the future, Stiques, singing in melodious Hausa language sees a future where there is no white light but colours. It is also a future where he is not afraid to air his views in public. He boldly told the audience that he refused to be ruled by an illiterate, taking a swipe at the present ruler of the nation, while making a  startling comment that the north will never give up on power. You may wonder how he came to such a conclusion but Stiques who is from the north, knows exactly how his people operates.

He didn’t stop there. He went on to advise the audience not to give alms to Hausa children begging alms in public.

“It is business for their families back home (north); rather tell them to go to school and stop begging.”

This show of gallantry is what has endeared the band to many. The audience apparently  came for the sounds and the truth. And Skata Vibration is not tight-lipped about the truth. Which was why when they performed  ‘The Edge’, a song about the environmental hazards faced in the coastal city of Lagos despite its architectural opulence in the highbrow areas,  the audience easily concurred. For the last song of the night, the band performed a song ‘Headless Chicken’, another jab at the economic and political plight of the country.

Perhaps, the most perfect picture the band painted for the future is the  modified Zanku dance. In the future, the popular Zanku dance will not be limited to the rhythmic movement of the legs and elbows, it will include being shirtless as demonstrated by Stiques, and will involve some clapping.

In case you are still doubting if the band’s future plans will see the light of day, Stiques will not hesitate to remind you that the future is not for close-minded people, but for people who are open to positive change.