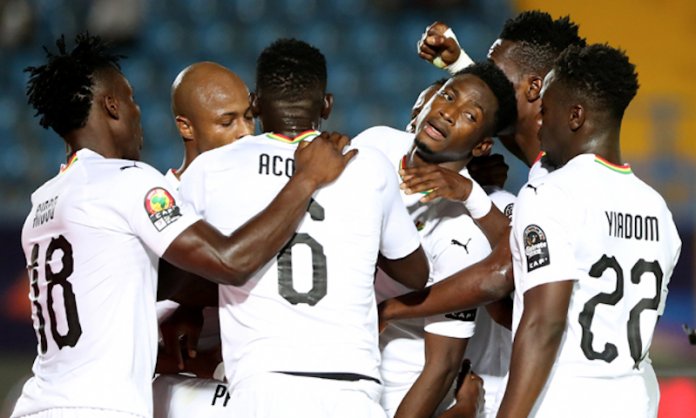 Ghana reached the last 16 of the Africa Cup of Nations and knocked out Guinea-Bissau with a 2-0 win in Suez.

Jordan Ayew raced on to a through ball seconds after half-time to put them ahead, and Thomas Partey slotted home Abdul Baba’s cross to seal the victory.

Guinea Bissau, who could have gone through with a victory, hit the woodwork three times.

Piqueti had a 25-yard shot tipped onto the bar by keeper Richard Ofori, Joseph Mendes hit the outside of the post from the edge of the box and Mamadu Cande’s corner struck the crossbar.

Swansea striker Ayew also hit the post twice, once in each half.

As a result of winning the group on goal difference, four-time champions Ghana, who had drawn their opening two games, will face the team who finish second in Group E – Mali, Tunisia, Angola or Mauritania – in Ismailia on Monday.

Meanwhile, Ghana and Newcastle United winger Christian Atsu has been ruled out of the rest of the Africa Cup of Nations with a hamstring injury.

Atsu was forced off just 15 minutes into the Black Stars’ goalless draw with Group F rivals Cameroon on Saturday.

The 27-year-old has returned to England for further treatment with the Tyneside club.