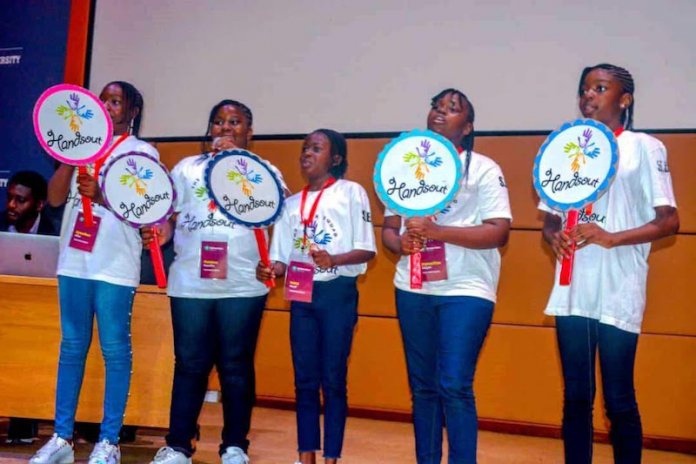 Girls are bent on ruling the world of technology in Nigeria. A group of young girls aged 10 -11 years from Standard Bearers School (SBS) Lekki, Lagos, have won the zonal pitch in the same category of the Technovation challenge held at the prestigious Lagos Business School (LBS) which qualifies them for the semi-final round.

The BrainSquad team made of Ivana Mordi, Munachi Chigbo, Jadesola Kassim, Ayomikun Ariyo and Pandora Onyedire, after research, came up with an idea of building a fund-raising app called ‘Handsout’ to help less privileged children go to school and get a good education.

Their studies showed that over 10 million children drop out of school in Nigeria, primarily for the lack of funds. What then triggered the creation of ‘Handsout’was the widely reported building collapse that affected a school at Itafaji, Lagos Island as well as the viral news of Success Adegho, a young girl who was sent out of school because her parents could not pay her school fees.

The BrainSquad are currently waiting for the final selection of teams in Africa as the judges in Silicon Valley decide which teams will go on to represent the continent at the finals later this year. In the meantime, they are working on improving on their app following their judges’ advice, to ﬁnalise its launch.

BrainSquad team leaders, Munachi Chigbo and Jadesola Kassimare of the view that the app will enable organisations and well-meaning individuals to donate funds and study materials for many indigent school children.

The Proprietress, SBS, Mrs. Modupe Adeyinka-Oni expressed her joy at witnessing the milestone reached by the all-girls group in appropriating technology to solve a global problem.

“The children have shown that they can stand shoulder to shoulder with their peers worldwide and tackle global problems heads on. It is an integral trait for developing the leaders of tomorrow which we lay emphasis on at SBS. The Nigerian 2018 winners in the Junior category called Team ‘Save-A-Soul” developed a mobile application called ‘FD Detector’ to tackle the problem of fake drugs in the country.

“The FD Detector team was selected from over 2,000 mobile app developers to represent Africa at the world pitch and God willing, we see Brainsquad doing the same,” she said.

She further revealed that ‘BrainSquad’ is partnering Stanbic IBTC Bank Trustees to open a trust to handle all cash donations and are looking to partner with organisations and foundations to select the recipients as well as logistic companies to assist with transportation of any non-cash donations to designated communities.

Handsout will serve as a hub for children by children where donors’ funds can be directed to the children who need it, using charities like International Women’s Society (IWS) and Slum2School. Credible NGOs who work directly with children and orphanages around Nigeria are expected to apply on behalf of the children so people who need the funds are reached.

“It is estimated that if only 100,000 people donate a minimum of N1,000 every month, they will get a great deal of children off the streets and back in schools.”

The plan is to support children in primary and secondary schools across Nigeria and have capped the maximum scholarship at N50,000 per term. This could be less, depending on the average fees obtainable in each region.

The Technovation Challenge, sponsored by Microsoft encourages girls to develop an app that will solve real world global problems through technology. From there, they canbecome Tech Entrepreneurs and leaders.

In 2018, nearly 20,000 girls across the globe participated in building apps and starting businesses that solved pressing problems in their communities such as gender violence, autism, speech disabilities and gender inequality. The BrainSquad app, irrespective of the final outcomes of the judges will be launched in Nigeria.