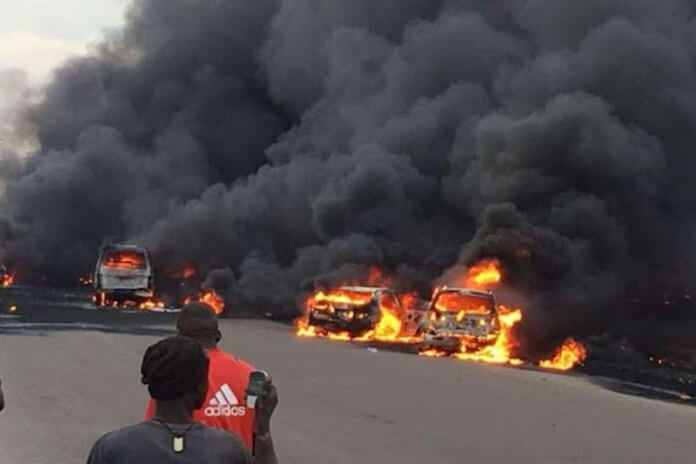 An eyewitness, who identified himself as Austin, said the tanker was carrying fuel from the eastern part of the country, heading to Makurdi when it fell after a failed bid to dodge a pot hole.

He explained that the villagers went to scoop fuel when the tanker exploded, and caught fire, killing over 64 persons and injuring several others.

According to him, “his petrol tanker was loaded with fuel and travelling along the road but had a mishap close to Ahumbe village in Gwer East Local Government Area. So, the people went to the scene of the incident to scoop fuel.

“In the process of evacuating the fuel, they were hitting the mental tanker with another iron so as to have enough space to drain the fuel more freely. Then suddenly the tanker caught fire and exploded, killing the people”.

“Another vehicle – a bus with about 14 passengers ran into the spot and the entire passengers on board were all consumed by the explosion. All the passengers in the bus also got burnt,” Austin stated.

The Benue State Sector Commandant of the Federal Road Safety Corps , Baba Aliyu confirmed the incident, saying that they have so far recovered over 10 dead bodies, while over 50 injured persons have been evacuated and taken to various hospitals in Aliade, the headquarters of Gwer East.

“We are yet to ascertain the number of people that have died. Until we are able to put out the fire and conduct proper search before we will be able to know the actual figures of people that died. As am talking to you now, the fire and smoke are still coming out from the nuzzle of the tanker.

“The explosion burnt down all the shops that the fuel split on”.

Also, the Information Officer, Gwer East Local Government Council, Mr. Christopher Avi, said over 50 persons were burnt to death while over 70 sustained severe injuries in a tanker explosion at Ahumbe.

He explained that the victims were burnt to death while over 70 persons were rushed to four different hospitals for treatment.