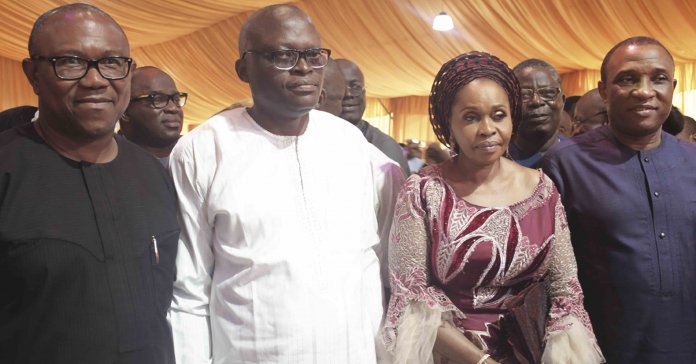 It was torrents of tributes as Nigerians from all walks of life, including former ministers, former governors, politicians, publishers, families and friends gathered in Lagos yesterday for the outing service for Mrs. Helen Olufunke Eniola-Olaitan, the late wife of the Managing Director of THISDAY Newspapers, Mr. Eniola Bello, to bid her final farewell.

The service commenced with a rendition by the choir of Realm of Glory Church and was preceded by the first Bible reading by Blossom Bello Odofin.

Wife of the General Overseer of Realm of Glory Church, Rev. Grace Aiyedogbon took the special song titled, ‘It is Well,’ followed by the second Bible reading by Air Commodore, Tunde Daramola (rtd.).

In his tribute, Ven. Paul Femi described Eniola-Olaitan as very generous, down to earth, a prayer warrior and preacher.

According to him, “Helen was an encourager, honest in her dealing. She was always smiling at all time. She was a true mother indeed, even until death, caring for her family and anybody that came around her knew she was a true mother. She was very dedicated to the things of God. In summary, her elder sister asked me to say this, ‘we shall meet at the bosom of Christ; we shall forever be with Him again,’ thank you.”

On her part, the sister-in-law of the deceased, Mrs. Nkechi Bello Odofin, said Eniola-Olaitan was loving and caring, adding that it was impossible to sum up her beautiful life in a few words.

She said: “There are many beautiful things that I want to say about her, but how can I be able to talk about such a wonderful person in just a few minutes. How can I explain the kindness in her heart, the contagiousness of her joy or depth of her loving? How can I ever be able to sum up her beautiful life in a few words? I will never forget the first day her husband brought her home to introduce to me. She was so beautiful; I could not help but fall in love with her. Instantly we bonded.”

Her cousin, Mrs. Yemi Omofe, said she sowed her life as a seed for the rest of her family.

“Your brief and meaningful life thought me so many things as an adult; and as children growing up, I learnt a lot from you. Your love and the sense of value you gave to everyone can never be forgotten,” she said.

In the same vein, her closest friend, Mrs. Hanna Oladunni, said a day was not enough to talk about who the deceased truly was, describing her as an embodiment of what a true friend is.

In his sermon, the General Overseer of Realm of Glory International Church, Abraham Sam Aiyedogbon, said the gathering was a celebration of life.

He stated that planning and writings notwithstanding, Helen, like John the Baptist, was a burning and shining light.

Aiyedogbon, who likened Helen to Dorcas in the Bible, stated: “The world is filled with darkness, but from what we have heard from the people who had the privilege of interacting with her, we can see that there are burning and shining lights in the darkness of the world. I went through the scripture and was trying to look for the woman who will capture what sister Helen represented.

“And the person I could find is found in Acts 9:36, popularly known as Dorcas. The meaning of her Greek name is a deer, which is an emblem of love. So she represented a great lover, not just a lover of people, but a lover of God. As I read that scripture, I saw the life of our late sister there, “he said.

To honour her memory, the General Overseer called on everyone to bring back the values she lived for and imbibe her virtues.

He added that for her not to be forgotten, her good works and everything she represented must be brought back to action.