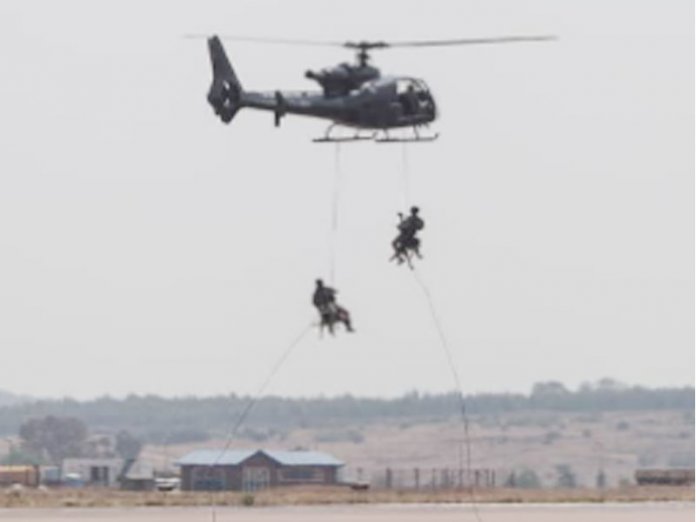 The training is held under the supervision of experts at Paramount K9 Solutions, one of Africa’s leading K9 training academies and subsidiary of Paramount Group, the Africa-based global aerospace and defence company.

The trainers noted that the special operations training will be rigorous, and will cover tracking, rappelling, waterman-ship and other special terrain exercises, meant to equip operatives with the skills necessary to execute a variety of missions alongside the NAF Special Forces (SF).

Through these exercises,K-9 Units will also become critical components of SF Combat Search and Rescue (CSAR), where their skills would be used to rescue downed aircrew in conflict zones and other high-risk environments.

The special operations dogs are trained for maximum versatility, and will also likely be deployed to support the search and rescue efforts of emergency responders in disaster-relief situations in the West Africa region.

Senior Vice President of Paramount Group, Eric Ichikowitz, stated thus , “We are very pleased to see the NAF making great strides to become one of Africa’s elite combat forces. It is a privilege to be a partner of the NAF and we commend their leadership for bolstering the capabilities of the special operations forces and for mitigating hostile risks to critical assets.

The training is expected to augment the skill-sets of NAF personnel, as well as develop the experience necessary for personnel to serve as instructors in their own right. Accordingly, some of the attending NAF operatives will deploy as instructors at the Air Police Training Centre (APTC) located in Kerang, Plateau State, Nigeria. The APTC is strategically positioned in order to enhance logistics coordination regarding NAF’s ongoing CSAR activities and training with the 205 CSAR Group, which is based in Kerang.”

He added, “In 2016, Air Marshall Sadique Abubakar, the incumbent Chief of Nigeria’s Air Staff, pioneered the establishment of the original NAF K-9 Unit, which has grown steadily over the last four years. Ongoing developments and enhancements in K-9 Unit special operations training is the direct result of Air Marshall Sadique Abubakar’s tireless efforts, which we applaud”.

A large number of professionally trained dogs have been deployed throughout major Nigerian airports, NAF Units and in theaters of operation across the country.