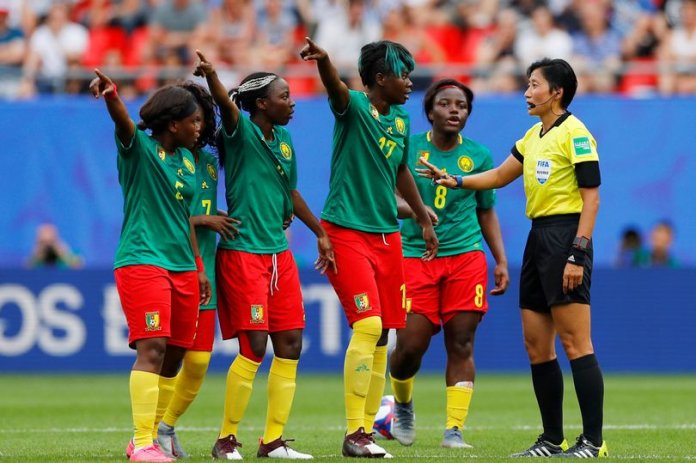 Cameroon, Africa’s last team standing at the ongoing FIFA Women’s World Cup in France succumbed to the superior fire power of England yesterday afternoon, conceding three un-replied goals to end their campaign at the Round of 16

The Central Africans were however enraged by two VAR decisions that appeared not fair to them.

With the victory, the English ladies have now progressed to the quarter-finals.

Goals from Steph Houghton, Ellen White and Alex Greenwood sent England through to face Norway on Thursday, but the fractious game will be remembered for Cameroon’s extraordinary reactions to White’s goal and a disallowed effort from Ajara Nchout.

The distraught Cameroon players twice appeared unwilling to restart the match, gathering in a huddle after White’s strike was given and remonstrating with the officials further after half-time.

Captain Houghton struck England’s opener after an early back pass gave England an indirect free-kick, before the drama escalated.

Striker White placed in England’s second, which was initially ruled out before the video assistant referee deemed White to have been onside, but Cameroon reacted furiously and gestured to suggest the big screen’s replays had indicated differently.

The African side thought they had pulled a goal back after the break through Nchout, but their despair increased when it was disallowed after a VAR review for an extremely tight offside call.

England left-back Greenwood then swept in the Lionesses’ third to secure a win that saw them reach at least the last eight of the competition for a fifth time, and for the fourth consecutive World Cup.