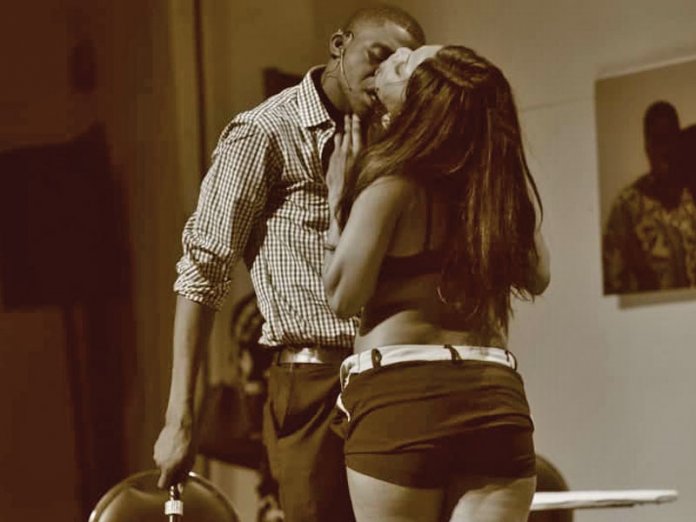 Dayo Doherty’s (Patrick Diabuah) marriage is in trouble. He arrives from work one evening to find his wife, Chioma (Uzor Ozimkpa) in a very suggestive lingerie and panty-hose. Out of sheer curiosity, he checks her email and discovers that she has been chatting with a stranger on a very intimate subject. As a matter of fact, she shares her sexual desires and preferences with this stranger whom she calls master. Dayo was enraged. That was the conflict of the drama in 3Some Play, a theatrical piece that broke the box office record for the season at the MUSON Centre, Onikan.
Produced by Joseph Edgar, alongside two co-producers namely, Olisa Adibua, and Foluke Edgar, the play was first performed at the Lagos Theatre Festival 2018 to a rave review. It came as no surprise that the consummate investment banker, Edgar would bring this show to a proper theatre space away from the amphitheatre at Freedom Park, Lagos where it was initially performed. Although Duke of Somolu Productions is known for historical drama, Edgar decided to take a calculated risk with this contemporary steamy drama.
The plot remains the same: a young man allows his mother-in-law to move into his apartment while his wife moves out to be with her newly found lover. The mother-in-law, Asmau (Frances Bickersteth) is a divorcee yet very sexually experienced. She is quick to detect that the marital feud between her daughter and her son-in-law may have been sexual incompatibility. She decides to wade in, offering suggestions to Dayo on how to please a woman in bed. This scene was graphically portrayed on stage using a female character in sheer body suit, moaning and dancing centre-stage, arousing wild imaginations.
3some raises very controversial subjects about sex and marriage; infidelity, sexual gratification, the role communication in marriage and separation. For instance, it is still very debatable that the preference for BDSM is not a psychological disorder. Of course, it is argued that when it is consensual, it is not to be regarded as a sexual disorder. In the dialogue, Chioma also makes reference to “golden showers”. This practice is unpopular and should be carefully discussed in marriage if and when a marriage mate has unusual sexual preference.
The conflict becomes double-layered in the drama when Asmau and Dayo forget moral principles, share a kiss and the forbidden fruit. The upper chamber of the stage which has a white foil at the bedroom window in place of blinds is well appropriated to give the audience a good view of the bedroom action. Call it a very artistic interpretation, the copulation scene is visually depicted by two silhouettes of the unlikely lovers, humping away.
A love and hate relationship existed between the audience and the plot. On the one hand, a lot of young married women in the audience were hurling verbal abuses at the character of the mother-in-law when she developed from being a concerned mother trying to save her daughter’s marriage to an intruder in the marriage. Most of the men in the audience were thrilled to see Dayo as an expressive and dominant lover who tells his returnee wife, “Strip B**ch”.
Perhaps, the strongest part of the production is the mise-en-scène, that is the sound design, set design, lighting, costume and make-up. For Marvellous, who played the strip dancer role, her identity was protected with the skin painting. The overall sound system was also modulated to be audible but not deafening.
Written and directed by Jude Idada, the production gulped above the initial budget of N8m for technical reasons. One of them is the use of premium cast. All the actors were paid above the average because of the demanding nature of their roles in this psycho-erotic drama. A reliable source revealed that the only male character in the play got the highest pay while all the women who had to strip got a little less than he did. It’s an indicator of the need for female performers to get good talent managers, who can do better on the negotiation table.
Some proceeds from the play was donated to charity. The Executive Producer, Edgar observed that the box office success story of 3some came from support from the corporate organisations including Pay Attitude. That is why the play is returning to the theatre in April 2020.