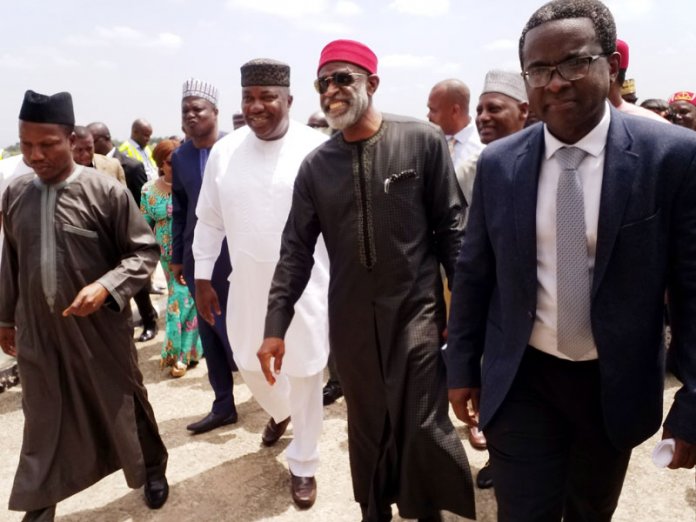 The Federal Airports Authority of Nigeria (FAAN) has expressed its “profound appreciation and gratitude” to Governor Ifeanyi Ugwuanyi of Enugu State for fulfillinåg his promise to address the identified challenges that hitherto posed a threat to the safety of air travelers at the Akanu Ibiam International Airport, Enugu.

Speaking during the inspection of the airport and its environs to ascertain the level of compliance by the Enugu State Government and other relevant institutions to the request made by FAAN, the Managing Director, Capt. Hamisu Rabiu Yadudu, told Gov. Ugwuanyi, who was present at the exercise, that they were satisfied with the interventions made so far by his administration, such as the relocation of the Orie Emene market, abattoir, and the dismantling of the Enugu State Broadcasting Service (ESBS) Radio/TV Mast, which the Managing Director, Mr. Chukwuma Ogbonna, promised during the inspection, will be completed in the next one month.

Capt. Yadudu disclosed that the issue of relocating the ENPOWER Free Trade Zone, adjacent to the runway of the airport, has been resolved with the management of the establishment, which was confirmed by its Chief Executive Officer (CEO), Engr. Emeka Eneh, during the inspection.

He said that after a negotiation by both parties “the required land that FAAN wants to protect is secured” for safety and security, adding: “We are happy with that and ENPOWER Free Trade Zone are also happy that with the remaining land, they can still go ahead with their initiative and develop the land”.

On the airport runway, the MD further disclosed that the engineering team of FAAN and its consultant from the Federal Ministry of Aviation will “very soon commence a comprehensive exercise to make sure that our passengers are safe”.

The FAAN boss, who maintained that “the entire matter has been resolved”, added that the federal government’s agency was working with two solution providers to solve the issue of water scarcity, and equally fence the airport.

Capt. Yadudu while seeking further timely intervention of Gov. Ugwuanyi, frowned at those living “on the air field” near the airport and requested the governor to take prompt action on the matter as usual, stressing that “the issue of illegal residents is very much of safety concern and risky”.

Responding, Ugwuanyi who assured FAAN of the prompt intervention of the state government, noted that his administration was fully committed to the safety of lives and property as well as the progress of the Enugu international airport.

The governor added that he had to shelve other official engagements to be with the management of FAAN to ensure that all issues affecting the safety of the airport were resolved expeditiously.