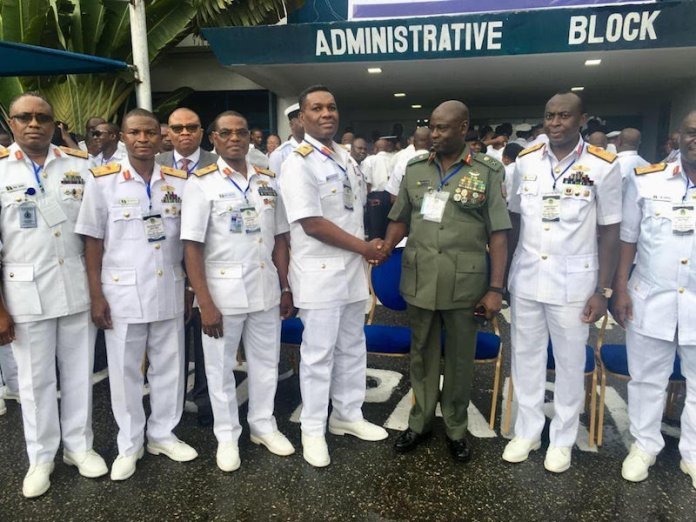 To ensure that professionalism and operational efficiency are sustained for effective discharge of its responsibilities, the Nigerian Navy (NN) recently held its second Warrant Officers Convention at the conference room of the Nigerian Navy Ship (NNS) Quorra auditorium, Apapa, Lagos.

For the navy, engaging the Warrant Officers cadre is vital because they play a pivotal role being the bridge between the higher echelon (the officer cadre) and lower cadre (ratings). Given that they are the backbone of the navy, as they make up the technical foundation of the navy, the convention was themed “ Responsive Warrant Officers’ leadership and Operational Efficiency in the Nigerian Navy”.

In the navy’s divisional system, junior ratings are expected to refer their problems first, to Warrant officers, otherwise called Senior Rates, in their divisions. Also, the discipline, efficiency and morale of the service depends in great measure, on the manner in which senior rates carry out their duties because since they live and work much closer to junior ratings than officers do, they are therefore, in a much better position to understand and appreciate their problems.

It was against this backdrop that the Chief of the Naval Staff (CNS), Vice Admiral Ibok-Ete Ibas, at the two- day convention, explained that the feedback from the implementation of its maiden edition three years ago, spurred him to sustain its hosting, as it gave rise to interesting and far reaching recommendations that were being implemented at various levels of the Nigerian Navy.

He noted that successes achieved by the navy in crude oil theft, illegal bunkering, smuggling, militancy, pipeline vandalism, as well as its support to other services in the ongoing counter-insurgency operations, especially in the North-east, would not have been possible without the role of Warrant Officers.

Represented by the Chief of Policy and Plans, Rear Admiral Beegroy Ibe- Enwo, the CNS said the convention was aimed at exposing the concerned personnel to the need to willingly and effectively discharge their responsibilities at all times.

He said: “Over the years, the Nigerian Navy has developed into a potent force capable of effectively carrying out its constitutional and statutory roles. The service has imbibed the realities of our national imperatives and has applied the most optimal policies and strategies in the protection of the nation’s territorial integrity. The Nigerian Navy has equally tackled the maritime challenges in our Exclusive Economic Zone up to the Gulf of Guinea.

“To this end, the Navy has every reason to be proud as our collective efforts have sufficiently reduced illegalities such as; crude oil theft, illegal bunkering, piracy, kidnapping, smuggling, militancy and pipeline vandalism in our maritime domain. It is equally gratifying that we have continued to give a very good account of ourselves in support of the other services in the ongoing counterinsurgency operations, especially in the North-east. These success as would not have been possible without and enlightened and professional human resource. The Warrant Officers cadre, play a pivotal role to these successes and we are here to give more impetus to their output.

“The need to collectively strive years build a credible navy capable of discharging its constitutional roles and assigned tasks in a sustainable, efficient and effective manner calls for continuous enlightenment and deliberate re-awakening of the tenets of professionalism and excellent work ethics among the naval personnel at all levels. This expectation is what the convention hopes to achieve as Warrant Officers are expected to be experienced, visible and professionally sound.

“Thus, they are well positioned to instill discipline within the lower chain of command. It is also worthy of mention that Warrant Officers are an important link between the office’s corps and the junior ratings cadre. Hence, it is imperative to emphasise that then operational and administrative goals of the Nigerian Navy cannot be attained without a wells disciplined, knowledgeable and highly resourceful class of Warrant Officers.

“No doubt, Warrant Officers are key players in the lower level of the Nigerian Navy command structure and custodians of unit regimentation. It is expected that they would willingly and effectively discharge their responsibilities at all times if professionalism and operational efficiency are to be sustained in the service.”

Also in his remark, the Chairman, Planning and Organising Committee, Commodore K.O Egbuchulam, explained that the idea of organising the convention was conceived after a careful thought of the vital roles Warrant Officers play in ensuring a professional and effective military.

He said, “The convention was conceived to awaken the consciousness of this cadre of officers to the pivotal role they play in nurturing and building new entrants towards achieving their career dreams. It was also to re-invigorate and enlighten this category of managers on their roles and responsibilities in achieving the objectives and aspirations of the Nigerian Navy in line with the CNS strategic directives”.

The need for motivation of this workforce in the Navy formed part of the discuss at the convention in a paper delivered by Rear Admiral Akinsola Johnson (Rtd), in his paper titled Motivation: An Essential Tool for Enhanced Operational Effectiveness of Warrant officers.

He noted that when the motivation was on the increase, it would enhance operational effectiveness and vice versa. To achieve this in the Warrant Officers cadre, he said it required a mechanism to measure the effectiveness and performance of all warrant officers in the discharge of their responsibilities and an assemblage of senior naval officers who were “achievers” to superintend over all warrant officers.

As a retired senior naval personnel, the resource person said the navy had emplaced a motivational scheme of the Warrant Officers cadre in particular other categories of officers in general.

He said, ” The Nigerian Navy Medical Services provide primary, secondary and tertiary health care schemes for NN personnel and their families around the country. In extreme cases and based on the recommendation of a medical board, the NN sometimes undertakes medical evacuation of her personnel abroad. Also, the desire and the on-going effort to provide more accommodation to personnel around the country is a welcome development.

“Since training is a very essential factor in building personnel confidence in the performance of their duties, I am aware that the navy has been very concerned about re-positioning its personnel professionally. There are many more welfare packages that the NN has embarked upon in the recent past.

” You may think the NN is not doing much to motivate you as a warrant officer but the truth is that the NN may not be able to do much considering the fragile state of the nation’s economy. The situation of funding in NN is predominantly tied to the Federal Government sources like the annual budget. All areas of motivation depend largely on adequate funding of the NN. But adequate funding is beyond the office of the CNS.”

Aside motivation as key tool for an efficient senior rate and other personnel, health, was also considered a major enhancer to operational effectiveness.

In another paper titled ‘Health is wealth: An Appraisal of Life in active Service and Retirement’ , life style, environment, genes or inherited traits were highlighted as factors that could affect quality performance of Warrant Officers cadre and other personnel at all levels.

Surprisingly, the paper revealed that variety of research showed that military service was related to the use of tobacco and alcohol products. It also noted that energy drinks have strong appeal to military personnel.

Unfortunately, the long term effects of over consumption includes mental health problems, aggressive behaviours and fatigue, which may hinder operational effectiveness. Also, the short term effects of over consumption of alcoholic drinks as pointed out in the paper, included increased blood pressure, panic attack, palpitation, anxiety, heart problem, dehydration and insomnia, according to the paper.

As important as the the role of Warrant Officers cadre may seem, they were reminded to take the issue of their health serious, so as to age gracefully and enjoy their retirement life.

Another papper on ‘Functional Divisional System and Professionalism in the NN: The Role of Warrant Officers, defined the divisional system as the basic system management employed by the navy for the supervision, discipline, training and advancement of end, as well as an organisation for their well being.

Warrant officers were reminded of the importance of their roles and the need to executive them diligently, considering that more ratings were being recruited into the service and therefore, required more painstaking personnel management.

Although the 2019 Warrant Officers Convention may have come and gone, the lessons learnt are inherent.