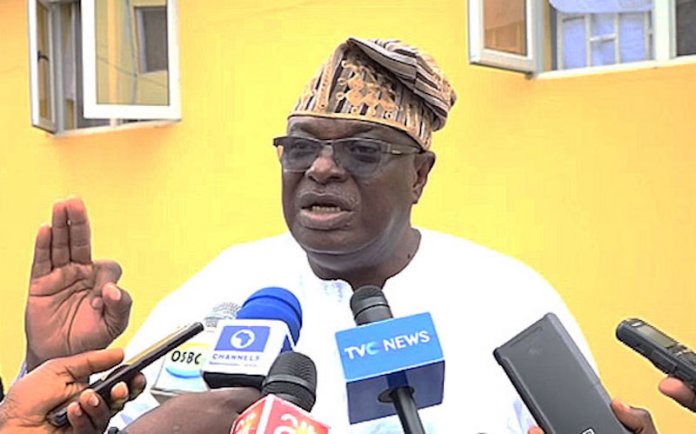 •Insists it was not used for 2019 general election

The Independent National Electoral Commission (INEC) yesterday insisted that the results of the 2019 general election were not transmitted electronically to its server, stressing that the commission only experimented with the technology during some staggered elections held in 2018.

The commission said that the clarification was necessary because of rising controversy on the transmission of 2019 presidential election results from states to the INEC server.

Speaking during the post-election retreat organised by the commission for its staff and ad hoc staff engaged for the last general elections in Osun State, INEC National Commissioner, Mr. Solomon Soyebi, explained that many factors forced the commission to drop the idea of electronic transmission of the results to a central server.

Soyebi added that INEC experimented with electronic transmission of results during Anambra, Sokoto and Osun States’ elections held before 2019 elections but the commission did not sustain the use of the technology during the 2019 general election.

He maintained that the late release of INEC’s budget for the 2019 elections and controversy over the Electoral Act, among other reasons, forced the commission to jettison the idea of using the technology to transmit results to the central server.

He explained: “We piloted the use of transmission of election results electronically in Sokoto, in Anambra, even in Osun. What happened was that we were trying to pilot to see the desirability of such technology in our electoral process.

“First, our budget came out very late; there was also issue (with) the Electoral Act. For these and some other reasons, the commission did not adopt that option. 2019 elections were conducted according to law.

“We used the Constitution of the Federal Republic; we used the Electoral Act and our guidelines for 2019 elections. If you look at the three instruments carefully, the issue of server was not highlighted.

“Once in a while, you will see an experiment going on but we have to pilot it before we will deploy wholesale for election. We did not use it because of circumstances beyond the control of the commission.”

In his opening remarks, the Resident Electoral Commissioner for Osun State, Mr. Segun Agbaje, said that the 2019 elections were largely successful despite daunting challenges that characterised its conduct.

He, however, lamented the “do-or-die” attitude of some politicians, which involved different illicit practices, including use of thugs to win an election at all cost.
He added that the commission in collaboration with security agents in the state drastically reduced the phenomenon during the general election

In a related development, a presidency official yesterday indicated that the report of European Union observers on the last general election was made public by the observers due to perceived breach of faith by the federal government.

The report of the European Union Election Observation Monitoring (EU-EOM) was released last Saturday and it was not particularly rosy for the federal government as its sundry agencies were indicted for a couple of infractions of the rules of the game, concluding that the election did not quite meet best international practice.

The International Republican Institute (IRI) and the National Democratic Institute (NDI) are billed to release their reports today even as analysts say they may not be substantially different from the EU conclusions.

According to the presidency official, who spoke to THISDAY on condition of anonymity, the observers released the report because they felt that the federal government breached an agreement it had with them to institute certain security reforms immediately after the election.

A senior government functionary told THISDAY in Abuja yesterday that the presidency had an understanding with the international election monitoring groups that they would not release their observations to the general public, while on its part, the presidency promised to carry out certain reforms within the security agencies and the presidency.
The source said the failure by the president to keep to his promise may have informed the recent releases of the groups’ reports.

In their report, the EU-EOM criticised the outcome of the elections stating that the election was marred by irregularities, including incumbency factor in the presidential and governorship elections, while also stating that the suspension of the former Chief Justice of Nigeria, Justice Walter Onnoghen, few weeks to the election was without due process and an intimidation of the judiciary.
The Chief Observer of the mission, Maria Arena, said from cross references, it was noted that 150 persons were killed during the election.

In the same manner, the National Democratic Institute (NDI) and the International Republican Institute (IRI) informed the Independent National Electoral Commission (INEC) yesterday that they will release their reports on the observation of the general elections today.

According to THISDAY’s source, the officials of the presidency agreed with some of the international based elections monitoring group that there would be no need to make their observations public, provided federal government was willing to carry out some reforms within the security agencies as a result of the growing insecurity in the country, and sack some presidential aides that were seen as clogs in the affairs of the President Muhammadu Buhari administration.

According to the source, ‘’The international election monitoring groups are apparently not happy with the presidency for not keeping to its promise. I’m aware that there were some agreements reached with some of these international election monitoring groups and senior government officials that they will pass their observations privately to government for necessary actions.

“In the said agreements, it was agreed that some government officials especially some senior aides of President Mohammadu Buhari, including top military hierarchy, would be relieved of their jobs. It seems they are not happy that two months after the general elections nothing is happening. They are now rushing to release and make their reports public as you can see with what the EU-EOM and the NDI and IRI are doing.
“We have been informed that the US based elections monitoring groups will release their reports on Tuesday (today).”

Meanwhile, while submitting the Joint reports of the NDI and IRI yesterday at the INEC Headquarters, Dr. Chris Fomunyoh, NDI senior associate for Africa Regional Director for Central and West Africa, and Ms. Elizabeth Lewis told the INEC Chairman, Prof. Mahmood Yakubu, that they will officially release the NDI and IRI report today by 11 am at the Transcorp Hilton Hotel in Abuja.

Apparently, pre-judging the reports, Yakubu said IRI and NDI monitored the general elections based on a partnership that predates the general elections, adding that based on the strength of the Joint NDI and IRI observation group that it would be difficult for any observer to cover all the polling stations in the country.

Yakubu said INEC accredited 159 organisations, of which 39 were foreign; 120 were domestic, which covered the election with 73,258 observers.
He assured them that INEC would study their recommendations and implement those that require administrative action in a bid to improve democracy in Nigeria.