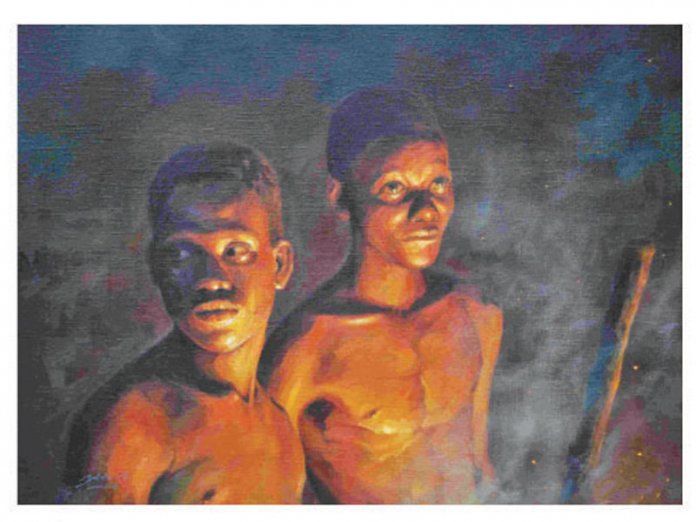 The sustainability of Mydrim Gallery’s annual exhibition Generations…, which enters its third edition on June 29, depends on the artists’ ability and willingness to transcend commonplace themes, which have saturated the mainly conservative local Nigerian art scene, writes Okechukwu Uwaezuoke

O. K., may be this is not really a back-to-the-basics clarion call to artists. But Abiodun Olaku, one of Nigeria’s best landscape artists, had well-founded concerns about the universalist trends in the art world. Specifically, the renowned Lagos-based artist, who by his own rights is a master in photorealism, is concerned about how swiftly draughtsmanship is being edged to the back-burner.

So, he thought a solution would be holding an annual exhibition of his acolytes aimed at “reviving sound art practice based on firm foundational principles of observation, creativity, skill and draughtsmanship.” To make this a reality, he had enlisted the help of the South-West Ikoyi, Lagos-based Mydrim Gallery’s proprietress, Sinmidele Adesanya.

Thus, the annual group exhibition, Generations–Future Masters Series enters its third year at the Mydrim Gallery’s premises along Norman Williams Street. Also featuring at the exhibition, which opens on Saturday, June 29 and ends on Saturday, July 13, are these same artists, who had participated in the last year’s edition: Emeka Nwagbara, Chinedu Uzoma, Damilola Opedun, Ezekiel Osifeso, Olajide Salako, Olufemi Oyewole, Oluwafunke Oladimeji, Segun Fagorusi and Raji Mohammed. They will be joined this year by Opeyemi Olukotun.

The artists, who were all trained and mentored at the Universal Studios of Art, are understandably unapologetic adherents or admirers of photorealism. Indeed, they are at a great risk of being derided as anachronistic by the high priests of conceptual art forms, whose surging waves have swept over the international art circles. Of course, not everyone is impressed by these trends. Here and there in the art world, lone voices of dissent challenge what they see as the downward spiralling of standards. Some like Olaku believes that many wanna-be artists hide behind these trends to divert attention from their obvious lack of skills. Also, Mrs Adesanya had, just before the opening of the last year’s edition of Generations…, questioned any trend “that does not place any particular emphasis on the foundational principles of art.”

She had alluded to these “forms of artworks” as riding on the crest of publicity through the “social media and other aggressive promotion platforms”, adding: “Although this form may gather momentum and become established over time, it will be a disservice to place more value, economic and otherwise, on this than the work of deeply talented artists. The danger in allowing this to happen will be an eventual lowering of standards.”

Talking about standards, a spotlight on some of the featured artists reveals a slow but certain growth. One of the artists, Emeka Nwagbara, hopes to regale his viewers with “quality renditions”, promising them “something new” and “improvements [on] old works”. Another exhibiting artist, Olufemi Oyewole, preens himself on the fact that he and his colleagues have “over the years…mastered their techniques and production quality”, adding that this makes their “relevance in the visual [arts] industry very potent.”

Then, Olufunke Oladimeji, the only female artist among the lot, sees the fact that another artist has joined the group this year as a validation of the primacy of representational art form, which she says can never become irrelevant.

Close up on the exhibition. Emeka Nwagbara, a 1997 graduate of Ogun State University, who invokes the artistic influences of such leading lights as Edosa Oguigo, Abiodun Olaku and Wallace Ejoh, among others, explores his theme, “The Women Around Us”, in series. While he adheres to the canons of representational art in the first four in the series, which are “Gele Series – White Gele”, “Gele Series – Vanity Room”, “Lobby Series – We Are Family”, “Lobby Series – At the Lobby”, he ventures into abstraction in the three, titled “The Prognosis of Gele I, II and III” and returns to realism in “Untitled I and II”.

Moving on to Chinedu Uzoma, who remains delightfully representational in his works. Through works like “The Search”, “Reap in Joy” and “The Bargain”, the 2014 Lagos State Polytechnic graduate waxes philosophical and seeks to direct his viewers’ gaze beyond coarse earthly existence. Ditto Olajide Salako, whose work “Supplication” revolves around the African indigenous religious rites. Of course, the latter’s works segue from works with transcendental themes like “Apprehension” to “Contemplation” to more mundane ones like “Oge”, “Omosalewa” and “Royal Apparel II”.

Olufunke Oladimeji, meanwhile, continues to produce works proclaiming her dewy-eyed adherence to Olaku’s themes and styles. Works like “The Council”, “Twilight Hustle I”, “The Terminus” and, to some extent, “Fishermen’s Quarters” strongly evoke this influence.

The newbie, Olumide Olukotun, a Ladoke Akintola University of Technology, Ogbomosho graduate, is generously colourful in his depictions of human expressions and anatomy. This is evident in his works “Customer Come II”, “Matters Arising” and “My Change”, which revolve around the activities of the commercial motorcycle riders in typical Lagos neighbourhood streets. His night scene paintings, “Survival I” and “Survival II”, distinguishes him as a really talented painter. So do his portrait paintings, depicting young Nigerian women, titled “Onome II”, “Eunice” and “Ajoke”.

Of course, there are genuine concerns among the exhibition habitués that works in group exhibition tend to blur into sameness and sometimes lapse into a numbing predictability. Yet, flickers of brilliance here and there somewhat allay these concerns. Olufemi Oyewole’s delightfully painted “Gone Like Yesterday”, “Same Story”, “Contemplation” and “Table for Two” are works that are hard to ignore. Not even a blind adherent would deny the masterly attributes of these works. Nor would anyone fail to recognise Raji Mohammed’s skilfulness in the works “Evening Light III and IV”, “The Wait”, “My Little Thought” (Expectation Series), “Warm Communion IV” (Intercession Series), “Yellow Serenity” (Yellow Scarf Series) and “Prepping for Nightfall V” (Illumination Series).

Then, there is Segun Fagorusi, an Obafemi Awolowo University, Ile-Ife graduate of fine and applied arts and a University of Ibadan Master’s degree holder in African visual arts, whose works focus on elderly people in Nigeria and their deteriorating living conditions. His painting “Iya Alaro” depicts an aged woman fondling an Ankara print fabric as she stands against the backdrop of another yellow-themed fabric. “Who Knows?”, another painting by him, shows six destitute women sitting on the steps of a building in the early stages of dereliction and on whose wall is written: “THIS HOUSE IS NOT FOR SALE. BEWARE OF 419.”

Perhaps, Damilola Opedun, a 2010 Auchi Polytechnic graduate, remains the most exciting impressionists among the lot. This is a fact that amply corroborated by his depictions of scenes from the Makoko Lagos lagoon-front shanty communities. The viewer is enthralled by works like “Jacob’s Wall”, “The Beloved I, II and III”, “Light of Hope”, “Focus”, “Gratitude”, “Water and Fire” and “Meeting Place”.

Finally, among all the works by Ezekiel Osifeso, “Bewildered” and “Moment of Truth” stand out in their brilliance. Yet, the fact that these works, like those of his colleagues, rehash the Lagos backwater street life can be tiresome to an art public that yearns for novelty.

Indeed, the sustainability of Generations… depends on the artists’ ability and willingness to transcend commonplace themes, which have the regular fare of the mainly conservative Nigerian art scene. Meanwhile, the exhibiting artists’ genuine aspirations to masterhood may be dealt a fatal blow unless they up their game through deeper exploration of their themes.