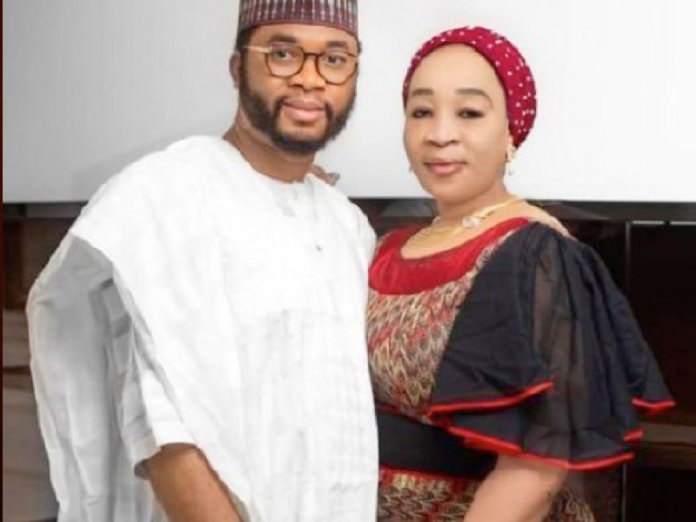 Hajia Hauwa Suntai, wife of the late governor of Taraba State, Danbaba Suntai, is back in the news!

Until now, most of the reports written about her bordered on her low periods, when her late husband was incapacitated after involving in a crash.
The unfortunate incident had thrown her into a prolonged period of pain, anguish, physical and emotional torture.

For five good years, she nursed her bed-ridden husband until he breathed his last.

Yet, for another two years, she has had to bear the pains of widowhood, with its accompanying discomfort. Now in her 50s, Hajia has decided to put together the pieces of her life and moved on. Her decision has been generating mixed reactions, after it was reported that she got married to a younger lover, Haliru Saad Malami, aka San Turakin Malumfashi.

Since the news of her wedding to Malami, CEO, ITBAN Global Resources Limited, not a few have condemned her.
But her fans have continued to stand in her defence , saying love has no barriers.

According to them, Hauwa has not committed any crime by agreeing to spend the rest of her life with Malami, who is said to be in his 30s and a cousin to Turai Yar’Adua, wife of the late Nigeria’s President, Umaru Yar’Adua.

It will be recalled that the late Suntai was involved in a plane crash in Yola and was flown to Germany for treatment.

In August 2013, he was flown back to Nigeria, after undergoing treatment overseas for 10 months, following claims by his supporters that he was fit to govern.
In November 2014, when Suntai was flown to a London hospital for treatment, he was accompanied by his wife, Hauwa.

In 2015, in the build-up to the general election, Suntai was hurriedly flown back to Nigeria. In all, Hauwa neither wavered nor faltered in the discharge of her matrimonial duties and responsibilities to her husband, who eventually passed on in June 2017.