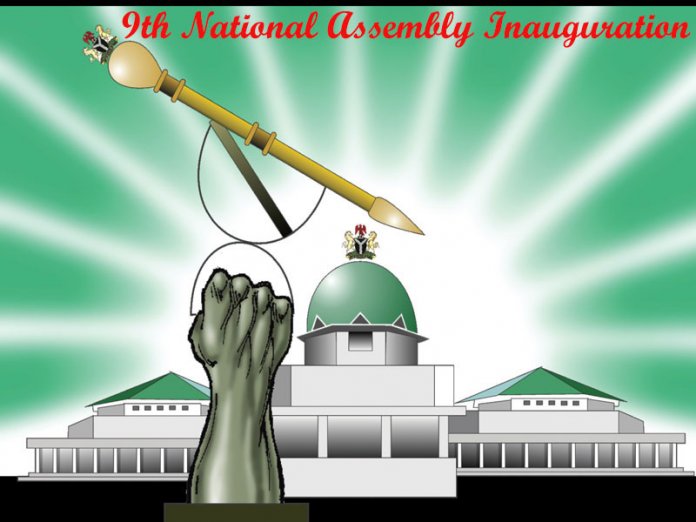 7.00 PM
House of Representatives members-elect are currently being sworn in
6.35 PM
Hon. Gbajabiamila takes Oath of Office and Oath of Allegiance as Speaker of the House
6.19 PM
Femi Gbajabiamila (APC, Lagos) has been elected Speaker of the House of Representatives.
Gbajabiamila, backed by the ruling APC, defeated his challenger Umar Bago (APC, Niger).
Gbajabiamila scored 281 votes while Bago polled 76 votes. 358 Members-elect voted, while one vote was voided.
5.52 PM
Voting ends. Counting of ballot papers begin

Members are openly displaying their thumbprinted ballot papers to Gbajabiamila and Jibrin.
3.55 PM
Uproar in the House as some members took photographs of their ballot papers

Voting commences in the House of Representatives for election of Speaker
3.31 PM
Bago accepts nomination. He said: “This is aspirations is not about me but of a people who have brought to the people what we have today as a government. It is based on a constitutional provision.  It is about justice, equity and fairness.”

Clerk of the Senate, Nelson Ayewoh, confirms the presence of 107 Senators-elect after the roll call

Senators-elect are protesting the mode of election of principal officers.

Clerk of the National Assembly,  Mohammed Sani-Omolori has told the senator-elects that the 2015 standing order will be used for the election.

“I only answered your question out of respect. I won’t entertain any further question,” Sani-Omolori told protesting senators-elect.

“I didn’t receive any court order”, Clerk of the National Assembly, Mohamed Sani-Omolori told Senators -elect and asks Clerk of the Senate, Nelson Oyewoh to go ahead with the roll call of Senators-elect present.

Oyewoh now reading the names of Senators-elect in alphabetical order state by state.

The only female speakership candidate, who reportedly stepped down for Gbajabiamila, Hon. Nkeiruka Onyejeocha arrives

Clerk of the National Assembly, Mohammed Sani-Omolori, and Clerk of the Senate, Nelson Ayewoh, arrive the Senate Chambers for the inauguration of the 9th Senate to commence.

Chairman of Governors Forum and Governor of Ekiti State, Dr Kayode Fayemi, led 18 other APC Governors to the Senate Chambers

Gbajabiamila arrives to a thunderous ovation by his supporters

Boma Goodhead, a lone voice in the House shouted Bago’s name contending with the thunderous chant of Gbaja.

The Senators-elect who arrived in the company of their spouses made straight for the Senate chambers where the inauguration is expected to commence by 10 am prompt.

More than 170 House members are already in the chamber.