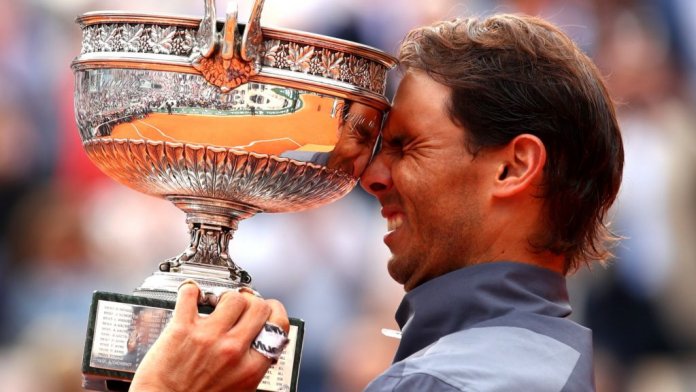 The Spaniard won for the third straight year at Roland Garros with a 6-3 5-7 6-1 6-1 victory in a breathtaking and high-quality final.

The 33-year-old is the first player to win 12 singles titles at the same Grand Slam tournament. It is Nadal’s 18th major title.

That leaves the left-hander two adrift of Switzerland’s Roger Federer, who he beat in the semi-finals, and three clear of Serbian world number one Novak Djokovic, whose bid to hold all four majors was ended by Thiem.

The second seed slid to the red dirt in triumph when he clinched victory on the second match point, lying behind the baseline with his arms outstretched as he contemplated the magnitude of his achievement.

With clay plastered over his back, he clambered to his feet and took the acclaim of an enthralled Roland Garros crowd which has become accustomed to seeing him triumph.

Hundreds of Spanish fans milling around outside Chatrier, identified by their red and yellow flags, football shirts and facepaint, has become an almost annual event before the men’s final at Roland Garros since 2005.

Nadal has won on all but three of his appearances here, with his only defeats coming in a shock 2009 fourth-round loss to Robin Soderling and a 2015 quarter-final defeat by against Novak Djokovic. In 2016, he pulled out before the third round with injury.

That meant he went into Sunday’s final with a Roland Garros record of 92 wins and two defeats.

A fiercely contested first set was closer than the scoreline suggests, Nadal rattling off the final four games to edge ahead after 55 tense minutes.

Both players understood the importance of making a quick start, Nadal attempting to take advantage of any mental and physical fatigue in his opponent, who only finished his delayed semi-final against top seed Novak Djokovic less than 24 hours earlier.

The result was a physical battle, full of intense rallies as each man tried to gain the upper hand by brute force.