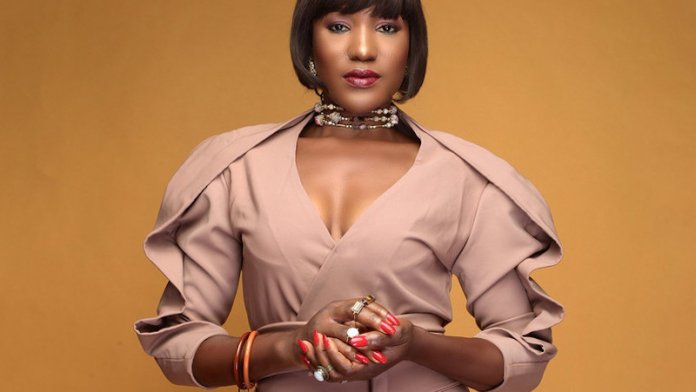 Plush hair, resplendent face, luscious crimson lips, Judith Audu’s eyeballs sparkle. With an effervescent smile, she has lit the world of many people. In her characteristic gait, she exudes elegance and brilliance either as a movie star or as a filmmaker. Audu has been there, done that – exceptional and methodical in artistry, the Nollywood star is dramatic, creative and inspirational. A woman of substance and at the pinnacle of her creative ebullience, her shelf is filled with award trophies as she stands tall like a well-decorated five-star general. Funke Olaode explores the intrinsic fabric of her excellence

There are millions of women. Very few are Amazons. Judith Audu is an
Amazon. If you can read lips, you will notice the words playing on her lips: “I have the Midas touch!” You look at her again: you notice her stately figure and her sizzling state of sexiness. She packs brilliance and beauty in simplicity. Her artistic essence has not gone unnoticed in TV series like Emerald and Tinsel.

Plush hair, resplendent face, luscious crimson lips, Audu’s eyeballs sparkle as she sits as if floating on a piece of cloud with an effervescent smile that illuminates her apartment. In movies, she sparkles like twinkling stars in midnight skies. She is more than a queen of make-believe. She has lit the world of many people, on screen and off the screen.

In her characteristic gait, Audu has never failed to exude elegance and brilliance either as a movie star or a filmmaker. Audu has been there, done that – exceptional and methodical in artistry, the Nollywood star is dramatic, creative and inspirational. A woman of substance and at the pinnacle of her creative ebullience, her shelf is filled with award trophies as she stands tall like a well-decorated five-star general.
“I have always romanced the idea of being on TV,” says Audu as she reflected on her incursion into the creative industry. “But I used to be a shy person and never thought I would be able to do it.”

If she was shy, her desire was complicated by the fact she did not know how to realize her dream.
“I had no idea how to even go about it; who to talk to or where to go.
So after my secondary school education, my friend and I would go to Dolphin Estate, where Regina Askia used to stay to see if we could meet her as she was one of my favourite actresses then,” recalls Audu about her journey to moviedom and eventual stardom.
From Dolphin Estate, she also went to Surulere in search of another screen goddess, Liz Benson.
“But all our efforts amounted to nothing. They all got me into trouble at home as no one knew where I was going. So I dropped the idea and concentrated on my studies,” Audu adds.

Beneath her heaving, plunging cleavage lies a passion, in one breath electric and eclectic. As the only daughter of a military officer, you can imagine her personal fabric made wholly of toughened texture.
If everybody was against her dream, her dad was not one of them. She explains why: “I have a father who is very liberal. I had an upbringing of becoming an independent person who makes decisions on his or her own, knowing full well everything that one does has consequences One should be responsible enough to stand by it.”
Her parents, unlike many others, gave her their blessing when she chose to become an actress.
“I remember when I was going around looking for how to get into acting instead of concentrating on my studies and my dad found out,” she recollects with a distant fright in her tone.

“I thought he would be furious; instead he sat me down and told me there was a time for everything and it is never too late to be anything I wanted to be. He told me that my future wasn’t running away.”
From that moment, Audu exerted herself to become what shes had always dreamt and desired to become. A native of Edo State, the Nollywood star has conquered the world and she is creating her own universe – beyond her early childhood in the bustling barracks brimming with bullies. Audu represents zest, hard work, discipline, courage, and respect.

Against that backdrop, Audu took solace in French Village and later in the University of Lagos. At Unilag, she joined a group, Theatre 15, where she learnt the rudiments of acting, discipline and other things she needed to know to become successful. In 2004 (while still a student), a breakthrough occurred: while Denrele Edun – a member of the T15 – was working with SoundCity,
Tajudeen Adepetu invited her to feature in the TV series, One Love. In that series with one cameo, Audu emerged like a whirlpool.

She sparkled in the TV series, Emerald, with her character, Mofe, who was in the police force and had to struggle with her single father who doubles as her boss, a nonexistent love life. After that, Tinsel came calling “I totally loved it,” she lets out with glee.
Her quiet revolution and pedigree did not take long to be noticed. In one year, she starred in two movies – Life is Beautiful and Tears of the Ghetto 2 by Femi Ogedengbe, and Hammer by Izu Ojukwu.

That same year she had to stop acting so that she could focus on her studies. Two years after, she was in Kebbi State serving her fatherland under the one-year compulsory National Youth Service Corps (NYSC) programme – she was appointed the drama director.
In 2010, she returned to the movie industry. But a lot had changed when she made that comeback.

“It had changed; everything was different,” she admits. “I attended an audition for Tinsel and I got a call. I was given the role of
‘Doctor’. I featured in a lot of TV series. At a point, I was on TV from Sunday to Saturday.”
Since her debut in moviedom, Audu has not looked back, starring in Gold Statue (presently showing in cinemas in Nigeria and Ghana), alongside Richard Mofe Damijo (RMD), Sola Sobowale, Alibaba, Tina Mba, among others.

Even though she is living happily ever after, Audu’s trajectory is not a bed of roses without thorns and thistles.
“The industry is a peculiar one,” Audu acknowledges with a tinge of reality in her voice. “It’s like an applicant that continuously goesfor interviews. After a job, you have to immediately start thinking of the next job – how to bring it to life, getting an investor, pitching to an investor, etc.”
Like many other brilliant minds with fantastic creative ideas, Audu’s major challenge is funding. She keeps hoping to find an investor that believes in her – that will invest in her projects. Driven by success and ingenuity, her executed projects have always been top-drawer.
Asked if sex scandal rings a bell in Nollywood, Audu did not simply shrug her shoulders.

“I sincerely don’t think there is any industry in the world where sex for a job doesn’t come up. So, Nollywood isn’t an exception,” Audu argues. Beyond the sexual overtures, the movie star is more concerned about what happens after the sexual offer.

She explains: “The question usually is what happens after. Someone offers you sex for a role, walk out! The industry is filled with independent producers that employ cast and crew based on merit as they have to make their money back – so, they don’t joke around.
“So, we have tried spreading the word that upcoming actresses and actors shouldn’t be desperate for roles so when they meet ‘animals’ like that they should walk out and never let anyone feed on their desperation.”

As elegant as Audu is, she does not hesitate to get her hands on the grind as she is already cooking up two feature films – working on a documentary about women with special gift for fertility. The cast of the film is expected to be an all-women ensemble and the filming will be across four states.
Audu’s trajectory began as a pupil at Navy Town Primary and Secondary School, Ojo, Lagos. After graduation, she went to French Language Village, Badagry in 2001, where she obtained a diploma in French.
Thereafter, she was admitted into Unilag in 2002 to study French (first and master’s degrees). Inasmuch as she loves filmmaking, her desire to achieve further academic heights lie within her horizon.

“I just threw everything away and gave my 100 percent to acting and filmmaking. During my master’s class I was already making arrangements to return for my PhD, which I would love to still do,” she confesses.
“I guess sometimes when you have this burning desire that makes you lack concentration in every other thing and guarantees you fulfilment and happiness, you get to take it and not look back, that is what acting is for me.”
Audu finds acting and filmmaking compelling, sometimes overwhelming – the emotion, the passion, the raw energy that go into such an artistic venture just cannot be shared with another desire.

“I derive so much joy from it and just keeps wanting to be in that space,” admits Audu.
She just wants to keep becoming different people, keep living different lives, keep creating new realities, and keep bringing stories from nothing to life.
Apart from being an actor and a filmmaker, she thinks “I may just end up in the diplomatic field – as an ambassador”.