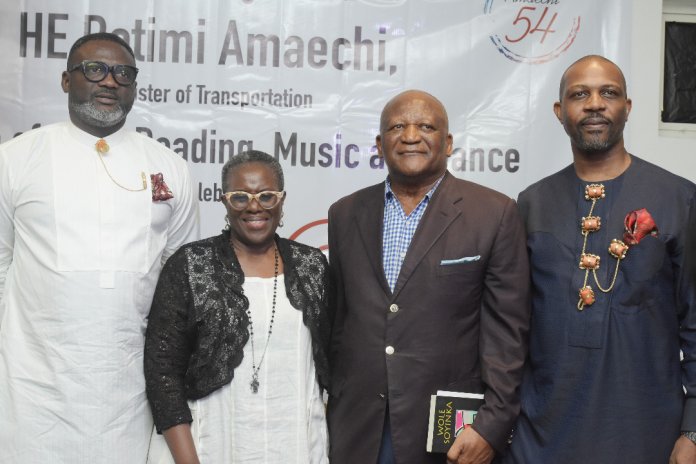 Soft background music signaled the start of the exclusive book party where the literary legacy of Chibuike Rotimi Amaechi, Nigeria’s Minister of Transportation and Former Governor of Rivers State, was celebrated at the Kongi building, Freedom Park, Lagos. A community of book enthusiasts gathered for a 90-minute book reading session in honour of this literary enthusiast who turned 54 on a day recognized globally as the Children’s Day. As a precursor to his study of Law, Amaechi studied English and Literature in his undergraduate years at the University of Port Harcourt, which had inadvertently prepared his heart for literary appreciation.

It was no surprise that in celebration of his 54th birthday in Lagos, the friends and associates of Amaechi, led by Prince Tonye Princewill and Hon. George Tolofari threw a tasteful book party in his honour at Freedom Park, Lagos.

Encomiums were showered on Amaechi as the literati recounted the numerous contributions of Amaechi to the reading culture. As a governor, a milestone in literary arts was reached in Rivers State. Beginning with his support for the Rainbow Book Club, his backing for the advocacy programmes for reading culture led to Port Harcourt being named as the 2014 UNESCO World Book Capital City. Hence, for the man known as “The Lion of the Niger Delta’’, it was just apt to have a book reading session with light music, cocktails and luncheon for select book lovers, including poets and authors.

With the introduction of guests done by THISDAY’s Group Politics Editor, Nseobong Okon-Ekong, the session had as compere, the former Editor, SUNDAY Guardian and cultural activist, Jahman Anikulapo who gave a rousing remark before introducing the members of the reading panel.

“There is a book in everyone’’, Anikulapo observed as he reflected on the collage of episodes that formed the narratives in Prof Wole Soyinka’s books which were read by members of the reading panel. They include the poet and author, Mr. Reginald Ofodile who gave a performance poetry ending with one that was a thought-provoking commentary on the girl-child.

He was joined by the self-confident grandson of the first Prime Minister of Independent Nigeria and an avid reader, Mr. Abubakar Tafawa-Balewa who is also known as the Publisher, Mode Men. He read a few lines from Chapter 22 of The Man Died: Prison Notes of Wole Soyinka about the many ghosts that the author contemplated mentally in the prison, emphasizing the oxymoronic tilt of the writing.

The founder of Didi Museum, an environmental activist and arts enthusiast, Sir Newton Jibunoh was the oldest on the panel. Perhaps, it was no coincidence that he read a few excerpts from Chapter four of The Man Died which reflected the solemn mood of the writer who requested from the prison authorities a typewriter because his writing was bad. Others who read include the film critic, Rick Nwanso and the Queen of the screen and stage, Joke Silva who read from the Nobel Laureate’s childhood memoir, Ake: The Years of Childhood, published by Bookcraft. In a sort of “Tales by Moonlight’’ spirit, Silva delivered a dramatic reading of the literary piece using captivating tone and inflections to convey the mental images of the written words.

Although, the compere had made it clear that the gathering was not a forum for political discourse, still the lines from Soyinka’s prison memoir provided historical allusion to the Biafran war, the post-independence period, patriotism and political tyranny.

“I think we have done justice without a shadow of doubt even without the presence of the celebrant,’’ Tonye Princewill said in his closing remarks while expressing his delight at the rich and concise book reading session. Princewill is one of the Executive Producers of the historical celluloid film, ’76.