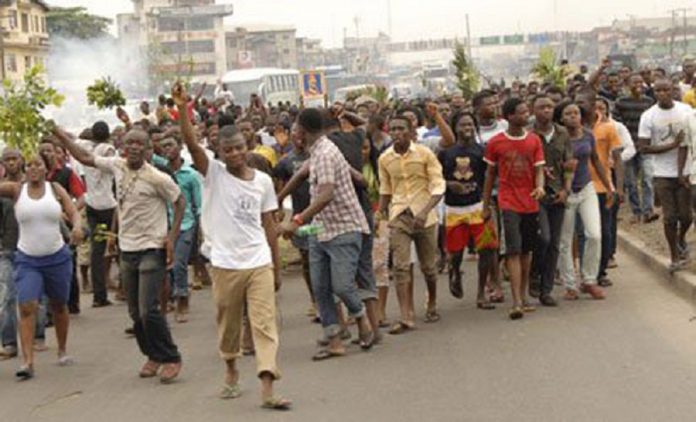 There was pandemonium Wednesday in the ancient town of Iresa-Adu, headquarters of Surulere local government of Oyo state, following the declaration of one Abraham Olafimihan Adeyeye Oyerinde, as the new monarch of the town.

THISDAY gathered that youths numbering over 100 took to the streets in protest against the declaration of the man as the traditional ruler of the town.

His declaration as the new Aresa of Iresa-Adu, sparked off protests from sons, daughters and residents of the town which include both the youths and the elderly, who argued that filling the vacant stool had earlier resulted in litigation yet to be determined by an Oyo state High Court.

The protesting youths barricaded major roads leading to the town and burnt disused tyres and chanted war songs, challenging the man to come out of his hiding place, while praise singers and drummers contracted by him were also beaten to a pulp during the protest which lasted close to five hours.

The development however, compelled security operatives which included the police, personnel of the Directorate of State Security (DSS), among others to enforce the law and pacify the protesting youths.

It was however learnt that an Oyo state High Court sitting in Orile – Igbon area of the local government, had in suit number HOI/04/2019, dated 17th April, 2019, restrained the state government as well as Adeyeye Oyerinde, from proceeding with nomination and other processes leading to the installation of the new Aresa-Adu of Iresa-Adu, pending the heating and final determination of the suit.

Others restrained in the interim injunction included the state Governor, Attorney General and Commissioner for Justice in the state, Secretary to the Local Government, Raji Oloyede, Tunde Oloyede, Nathaniel Oyediran and Oyewumi Oyeniran.

But in what appeared as defiance to the court order, Adeyeye Oloyede allegedly in connivance with others however, went ahead and installed himself as the new monarch of the town.

The quick intervention of the security agencies most especially the police from the Iresa-Adu and Ogbomoso Divisional headquarters, saved the man as he was whisked away to an unknown place.

The state Police Public Relations Officer (PPRO), SP Gbenga Fadeyi, when contacted on the development, said the situation had been brought under control.

According to him, it is the duty of the police to maintain peace and order and “that includes keeping and maintaining the peace in Iresa-Adu. That we will not shy away from.”