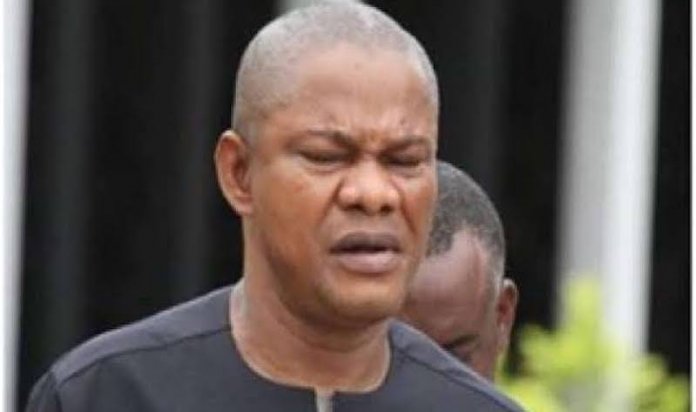 The court, however, gave him an option of N42 million fine.

Justice Mojisola Olatoregun had on May 23 found him guilty of money laundering and converting the agency’s funds to personal use.

Obi was sentenced alongside Dismal Alu, who was the second defendant in the case.

But the judge discharged the defendants on counts one and three of the charge.

The court also refused to order the forfeiture of his seized assets.

The duo had been standing trial alongside two firms, Grand Pact Limited and Global Sea Investment.

They were charged with N225 million fraud.

The judge held that the prosecuting agency, the Economic and Financial Crimes Commission (EFFCC), proved the charges against them beyond reasonable doubt.

In the eight counts filed against them, the EFCC said they conspired among themselves on August 5, 2015, to convert N225 million belonging to NIMASA to their own.

The prosecution said they acted contrary to sections 15 and 18(a) of the Money Laundering (Prohibition) (Amendment) Act, 2012.

To prove the allegations, the EFCC called eight witnesses and tendered 32 exhibits.

At the close of the prosecution’s case on November 11, 2016, the convicts filed a no-case submission, insisting there was no prima facie case against them.

But in a ruling on February 21, 2017, Justice Olatoregun dismissed the no-case submission and ordered them to enter their defence.

After the judge convicted them on May 23, 2019, the EFCC urged the court to impose the maximum punishment prescribed by the law on the convicts.

The prosecuting counsel for the EFCC, Mr. Rotimi Oyedepo, had told the judge that Section 15(3) of the Money Laundering (Prohibition) Act, which Obi and Alu were convicted of violating, prescribed a maximum prison term of 14 years for an offender.

He said though the law permitted the judge to exercise discretion in sentencing, the minimum limit was seven years.

He, however, argued that Obi and Alu did not qualify to enjoy the court’s discretion because they allowed the judge to go through “the rigour of full-fledged trial” rather than own up and opt for plea bargain at the start of the case.

Oyedepo said Obi and Alu’s case had presented the judiciary with “an opportunity to send a clear signal to public servants and those entrusted with public offices not to breach the trust reposed in them.”