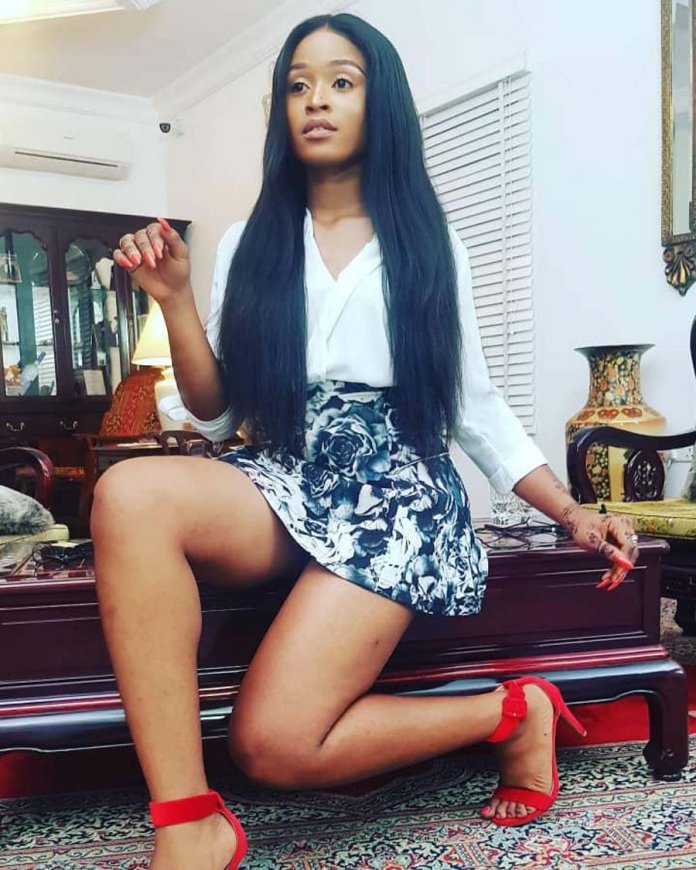 • There’s the Need to Break Boundaries… The World is Evolving

Sultry Nollywood actress, Marvelous Dominion stunned theatre audience last year when she bared much to the imagination of all during a stage play titled ‘3Some’. The psycho-erotic drama, written by award winning playwright Jude Idada, will be staged again at the Muson Centre Lagos on June 8 – 9 on the platform of Duke of Shomolu Productions, helmed by Joseph Edgar. The much anticipated play, which has ace broadcast personality, Olisa Adibua and foremost comedian, Ali Baba as its co-executive producers, is expected to surpass the height it reached last year, with the “adventurous and open minded” Marvelous Dominion still as its provocative lead cast, miming squirts and orgasmic reaction to the words live on stage. In an encounter with Ferdinand Ekechukwu, the London trained actress bares her personality and more

As regards the upcoming play ‘3Some’, it is believed you still taking same role and in same fashion like you did the previous time?

It is not often that you see a Nigerian act take up such daring and seemingly controversial role. In fact never before seen on stage play in Nigeria, what is the motivation?

Awww thank you. I know. I feel there’s a need to break boundaries. The world is evolving, so why wait? Why not evolve with the world? A lot of people are scared to break the norm. Might be because of religion or society issues, but I always say the society did not create you, and religion has no say in my life in this matter. Allow me preach the gospel for a second, and God created us, we came out naked with no fears, no shame until Eve ate the Apple, then shame was introduced to us. They said I showed the world my body, oh yes I did – my body is the temple of the Holy Ghost. I am a Christian; God himself sees my heart- I worship him from the depth of my heart, so going naked has got nothing to do with religion to me.

I know sometimes going a little bit out of the norm could be a bit precarious, but if you got the mind for it, then why waste time? You see, Art is beyond fine art. It’s beyond painting on canvas; it’s even beyond sculptural making. Art is something that we seem to know when we see it or hear it or experience it. My own definition of art is the sharing of one’s inner thoughts, feelings, emotions, visions, and struggles through multiple mediums. To me, art is everywhere – it surrounds us on a day to day basis, which takes us to the story that surrounds ‘3Some’. You feel me?

Feeling you could be saying you are pretty much adventurous because that’s a step too far considering your definition of art?

Yes, I am absolutely adventurous and very open minded. I am unapologetic.

And how about the financial motivation and inducement in making you bare it all live on stage?

Of course, I am coming back for a second show after a year plus, means the financial motivation is well stimulated. I would also like to correct something here. In as much as this is partially right. To be honest, I could never get paid enough to bare it all live. It’s the passion and love for what I do that matters more to me than the money. Like I said, art can be expressed in many ways. Money is never the motivation for an artist.

Yes, absolutely. I am an Actress.

Take us through your acting journey?

Since my return from England, I have featured a couple of movies and sitcom before and after the stage play ‘3Some’. Movies like: Love of a Daughter by Sarah Donald Onyeachor; Girls by Iyke Olisa; Hustle TV Series; Girls Quarters TV Series; Linda Ikeji Prank; Crazy People by Moses Inwang (Sneeze Films); Abiku, Soldier Story 2 by (Frankie Ogar Production); Almost Perfect by Yinka Ogun; Battle Ground (MNET TV series), amongst others I can’t even remember.

Take us through your childhood growing up?

I was born and bred in Lagos; attended my primary and secondary school here in Lagos, before going to the UK to study film acting.

How did your acting journey start?

I started acting at the age of 15 or 16. But I had my major gig at 17, and then I went further to study ‘Acting for Camera’ in London. After this, I studied ‘Contemporary Art’. After my studies in England, I returned to Nigeria to continue with my career, but ventured more into Art- being that I got to really love art plus I was working for an art and film company.

But now, I am more focused into my acting career.

Which was your first acting gig?

It was with Sarah Donald, titled Love of a Daughter. I played one of the leads in the movie, alongside Chika Ike, Ngozi Ezeonu, Ken Erics etc

How was it like the first time on set of a movie?

It’s something I’ve always loved and very excited about. So it was all fun for me, then I began to take it more seriously.

If you weren’t an actor, what other career choice would you have taken?

Hmmm….that’s a really good question and I love it, you know why? Because I’ve always thought to myself ‘Marvie you would love to produce this and that’ – which was/is why I ventured into Perfumery and that’s a topic for another day. Fashion, I love fashion so much, I would definitely love to create my own wears, looking forward to that. Film making is also where my heart is, someday soon, all these dreams of mine will come soon. I’m working towards all of these and many more. Fingers crossed.

Nollywood is replete with cases or allege cases of sexual harassment. What’s your experience if there had been any?

Yes. I’ve had countless cases of sexual harassment related to film acting in this country. Studying abroad or being well trained doesn’t take the fact away that most of these movie directors only see you as a piece of meat in bed, all because they feel like you must be desperate to be on camera or looking for fame. I have rejected those stupid offers and turned deaf ears to them saying ‘xyz” actors do this, so why can’t you?’ I am like, ‘bro you are not even worth my body or my investment,’ and then they call me rude. Besides, to be honest, ain’t really doing this for the fame at all – I am not desperate for this. I am a real artiste and I’ve got strong passion for my craft, so if they can’t see it, then they can as well go to hell. Most of all, I am very grateful for the ones that see beyond sex and work with me. Let’s see how far those nymphomaniacs go. I had planned to expose these people in the future, but I recently had a change of heart, because I am worried for their innocent wives. I only pray that nemesis catch up with them at some point. I believe that nature will take its course.

Who was/is your Nollywood crush?

I have got none to be honest. I have not even done crushing on my man

Are you in a relationship now because the last time I heard you speak during a chat with online platform you said you are single?

Yes o! I was very single last year; I guess all the Lagos men ran away from me. But hey….yes I am in a beautiful relationship now.

There’s an excitement of him seeing me performing that role live, as he didn’t get to see it the first time I performed. And he’s someone that appreciates art and understands my work.

Describe for us your man, and is he in the industry?

Oh no, he’s not. He’s an amazing soul

Does he really fit your ideal man?

Yes and even more. He’s just everything

Who were those that influenced you in the movie industry while growing up?

What keeps you busy/up when you are not on set?

Oh my darling, I’m working on a bunch of stuff. I’ve got a Perfumery line I plan to start up when the time is right, so when I am not on set, I am working on the logistics of that project and other things I cannot reveal for now until time is right.

Have your parents been supportive or opposing of your choice of career especially that it takes you playing nude on screen and on stage?

Oh my parents have been super supportive. My parents are very liberal, so it was very easy for them to understand that concept of art

I actually think the script was just perfect the way it was. The writer Jude Idada is a fantastic artiste and I applaud his creativity with all that surrounds the story, just too good. He has my respect forever.

Should you found yourself in reality in the shoes of the wife whose husband was too busy to satisfy her sexually as in the 3Some script and so she resorted to online pleasure with another man, what would you have done?

I would try to understand what his reasons are and see possible ways of changing his notion or most probably teach him how to satisfy me sexually to keep our marriage intact.

As an ‘open-minded and adventurously’ sexy being, have you ever engaged in the sexual act of 3Some?

I have never engaged in a 3Some act.