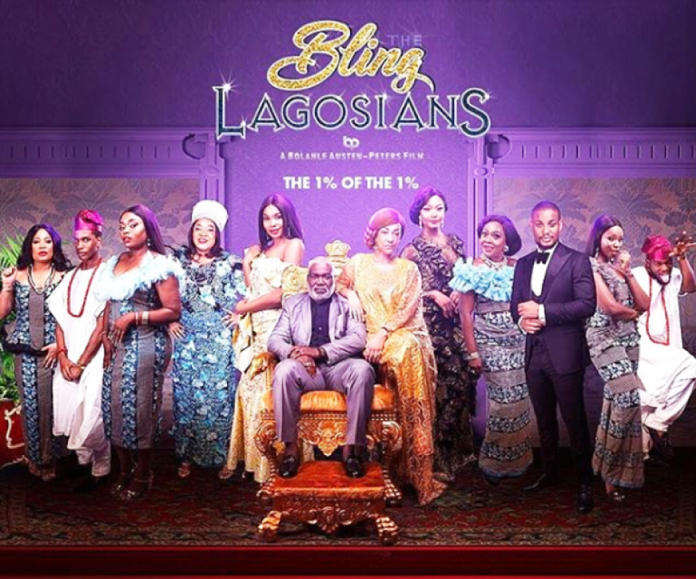 The wait, considerably, is worth the while for Nollywood buffs and fans of famed theatre practitioner Bolanle Austen-Peters, following her feature directorial debut ‘The Bling Lagosians’, which will start screening across cinemas nationwide from June 28. The star studded movie has shortly after been completed last year remained one of the Nollywood movies poised to come out this year and one of the more fun ones. According to Bolanle, viewers should “get ready to laugh, cry and see Nigerians living large.”

The Bling Lagosians tells the story of a powerful Lagos socialite who prepares for her extravagantly flamboyant birth-day party. While she is planning the party of a lifetime, her husband fights to prevent foreclosure of their family company for billions of unpaid loans. The storyline chronicles the societal induced pressure of keeping up appearances and maintaining a lifestyle and image that is sometimes in contrast to what is sustainable.

This is a story about the fake lifestyles of many Lagosians. Telling this story, Austen-Peters had to rely on her knowledge of the Lagos high society. “This movie idea came to me by just watching… you know I kinda like to watch a lot. So it’s about my friends, it’s about me, it’s about high society Lagos, lifestyle living large, but in this case it’s a lampooning of society; people who pretend to have, but in reality, they don’t have any more and they are struggling to keep up with the jounces.

“So, it reveals a lot of the fake underbelly of Lagos, a lot of people who pretend to be what they are not. But in doing that, I showcased very, very beautiful homes, fancy cars, and fancy lifestyle. A lot going on and the messages are very, very strong.” Austen-Peters had revealed that she wanted the film to mirror the reality of her Lagos experience, which the movie trailer shows in detail.  It reveals party preparations, showing the robust cast, as they carry out their day-to-day. Notably, more and more, parties are becoming the props on which recent Nollywood movies – The Wedding Party, Chief Daddy (Party) – and now The Bling Lagosians (Party) – take some hold.

In the background, Niniola’s recent song ‘Designer’ plays, and got one thinking if the sound was originally done for the movie, been that the trailer follows the music video shortly after release, showing just as glamorous and lavish the party scenes where the guests arrive in flashy cars and automobiles (Roll Royce, Ferrari, Bugatti) connoted in same fashion as in the song’s lyrics, featuring dancers and an opulent wardrobe.

The ‘Bling Lagosians’ (party) is magnificence and materialism, in such that Elvina Ibru’s character envisioned and says to her acolytes, “My party must be unrivalled in the land of Eko partydom. If any party should top mine, then we have failed woefully”, with a brag that left them perplexed. From the beautiful scenery and display of class in the clip, the two other above-mentioned ‘parties’ got nowhere closer to the ‘Eko’ shindig, a statement kind of.

While the trailer doesn’t give too much of the plot away, the Bolanle Austen-Peters Film production in collaboration with Swirl Films, Ornament Productions, Misa Productions, and B2B Integrated Media and distributed by FilmOne Distribution and Productions, is sure to be a great watch as Austen Peters has shown that she has a knack for creating compelling stories that showcase Nigerian culture with plenty of humour and social commentary.

This happens to be Austen-Peter’s directorial debut after she distinguished herself in stage directing and production, with her theatre company Bolanle Austen Peters Production behind award winning stage plays such as Saro and Wakaa, the latter becoming the first Nigerian stage play to ever be featured on London’s famous West End.

Austen-Peters had earned accolades when she co-produced her first movie on the deadly Ebola virus, ‘93 Days’.

Her productions outfit has only existed for some few years, but on the account of its successes, Austen-Peters says she feels like it has been in existence for decades. Part of the successes she ascribes to the abundance of talents in the country. From the records, it is almost impossible to talk about Nigeria’s vibrant art and entertainment scene today without mentioning Bolanle Austen-Peters.