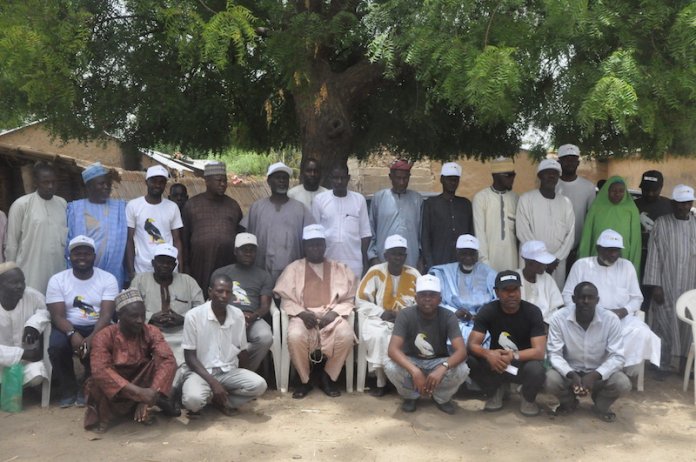 Participants at the Nguru meeting

The meeting opened with an introductory remark from NCF Project Officer, Harry Hanson who highlighted the threats against vultures in the northern Nigeria, calling on all in attendance to rise up to stop the killing of vultures for sale and belief-based uses. “Angulu (vulture) is going into extinction because of killings here and there. If we don’t stop the killing and make use of alternatives, in the next few years, we won’t have Angulu here again” he said.

Dr. Sulaiman Mohammed, a Biological Science Lecturer from the Federal University Dutse, Jigawa State, educated the listeners more on the importance of conserving vultures; the health and economic benefits to the people in the community and northern Nigeria as a whole; cultural and historical importance to the future generation and as well as cleanliness of the environment.

He said “If the only thing we see in vultures is the opportunity to make money by killing and selling it, using it for ritual and traditional medicines, we are only destroying our lives and future as absence of vultures around us leads to critical diseases and dirty environment”

Representing the Emir of Nguru, Alhaji Lawan Modu, the Village Head of Dumsai Community appealed to NCF not to make this kind of meeting a one-off event, but a regular event to sustain the enlightenment campaign. He also urged that there should be a follow-up action immediately in order to make the points raised sink down into the people. “If there are no activities that will follow this programme, people will forget the talk and continue to do what they like,” he said.

Alh. Goni, the Secretary of Trado-medics, pledged his association’s support to the conservation of vultures and other bird species and encouraged his members to make use of the alternative cure to the use of Vulture.

A drama group engaged by the NCF Project Office performed excellently on the subject matter. The drama depicts activities of hunters and herbalist against vultures and reason there must be shift from the use of vultures for the belief-based and illegal trade in the species.

The “Town Hall Meeting” was held in the palace of the village head of Garbi, a wetlands community of Nguru.

Meanwhile, Harry Hanson led a team to pay courtesy visit to the Emir of Nguru, Alhaji Mustapha Ibn Maikyari, who revealed that he had raised the issue of reviving Hadejia-Nguru Wetlands (HNW) with the Governor-elect of Yobe State, Mohammed Buni. He said he requested from Buni to make HNW one of his top priority during his tenure.

The Emir received NCF’s team with enthusiasm and promised to continue to work for the betterment of the environment. In the team was Mr. Oladapo Soneye of NCF, Dr. Sulaiman Mohammed of Federal University of Dutse and Abubakar Galadima of NTA Damaturu.

NCF hosted some stakeholders at Lekki Conservation Centre in a Project Inception and Induction Workshop to discuss the project, unveil Celebrity Vulture Ambassador and presented its efforts, Birdlife International’s and other partners’ in combatting Illegal Wildlife Trade (IWT). This followed an earlier two-day internal planning with the NCF and BirdLife Project Implementation Team to review the workplan and stakeholders involvement in the delivery of the project.

Dr Muhtari Aminu-Kano, Director-General of NCF, in his welcome address, said that vultures were being “actively harvested” in Nigeria and across Africa for various mystical reasons and that efforts were on by NCF to tackle the menace. He further revealed that the Foundation was carrying out awareness campaign among trado-medics on herbal alternatives to vulture parts as well as seeking collaboration with security agencies on law enforcement.

He said “Vultures are very important, they are our unpaid sanitary inspectors, some people call them garbage collectors, but they are beyond just collectors, they actually clean up the environment and prevent us from having deadly diseases. They prevent the proliferation of pests because they eat up carcasses. If vultures go into extinction then we are in trouble, it means that there will be diseases, there will be deaths, there will be revenue loss to the country and also we will deprive future generations of knowing that vultures ever existed.”

Dr Joseph Onoja, NFC’s Technical Director, while making the project presentation identified hotspots for the trade in vultures in Nigeria to include Osun, Oyo, Ogun in the South-West and Kano, Sokoto and Katsina in the North.

Onoja further explained that vultures were used for ritual rites to cure madness and evil omen, while their eggs were used for money making rituals and some people consume the meat as food.

Dr. Beckie Garbett, Vulture Conservation Manager for Birdlife International Africa, in her project introduction said that efforts were on targeting Nigeria to reduce IWT and trade in vultures and its parts by 20 per cent by year 2021.

Mr. Peter Thomas, the Deputy Head of Mission, British Deputy High Commission, Lagos, while delivering his keynote address said that the British Government has been at the forefront of eradicating IWT which has become the highest criminal revenue spinner after drugs.

He said “The IWT continues to be a global problem, involving serious organised crime networks and work worth up to 17 billion pounds per year. That is more than 75 countries’ Gross Domestic Product (GDP). If that figure alone is not shocking in itself, if estimates for illegal logging and fishing are included, the figure goes up to 114 billion pounds. And that is more than 130 countries’ GDP.”

Meanwhile, in his opening remark, Mr. Adejo Andrew, Director of Forestry, Federal Ministry of Environment, who was represented by Mr. John Timothy Daniel stated that “As the focal point for the Conservation of Migratory Species (CMS) and the African Eurasian Migratory Water Birds Agreement (AEWA) in Nigeria, the Federal Department of Forestry will always collaborate with the NCF on bird conservation related issues as manifested in our various interactions.”

He further mentioned that “This current initiative to conserve the endangered Vultures, with the kind financial assistance by the USFWS fund is a welcome development, as this will also be a tool to conserve the forest ecosystems that provide habitat for the bird and other wild animal species.”

After the opening ceremony, presentations were made by Mr. John Timothy Daniel, CITES Focal Point on Illegal Wildlife Trade in Nigeria, and Mr. Emmanuel Bassey who shared experience of Wildlife Conservation Society in Nigeria’s effort in combatting IWT.

Thereafter, participants drawn from Nigeria Customs, Nigeria Police Force, Traditional Medicine Practioners (native doctors), National Association of Hunters, Federal Ministry of Environments, State Ministry of Justice, NESREA, Academics and media were shared into four groups to contribute and compliment the project. The groups were: Strengthening law enforcement; Alternatives to Vultures for Belief-based use; Wildlife trading and Public Awareness with leading questions on ‘What is the problem? Why is the Problem? What can be done? and What is your role?’

The outcome of these groups’ discussions will further help to realign the project design and activities in order to achieve the project objective.

editor - August 6, 2020 12:06 am
36
The resurgence of killings in Kauru, Zango-Kataf, Kaura, Kajuru and Jema’a local governments in Kaduna State is not altogether surprising. My column, ‘Mass Murder...

The New Face of Afro-Trap