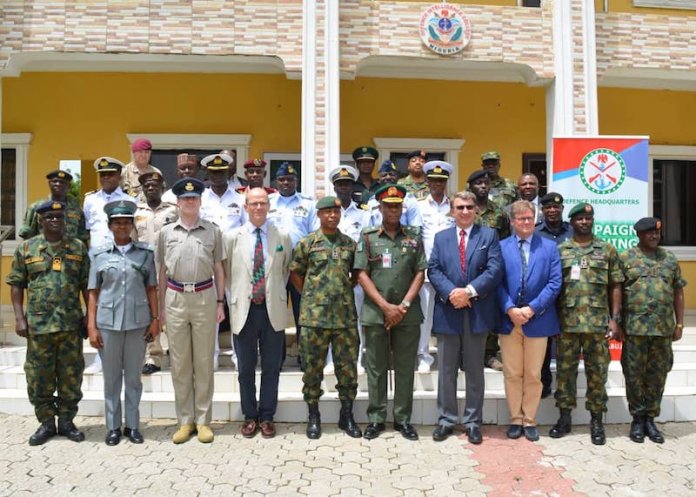 In line with government’s renewed determination to improve joint operations of the military and security agencies in Nigeria and the ECOWAS sub-region, the United Kingdom Military Advisory Training Team (MATT) in collaboration with Defence Headquarters (DHQ) Tuesday commenced a joint campaign planning programme for military, paramilitary officers and high operational level staff of Ministries, Departments and Agencies (MDAs) of government.

This came amid the federal government’s appeal to police chiefs in West Africa to develop a joint operational strategy to eliminate crime and criminality in the sub-region.
Speaking at the inauguration of the training programme, Chief of Defence Staff (CDS), General Gabriel Abayomi Olonisakin, emphasised the need for more effective collaboration among security agencies in tackling insecurity in the country.

He said the main goal of the Joint Operational Planning Course was to further promote efficiency in joint operations, as participants were expected to gain in-depth knowledge on campaign planning necessary for joint military operations.

At the end of the course, he said, the participants would be well grounded in the integrated concepts of joint operational planning.
Speaking during the inauguration ceremony of the course, the CDS, who was represented by the Director Campaign Planning, DHQ, Major General Benjamin Ahanotu, said the course would address the various lapses witnessed in previous and ongoing joint operations, especially, in counter terrorism and counter insurgency operations.

Speaking on the internal security and peace keeping efforts by the Armed Forces, the CDS said joint planning was paramount in the ongoing campaigns, which he described as “asymmetric warfare”.

He pointed out that “military effort alone, could not restore internal peace and security,” saying that synergy and collaboration from the police, paramilitary and MDAs was imperative.

On the training collaboration between Nigeria and United Kingdom, the CDS, commended the efforts of the BMATT towards building the capacity of the Nigerian Armed Forces in order to address its internal security challenges and urged the participants to therefore take full advantage of the course to enhance their knowledge on joint campaign planning.

On his part, the BMATT Facilitator, Wing Commander Nick Limb, expressed optimism that the training would stimulate series of discussions, as well as intellectual and mental exercises which will assist Nigeria to tackle security challenges in a more complex environment, given the new trend of insecurity around the globe.

Wing Commander Limb commended the current DHQ leadership for what he described as “bringing together better cooperation and integration between all arms of military, non-military elements, security services and other agencies of government with a view to empowering them on joint campaign planning.

The course which is expected to last for 2 weeks, is the 6th Batch of participants being trained by DHQ in partnership with BMATT.
Meanwhile, Minister of Interior, Lt. Gen Abdulrahman Dambazau, has called for cooperation and collaboration on the part of security agencies in West Africa.

He spoke at the 16th General Assembly of West African Police Chiefs Committee in Abuja.
He urged the meeting to develop recommendations that would encourage regional collaboration and cooperation between the police and other security agencies.

He said Federal Government was committed to promoting synergy between security agencies, training and retraining in order to achieve international best practice.
In his remarks, the Acting Inspector-General of Police, Mohammed Adamu, said the police chiefs were expected to develop workable mechanisms hinged on robust security exchange and collaboration to further identify, nuetralise and dismantle criminal gangs and recover their illicit wealth.