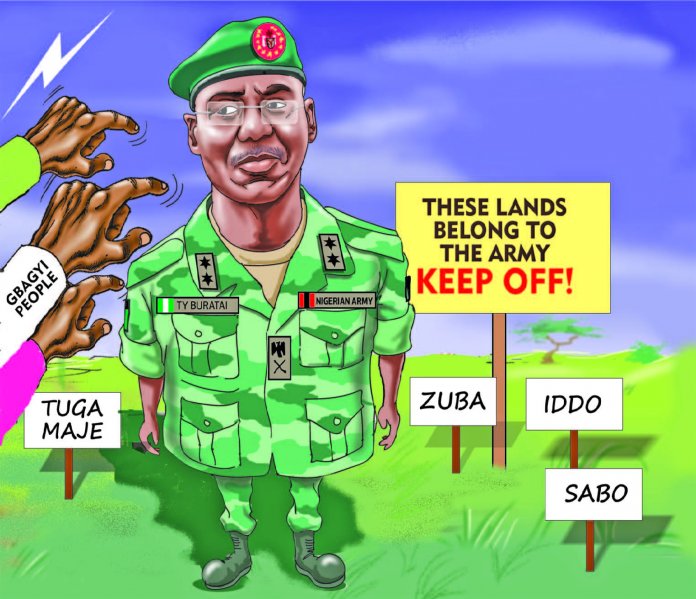 The authorities should look into the land row in the FCT

Against the background that Vice President Yemi Osinbajo was last week caught in the web of the land-grab controversy between the military and the original inhabitants of the Federal Capital Territory (FCT), it is important for the federal government to examinetheir grievances. Comprising mainly of young men and some women from Gbagyi village, they were said to be protesting over the alleged invasion of their land by the military. Although the Chief of Army Staff, Lt. General Tukur Buratai claimed that the land in dispute was “legally acquired’’, we urge the presidency to intervene, as Osinbajo has rightly promised, so that might does not necessarily become right.

It is also important to highlight some salient points for the benefit of the Gbagyi people. The original idea behind Abuja was that it should be everything other than what Lagos turned out to be; and it was not to have settlers, indigenes, traditional rulers, etc. Abuja was selected because it was sparsely populated and not dominated by any of the three major ethnic groups whose struggle for contention was deemed to be one of the nation’s major challenges. Theoriginal inhabitants were to be resettled in the neighbouring states of Niger, Kwara, Plateau and Kaduna while the Abuja Master Plan was conceived on the basis that the entire 8,000-square kilometre territory would not be inhabited.

The plan then was for the respective state governments of Niger, Kwara, Plateau and Kaduna to build new places of abode and provide farmlands to the resettled inhabitants so that their way of life would be preserved to the greatest extent possible. On paper, all the inhabitants of the territory were enumerated, documented and financially compensated. But in reality, the federal government did not meet these obligations to all the people and with that, it unwittingly created a Gbagyi problem in Abuja and environs.

The situation is not helped by the fact that majority of the Gbagyi people are not educated. If the kids are not going to school and their parents live in slums within and outside our glittering capital even in 2019, we can imagine what the situation would have been in 1976. This does not only mean we have a social, economic and possibly political problem that we ought to pay special attention to,it also goes back to the root of the problem: these are weak people who couldn’t have negotiated a fair deal for themselves under the military when their land was being taken from them in the 1970’s.

That is precisely why justice demands that the authorities listen to them. The accusation of the coalition of FCT indigenous associations is that the army has grabbed over 4,000 hectares of land located at Zuba, Iddo, Sabo and Tuga Maje, all along the airport road. But in defence, the army says it has all the documents to the land. The issue here is that of right. As we celebrate the virtues of equal citizenship, it is important for us to defend thosewho have clearly become unequal citizens possibly through their own in-actions and partly through the actions of the Nigerian state.

It is particularly instructive that the crisis is coming at a period when some misguided officials are bent on bastardising the concept of a federal capital designed to accommodate all by imposing some warped values that subjugate women. As with the case of the original inhabitants, Abuja cannot be a place where the rights of citizens are cynically trampled upon under any guise. Therefore, while the authorities might see a sense of entitlement on the part of Gbagyi people, they must nonetheless avoid a situation in which the disempowered and voiceless would be seen as being oppressed. But the Gbagyi elites should also push for the interest of their people rather than just using them as bargaining chips for personal advancement.