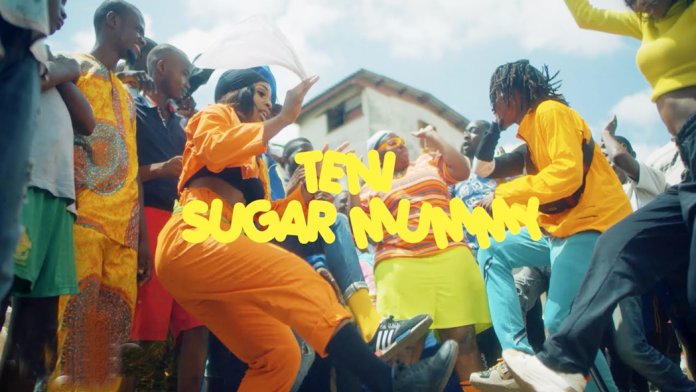 Fast rising musician, Teniola Apata, popularly called Teni the Entertainer, is not resting on her oars as she delivers the video of her street banger, ’Sugar Mummy’. Her latest is another intoxicating thriller for pop music fans, writes

Slangs like ‘Gbe Bodi e’ and   ‘Gbese’ are presently engaging music suckers. ‘Sugar mummy’ is soon to follow suit and as a matter of fact, ‘Baminisale’, which literally means ‘meet me below’, the energising chorus in the just released ‘Sugar Mummy’ video by Teni, are slangs now dominating the airwaves. The video of the song is coming barely a month after the ‘fargin’ crooner released the audio version of the piece which has since been enjoying good airplay.

Teni, known for her quirky appearance and masculine aura, equally put these to play in the close to four minutes colourful video that creatively puts culture and pop to blend. Directed by DK, the video was set in Shitta, a popular area in Surulere, Lagos, which is arguably the headquarters of Marijuana in Nigeria. This offers inkling of the theme of the anthem. Aptly, the piece simply mirrors the way of life and routine in the area, which is masterly characterised by liveliness and rowdiness.

This is  reflected in ‘Sugar Mummy’s’   settings,  language, casts dressing, dance steps,  and a  show of superiority that ensues  between the self-acclaimed Area Mama and another plus sized  Nollywood  celebrity, Eniola Badmus, while their loyalists try to refresh the duo  with hand fan as spectators look on. The street hop act has carefully selected her elements to convey the no-nonsense and kingship control of Area Mamas within their respective jurisdiction.

The song, which is enjoying rave reviews, sure promises to spice up street life and takes a special positioning on deejays’ playlists, especially as it rhymes with the popular Zanku beat.

The multi-talented act has graduated to a top tier character that is fast penetrating the centre stage of the entertainment industry. Aside reigning in the music space, Teni is equally not doing badly as a drummer and songwriter. Her songwriting skills became known to many after she was engaged by Davido to write his song, ‘Like Dat ‘.

While she has been able to carve a niche for herself with her tomboyish ways and looks, this has been reproved unnumbered by people who feel she is taking it to the extreme. But, the American Intercontinental University graduate obviously cares less. She opens up in a recent interview, “There’s an assumption that women have to look a certain way to be feminine, but I don’t want to conform to that stereotype, my thing is this: You don’t get to decide how I choose to live my life. I’m being me – respect that. UGA, the university I went to was a predominantly white institution. I remember someone even asked me if I had elephants in my backyard, it was wild. The other students would look at me crazy when I showed up to class in traditional dress, too. But you know that’s who I am. That’s my culture. If you can wear your blue jeans, I can wear this.”

Teni, like her sister, Niniola, has had her fair share of recognitions in the industry and the most recent being ‘the Most Promising Act to Watch’ at the Nigerian Entertainment Awards, 2018. With 11 singles and three featured appearances in her credit in just three years of stardom, the Dolor Entertainment act may be flying above the seventh heaven in a very short time.