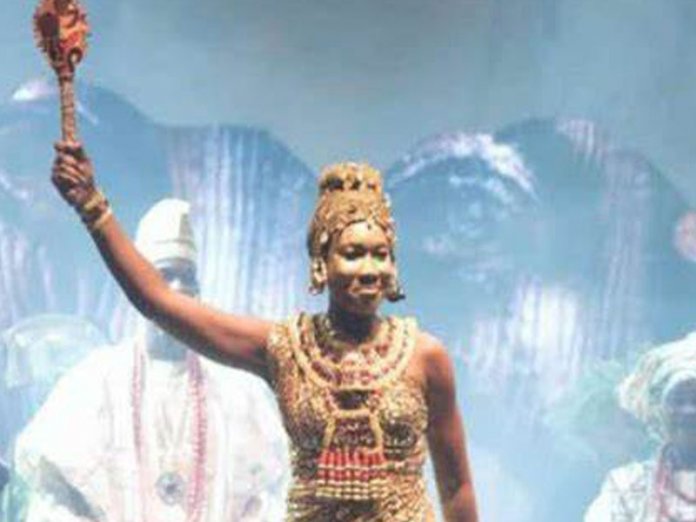 The second season of Moremi the Musical during the last Easter holidays started with an opening night for family and friends. It was a season that many theatre goers realised that they had to pay a little more than expected for the regular tickets and presumably other premium tickets. BAP tickets are usually the fastest selling in Nigerian contemporary theatre. From Saro to Wakaa the Musical, many had explored the online platform to buy tickets instead of waiting till the day of performance and be told that the shows are sold out.

No doubt, Moremi the Musical is a heavy spectacle theatre production, as characteristic of Bola Austen-Peters’ productions. For its second season, the show lived up to the script that narrates the story of Moremi, a brave warrior who saved the Yoruba race from the vicious hands of terror from a rival tribe. It is a story of courage with a feminist slant which is supported by the House of Oduduwa and the wife of the Governor, Ogun state, Mrs. Ibikunle Amosun.

The Ooni of Ife, Oba Adeyeye Enitan Ogunwusi had recently demonstrated his support for this production because of its celebration of cultural narratives. The amiable monarch and culture custodian had been a frequent visitor to the theatre at Terra Kulture in Victoria Island Lagos during festive seasons, thus showing to the world the importance of theatre in the cultural landscape of the people.

With Moremi the Musical, the African storytelling tradition had been upscaled what with the use of psychedelic lighting techniques, electronic backdrops, custom-built costumes and props, amongst others. Therefore, it is no surprise that the premium entertainment brand is really on high demand.

In a bid to understand the rationale for increasing the ticket prices in the face of growing theatre competitions in the city of Lagos, THISDAY probed into the circumstances that led to the second season of Moremi the Musical.

THISDAY investigation revealed that Moremi the musical has added value to the cast and crew’s personal brands thus their managers had to renegotiate their contract with the theatre company.

A reliable source at BAP revealed that the cast and crew demanded for a raise in pay which necessitated the little increase in the ticket price. BAP took that crucial decision to retain the same cast of the play for it to maintain its steam of quality showmanship.