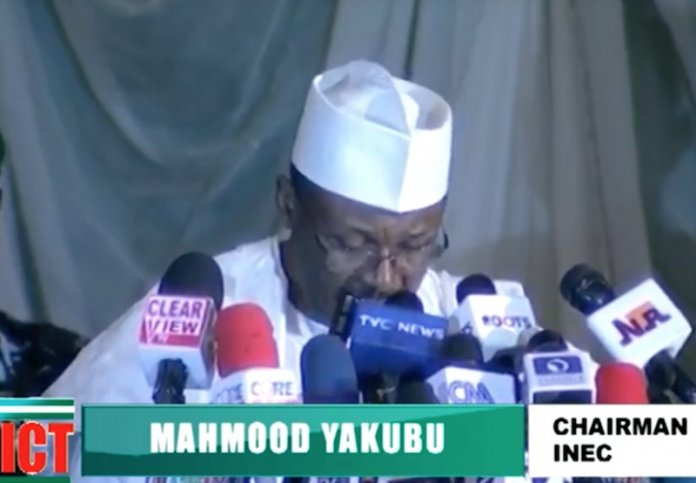 The Independent National Electoral Commission (INEC) has said that despite its policy to be transparent, some of the materials used in the election are sensitive and cannot be exposed.

The Chairman of the commission, Professor Mahmood Yakubu, disclosed this yesterday in Abuja at the 2019 Press Freedom Award, organised by the Nigerian Union of Journalists (NUJ).

Yakubu who was represented by INEC National Commissioner and Chairman Voter Education and Publicity, Mr. Festus Okoye, also cautioned against the dangers of fake news, and especially its destabilisation power on the society.

The chairman noted that it is challenging dealing with deliberate misinformation, especially information relating to the intentions of the commission, saying its processes could be difficult to communicate.

He stated: “The issue of fake news is now a big issue. It is now difficult to filter fake news and real news. The tragedy is that in a society where rumour- mongering is a big national challenge, fake news can destabilise the society and lead to complete breakdown of law and order .

“It is also challenging dealing with deliberate misinformation. Information relating to the intentions of the commission and its processes can be very difficult to communicate. While it is the policy of the commission to be transparent, some of the materials used in the election are sensitive and cannot be exposed,” Yakubu explained.

Yakubu stressed that the media must see the commission as a critical national treasure and strive to support it , and where necessary, criticise it in a constructive and not in a destructive manner.

The INEC chairman also explained the differences between the INEC and the State Independent Electoral Commission (SIEC), noting that many people in the past have used the two interchangeably and thus, confusing their roles.

He said that the media must therefore be abreast and knowledgeable of the statutory role of the INEC and SIEC, adding that often, the media group and organisations use both interchangeably and confuse the role and place of both institutions in the electoral process.

“So, the constitution and the law obligate the INEC to hand over the voter register to the SIEC for them to use in the conduct of local government election. Other than that there is no nexus between what the SIEC does and what INEC does at the national level,” he added.

Yakubu however urged journalists to have a good knowledge of the constitution and the electoral framework for the conduct of elections, saying that reporters on the political beat should know that anyone aspiring to the position of the president in country must be a Nigerian by birth, while an aspiring member of the National Assembly or State House Assembly or can just be a Nigerian by naturalisation.

The INEC boss assured that the commission was committed to providing a level-playing field to its numerous public and a quantitative, and seamless electoral services for the electorates in all its actions and operations.

According to him, “having a multiparty democracy is not akin to having 1000 political parties that espouse almost the same ideology. So we need a national conversation.”

On his part, the President of NUJ, Mr. Chris Isiguzo, said that Press Freedom Award has become an annual event to confer award on journalists and friends of the media who have distinguished themselves in supporting and propelling press freedom in the country

He added that journalists throughout the world are increasingly faced with threats ranging from harassment to arbitrary detention, kidnapping, physical attacks and in most extreme cases killing.