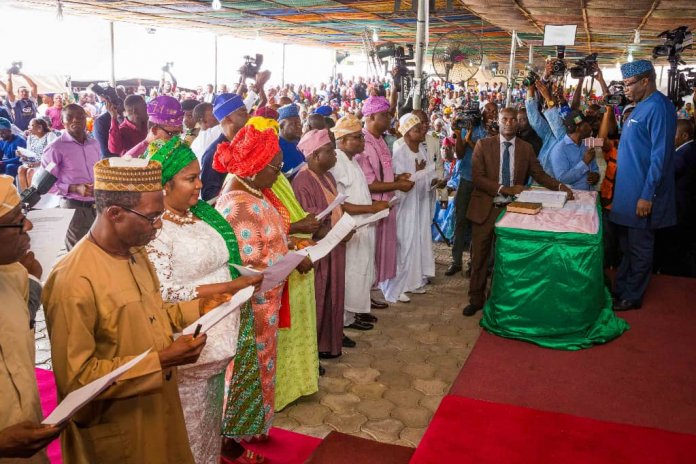 Raheem Akingbolu writes that with the representation of the diversity of Ekiti State in his cabinet, Governor Kayode Fayemi has addressed a pressing concern that subtracted from the gains of his first tenure

One point that is sacrosanct about politics is that it is majorly about interest. In this regard, interest could be of religion, senatorial district, community and pressure group within or outside the party. Politicians believe that the moment one of them is appointed; their constituency’s interest can be protected. That is why an average governor of a state or the president of a country, who wants to stand the test of time, strives, despite all odds, to factor in various interests in his appointment.

Of all the criticisms thrown at President Muhammadu Buhari, the most severe centres on his choice of appointees who are generally believed to come from a certain part of the country, to the detriment of the rest. Despite all efforts by his handlers to offer an explanation, the matter remains a sore point among the political elites outside the Hausa/Fulani’s geo-political zone.

From whatever angle one chooses to look at it, the current governor of Ekiti State, Dr. Kayode Fayemi, appears to have given a studious thought to the issue. Placed side-by-side the approach of his predecessor, and many governors across the country, Fayemi is determined to pass the test of narrow-mindedness. Though, former Governor Ayodele Fayose was popular on the streets of Ekiti because of his populist approach to governance, many groups, within and outside his government remained embittered throughout his reign because they were side-lined. These aggrieved parties cut across ethnic, religious and professional groups.

During Fayemi’s first term in office, he also received a lot of knocks for his appointment. He was not criticized for not reflecting the diversity of the state in his appointment. Critics of his government argued that he gave preference to ‘Ekiti abroad’, otherwise tagged ‘ipad politicians’. To support this argument, they mentioned scores of Fayemi’s friends, who were not with them during the struggle but were invited home from their comfort zones abroad to become commissioners or special advisers.

Fayemi appears to have learnt from the seeming mistake of his first tenure. It is a different ball game today. From his current appointments which were done in bashes, Fayemi has displayed a high level of maturity by going local, as well as, trying to pacify all the warring parties, including the supporters of those who contested last year’s governorship primaries with him. Since last month when he concluded the list of the advisers and commissioners, political pundits have not stopped reviewing and accessing some of the personalities who constitute his cabinet.

Mrs. Mojisola Fafure: A local politician based in Ikole Ekiti, Fafure, who is popularly known as ‘Eye Meje’ is the current Commissioner for Women Affairs. Before her appointment, the woman, who is believed to be a thoroughbred politician had also served as Ekiti North Senatorial Women leader. It is believed in many quarters that her appointment would boost participation of Ekiti women in politics.

Adio Folayan: In the Efon Alaaye political space today, there is hardly any politician that parades the kind of resume that Prof. Adio Folayan is bringing to the table. When it comes to understanding the nuances of local politics and blending it with scholarship, Folayan comes tops. His appointment was greeted with deafening applause because of his loyalty to the party, having remained in the progressive camp since the days of Alliance for Democracy. During Fayose’s term when the All Progressive Congress was nearly reduced to insignificance, Folayan still contested the Efon Alaaye Local Government Chairmanship position against the candidate of the ruling Peoples Democratic Party (PDP). Due to his popularity, the State Independent Electoral Commission had to shift the Efon local government election, alongside two other local governments, to another date. Though he eventually lost, the result of the election remained a subject of controversy till today. For his loyalty and commitment to his people, Fayemi appointed him a Local Government Caretaker Chairman and later Commissioner for Agriculture during his first term in office. He is currently the state Commissioner for Local Government.

Afolabi Ogunlayi: Alhaji Afolabi Ogunlayi wears many caps; a politician, religious leader and technocrat. A native of Ikole Ekiti, Ogunlayi, who served as Chairman, Civil Service Commission during Fayemi’s first term, had twice served as commissioner; first in Ondo State, prior to creation of Ekiti State and later in Ekiti. As the current Senior Special Adviser, Economic Matters and Chair, Economic Development Council, there is no gainsaying the fact that his appointment alongside other Muslims in the cabinet, would give the Muslim community a sense of belonging.

Gbenga Agbeyo: A former Ido-Osi Local Government Caretaker Chairman, Agbeyo is also a home-based politician. For over a decade, Agbeyo, who was a close ally of the late former deputy governor, Adunni Olayinka, has been living in Ekiti State. He is the current Commissioner for Environment.

Wale Ojo-Lanre: A native of Usi Ekiti, Wale Ojo-Lanre, who was recently appointed as Director General of Ekiti State Council of Arts and Culture personifies culture and tourism, having reported on these sectors for the better part of his career as a journalist. He is also a proud Ekiti ambassador. A consummate journalist and authority in culture and tourism matters, Ojo-Lanre’s appointment didn’t come as a surprise to many people because of his belief in the Fayemi project and the area he has been appointed to oversee. Having served as Chief Press Secretary to former Governor Segun Oni, pundits believe his appointment like the Senatorial ticket ceded to Senator Olubunmi Adetunmbi, Segun Oni’s kinsman from Ifaki, who also led Fayemi’s transition committee, has confirmed Fayemi’s magnanimity.

Ayodele Jinadu: Apart from the fact that Jinadu’s appointment as Commissioner for Special Duties and Regional Integration is a reward for loyalty, settling for him also serves the interest of Ado Ekiti and the Muslims in the State. Like most of the appointees, Jinadu is a home based politician, who has remained in Ado Ekiti, where he runs a stationery shop for over 40 years.

Sola Salako-Ajulo: Though a Lagos-based communications expert and consumer rights advocate, Salako-Ajulo’s appointment can be said to be strategic for effective communication of government activities. She is bringing huge experience garnered over the years in the field of Public Relations to the table to complement the efforts of the Governor’s Chief Press Secretary, Olayinka Oyebode and Segun Dipe, who manage social media and other related communication channels.

Dr. Sikiru Eniola: Beyond taking care of the interest of those in academics among Fayemi supporters, the appointment of Dr. Sikiru Olugbenga Eniola, a former Chairman, Academic Staff Union of Universities (ASUU), Ekiti State University chapter, also serves other interests. His appointment serves the interest of the human rights community, Muslims and Ado Ekiti, the state capital and most populous political constituency.

Other appointees who have been described as perfect choice and grassroots politicians, include; the Commissioner for Lands, Housing and Urban Development, Febisola Adewale, (Emure), who was a former House of Assembly member; Commissioner for Budget and Economic Planning, Femi Ajayi (Ise Orun) a Chartered Accountant who had also served as Local Government Caretaker Chairman and the commissioner in charge of Investment, Trade and Industries, Olusoga David (Moba), who was also a former local government boss.

A Senior Lecturer in the Department of Political Science at the University of Ado Ekiti, Dr. Mike Omilusi, commended the governor for the spread and quality of the appointees, but urged him to deliver on his electoral promises by providing basic infrastructure for indigenes of the state.

“Much as I agree that provision of basic infrastructures and services is one of the most important functions of government, appointment of credible individuals to various ministries and parastatals of government is also key to enhance effective administration, especially in a democratic setting. Having said this, I urge the governor to keep to his electoral promises by providing basic infrastructure and services in the interest of the masses.”

The university don, who also commend the speed at which the appointments were made after the general election, called on President Buhari and the incoming governors in other states to take a cue from Fayemi to enable the machinery of government function fast and smoothly.