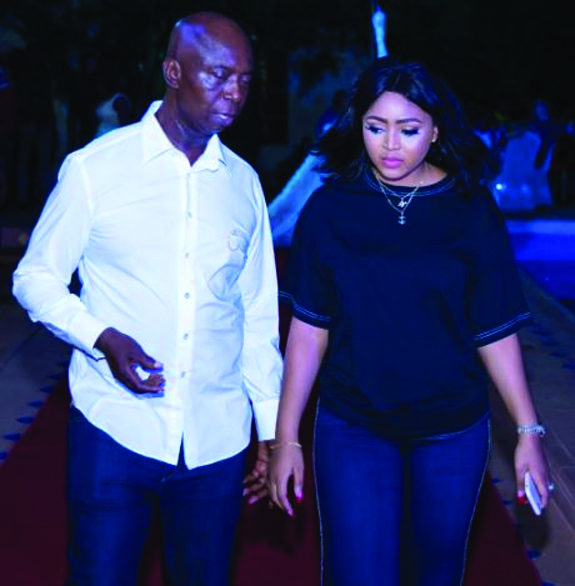 Young Nollywood star, Regina Daniels, is enjoying all the glitz associated with befriending billionaire businessman and politician Ned Nwoko. The last few days saw Regina making numerous public appearances with Nwoko. The secret marriage of the love birds is no longer looking like one of the tales from Nollywood, writes Ferdinand Ekechukwu

After a supposedly traditional introduction ceremony held quietly in Regina Daniels’ family compound in Asaba, Delta State, the news was quite rife that the young movie star and her billionaire businessman had secretly tied the knot. As it seemed, not a few had doubted the veracity of the gist of Regina’s romance with Ned Nwoko.

It became a very big issue of public interest early in April after the news of their marriage circulated further. Regina is believed to be Nwoko’s 6th wife. Both Regina and Nwoko, a former House of Reps member, did not deny the rumour even as it dominated the blogosphere and social media space. There was further confirmation with Regina seen displaying opulence nestled in expensive cars, wristwatches and mansions and being flown in a private jet.

On few occasions, she was spotted cruising around Abuja in a red Ferrari. Late in March 2019, Regina set tongues wagging after she showed off a Rolex wristwatch she bought for over N3 million. In the same month, the ‘Dumebi in School’ actress shared pictures of a house she bought for her mother and two Mercedez cars she acquired.

She had earlier flaunted a new Brabus G Wagon, all supposedly courtesy of billionaire Nwoko. One could then imagine the reaction that greeted keen observers and their followers seeing pictures of the “couple” trend online when they stepped out for the first time at an event last weekend.

The two had attended a convocation ceremony where Nwoko was awarded a honourary doctorate degree by the Federal University of Petroleum Resources (FUPRE) in Effurun, Warri Delta State. This public appearance put paid to the rumours of the marriage.

Soon after the ceremony, the actress and her billionaire husband were filmed digging it on the dance floor in a manner that depicts Regina in her ‘small girl, big god’ mood at the after event party anchored by ‘Reggae Blues’ crooner, Harrysong. In the video also was Regina’s mum, Rita Daniels. Further footage showed Nwoko introducing Regina to one of his wives, a Moroccan.

Prompted by the footage, this writer who had been in talks with the mum to interview her daughter put a call through to her about the news making the rounds concerning her beloved daughter’s marriage to the billionaire businessman and politician, of which Rita responded thus… “I don’t understand what do you want me to comment about,” and quickly put off the phone.

That was before she stated she would be in Abuja this weekend. Attempts to reach her immediately afterwards were turned down as she refused to take further calls. Nwoko, a strong pillar in PDP Delta State where Regina hails from, a lawyer by profession, could be described as a “sweet old wine” that young actress is sipping happily.

Regina, the fifth child in a family of six siblings made her professional debut appearance in the 2015 widely acclaimed Nollywood movie, Marriage in Sorrow. Regina’s mother, Rita, is well known in the movie industry. She is an actress and a prominent member of the Actors Guild in Delta State. Rita is said to have been very supportive of her daughter’s acting career.

Raised by a mother who is grounded in acting, it is not surprising that it only took Regina a few years to become conversant with the rudiments of the arts. The star actress emerged on the Nigerian entertainment scene at a very young age of seven featuring in a slew of Nollywood movies due to the pivotal roles her mother played in pushing her to stardom within the movie community.

Regina draws strong influence from her mother Rita on whose dictate the wedding was believed to have been consummated. On one instance, Regina had declared: “The Journey of Regina Daniels started with a woman (Rita Daniels). You were determined to see me succeed, you dropped your own career for me, took lots of insult from people who now beg to feature me in their movies, you hawked, you carried cement just so we could have a roof over our head, you pushed wheel barrow to earn money, you did lots of hard jobs just for survival.”

The mass communication student of Igbinedion University, Benin, added: “I know that no matter what I do, it can’t repay you for all that you have done. You dropped your marriage for our sake, suffered a lot, you didn’t have a life of your own, you lived your life all for your children (birth and adopted). You feel my pain even without a single word from me. Thank you mummy for being you. Happy birthday my world.”

In her precocious wisdom, she had sworn allegiance to her mum whom she owes her all. “My mum has always been there for me. I owe her a lot. It was through the help of my mother that I started acting. I didn’t really see myself reaching this stage. It all happened all of a sudden. My mother suffered and made sure I got to this stage in life. Till now, I don’t really have any challenges because my mother is always there, guiding me and also protecting me.”

Regina Daniels is quite outstanding and unique. Not just because of her fame in Nigeria and beyond but also because of her thriving success. The starlet’s first movie, as she once shared, fetched her N10,000 but as time progressed, Regina began scoring lucrative acting gigs that was putting an average of N100,000 in her pocket.

During a recent interview, she disclosed that she gets N500,000 per movie. She further revealed that she had been working on herself so as to become a household name in Africa and beyond. At the moment, there are several conflicting reports on how much Regina makes for roles in Nollywood. With Regina’s status elevation by Nwoko, it would not be surprising if the actress raises her appearance fee for movies.

While little is known about his other wives, in spite of being away from politics, Nwoko was never away from the news. Some years back, perhaps in giving vent to his architectural streak, he designed and built a wondrous home on a large expanse of land in his native Idumuje-Ugboko, Aniocha North Local Government Area of Delta State. The eye-popping edifice, nicknamed ‘Castle in the Air,’ is a combination of Arabian and western designs complemented with a royal traditional touch which experts have described as tourists’ destination.